I recently started using a prescription tretinoin cream, a generic version of Retin-A. Tretinoin is probably THE most popular and evidence-supported prescription retinoid (vitamin A derivative), and works as an acne treatment, for anti-aging, and a generous handful of other skin issues. I’ve had a lot of requests for advice and tutorials on how to start on retinoids, how to stop peeling, and what sort of routine to use while on them, so I can finally talk about it with first-hand experience and way too much detail!

Tretinoin, also known as retinoic acid, is an active form of vitamin A. It’s sometimes called all-trans-retinoic acid to distinguish it from isotretinoin (13-cis-retinoic acid), which is the active ingredient in the highly effective acne medication Accutane. Vitamin A derivatives (retinoids) are one of the most studied categories of skin actives, since they work really well to fix a range of things including acne, pigmentation and aging. 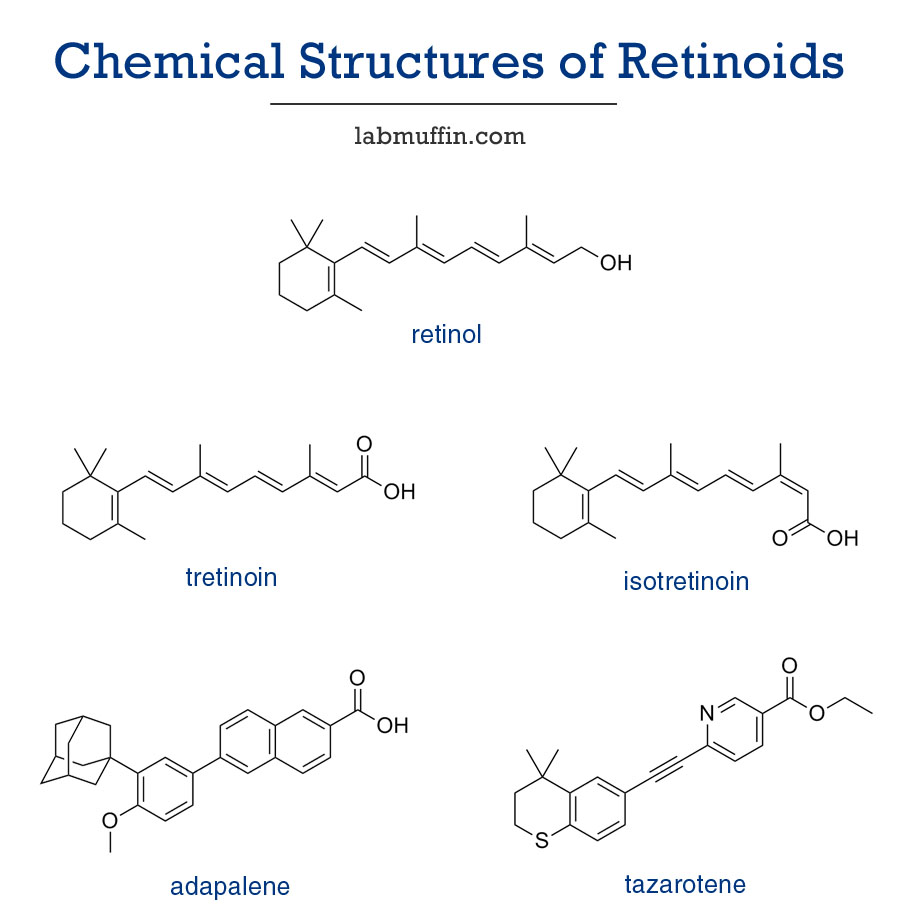 Retinoids work in a bunch of different ways. They affect the way skin cells grow and develop, and increase how quickly skin cells are shed. This means that for acne, it’s harder for comedones (clogged pores) to form, and any that you already have will be pushed out faster. Open pores also let more oxygen in – the P acnes bacteria that inhabit inflamed pimples can’t survive when they’re exposed to too much oxygen, so they’re less prolific. Retinoids are also anti-inflammatory as well, which is awesome since inflammation is one of the things that causes acne.

The main drawback to using tretinoin is that it’s quite irritating and often gives you dry, flaky skin that’s more prone to stinging and redness. This is worst in the first few weeks until your skin gets used to it, but for some people (around 15% of people) this doesn’t happen at all, and for others it can take 6 weeks to clear up.

Tretinoin is one of the more irritating retinoids, but it’s also the one with the most studies to back up its benefits, so I decided to go for it anyway. Tazarotene is more irritating, while adapalene (Differin), retinol and retinaldehyde are less. In particular, tretinoin causes dryness and peeling.

I was prescribed a 0.05% tretinoin cream. Tretinoin comes in a range of concentrations from 0.01% to 0.1%, and lots of different formulations (time released, gel, creams etc.). Cream formulas are gentler than alcohol-based gels even though tretinoin seems to penetrate better from a cream (I would guess it’s because wet skin is more permeable than dehydrated skin, and the cream base acts as a built-in moisturiser). Time-released formulas are also gentler, but more expensive.

I’ve also found that there’s a lag time of about two days between me using a retinoid product, and actually experiencing the irritation and flaking. This means instead of monitoring my skin and adjusting my routine as usual, I had to take extra care to pre-empt irritation.

Short contact therapy: This is where you apply the product like a mask, and only leave it on for a short amount of time before rinsing it off. There are a few studies where short contact gave good results – in one study on acne, daily 0.05% tretinoin cream applied for 30 mins gave comparable results to leave-on tretinoin, and a lot less (~20%) of people had irritation even without moisturiser, compared to over 80% normally. 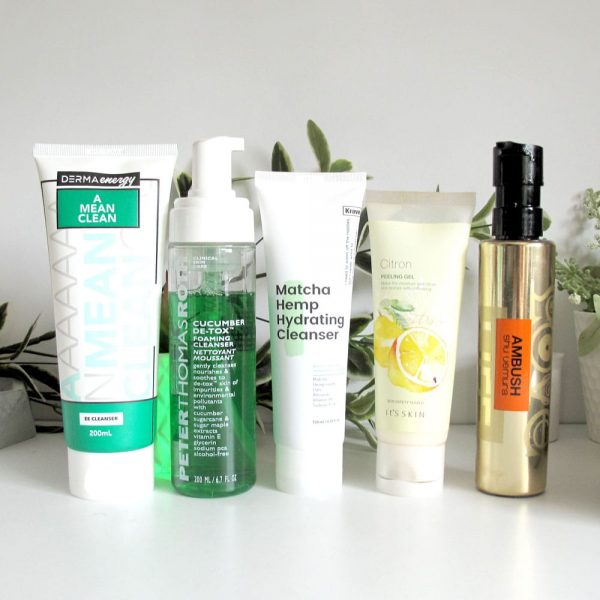 Gentle exfoliants: I’m usually quite gung ho with acids, but I decided to step it down and stick to lower percentages (like Pixi Glow Tonic or KraveBeauty Kale-lalu-yAHA). Physical exfoliants were limited to peeling gels only (I’ve been using It’s Skin Citron Peeling Gel), and with minimal pressure (more on exfoliation in my Exfoliation Guide).

Sunscreen: Sunscreen is a must while on retinoids, so I slathered up every day with my usual sunscreen, Ultraceuticals Daily Moisturiser. It’s alcohol-free, so it didn’t cause any massive stinging. 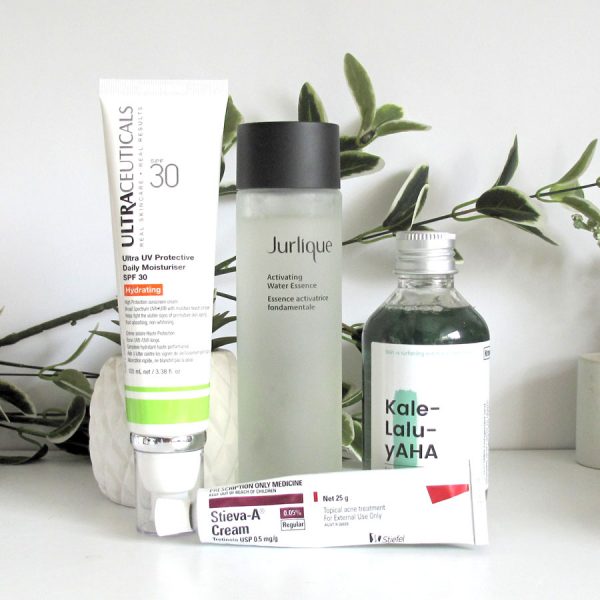 Moisturiser: Bucketloads. I used a mix of oils and anti-irritant moisturisers: Huxley Secret of Sahara Oil Light and More, rosehip oil (I used Freezeframe’s rosehip blend), Stratia Liquid Gold, Dr Jart+ Cicapair Cream and Bioderma Cicabio. The two “cica” products contain the popular skincare active Centella asiatica, which I’ve written about before – it’s supposed to help healing, so I thought maybe it would be good for dealing with tretinoin irritation. 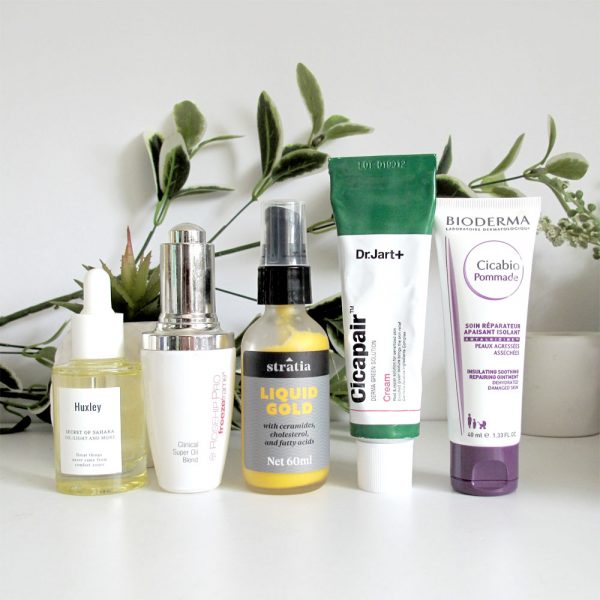 Application: I slathered a thick layer of oil (Stratia Fortify or Huxley Secret of Sahara Oil Light and More) on my face, then applied a very small amount (maybe ¼ pea) of tretinoin cream on top. The oil helped the cream spread really nicely. I did this every second day.

Irritation: Here’s when the peeling started in earnest. My peeling has a lag time of around 36 hours, so I kept thinking I was off the hook but then my skin would start peeling in the middle of the day when I didn’t expect it. But then it’d clear up after a day. There was also some dryness and very mild stinging.

After the second application I zoned out during my skincare routine and ended up applying 10% AHA… bad idea! It left my skin feeling tight and stingy the next day when I applied sunscreen. I tried some 5% AHA later and it was fine, so I banned my regular acid exfoliants from my skincare table until further notice.

There was also a noticeable difference between the Stratia Liquid Gold and Dr Jart+ Cicapair Cream sides – Dr Jart+ was significantly better at calming down the flaking than the Stratia. I also tried the Bioderma Cicabio product, but I found that it was a bit too thick and gave me a few whiteheads near my nose (probably also partly from the irritation).

Results: I usually get a few big pimples around this time of month, but I didn’t get any which was nice but could have also been a fluke. I also noticed that some post-inflammatory hyperpigmentation from a couple of old pimples was clearing up faster than usual.

Irritation: For the first week there was some flaking around my nostrils and chin, but it was only visible near the end of the day thanks to foundation, and there was no irritation! By the end of Week 4 I was able to use tretinoin every second day.

Here’s where disaster struck and I tested a foundation that gave me an irritant breakout. I haven’t broken out from a foundation before, so it’s possible that the tretinoin-induced irritation made my skin more sensitive. During this week I switched over to my emergency breakout routine and didn’t use any tretinoin.

I was a bit worried about going back on tretinoin, since I built up my tolerance so carefully. But I applied 1/4 pea of tretinoin cream on my dry bare skin after my breakout subsided, and to my surprise there wasn’t any irritation! So for me at least, tretinoin tolerance doesn’t go away in a week. I moved up to a 1/2 pea-sized amount every second day and it was still fine.

Here’s where I am now: a 1/2 pea-sized amount, every second day, with mild acid exfoliant once a week on a day when I’m not using tretinoin. There’s no irritation, and I don’t have to use any special moisturisers (although I’m still using Stratia Liquid Gold on most nights). 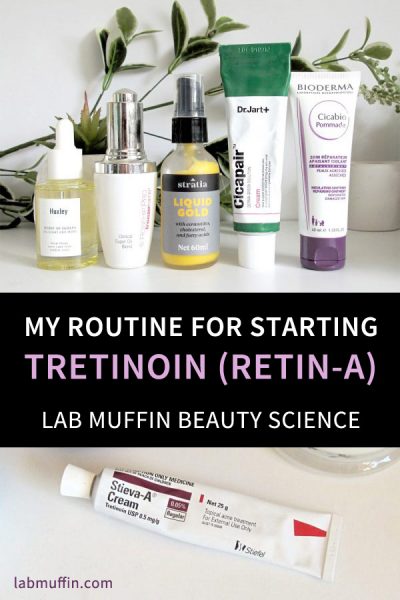 Some of these products were provided for review, which did not affect my opinion. This post also contains affiliate links – if you decide to click through and support Lab Muffin financially (at no extra cost to you), thank you! For more information, see Disclosure Policy.

« Dissolving Microneedle Patches: Science and Review (Vice Reversa)
Behind the Scenes at Bioderma »