Centella asiatica’s been in skincare for a long time, but it’s really getting its time in the spotlight at the moment. What is it and what does it do? Here’s the science behind this trendy botanical ingredient.

What is Centella asiatica?

Centella asiatica, also known as Gotu Kola and Indian pennywort, is a herb that’s been traditionally used in Indian Ayurvedic medicine. In some Asian countries the leaves are used in salads and drinks. It looks like this: 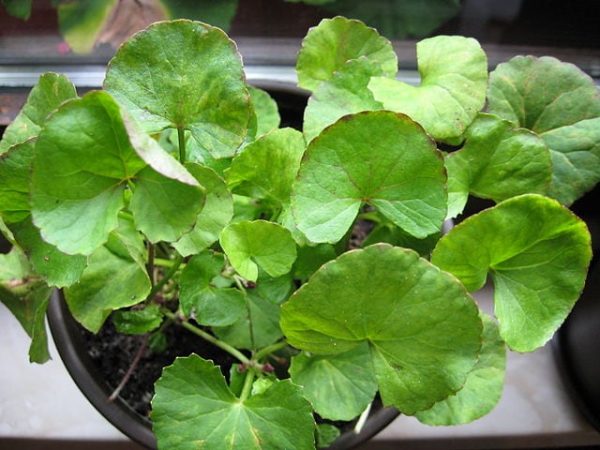 Centella asiatica contains a bunch of active ingredients known as terpenoids, which make up around 8% of the weight of the plant. The main four that have been studied for their skincare benefits are asiatic acid, madecassic acid, asiaticoside and madecassoside. They’re sometimes included in a product alone in pure form, or in combination as “Centella asiatica extract”. The terpenoids have very similar activities. 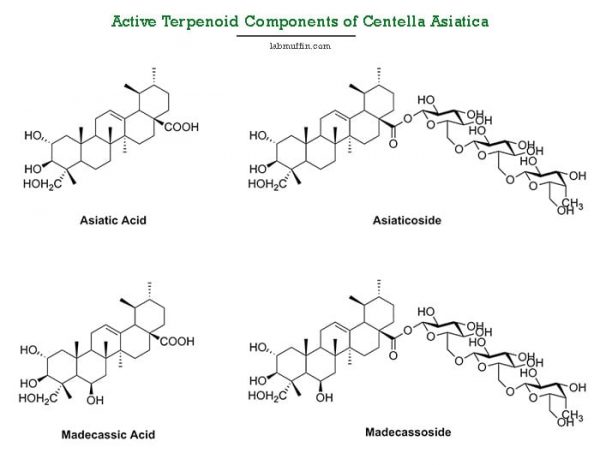 Along with the terpenoids, there are also other components that have skincare benefits: antioxidants, humectant moisturisers and vitamins.

What does Centella do?

Centella is most famous for its healing properties – a lot of Centella products contain the prefix “cica-” which, as a lot of astute readers have informed me, refers to its cicatrising or healing/scar-forming abilities.

Most of the published studies are in vitro or animal studies – there’s a nice summary here. The few clinical trials on Centella and its components are quite annoying as well, because it’s frequently combined with other ingredients so you can’t tell if it’s Centella or the other ingredients doing the majority of the work.

Overview of some Centella skincare products 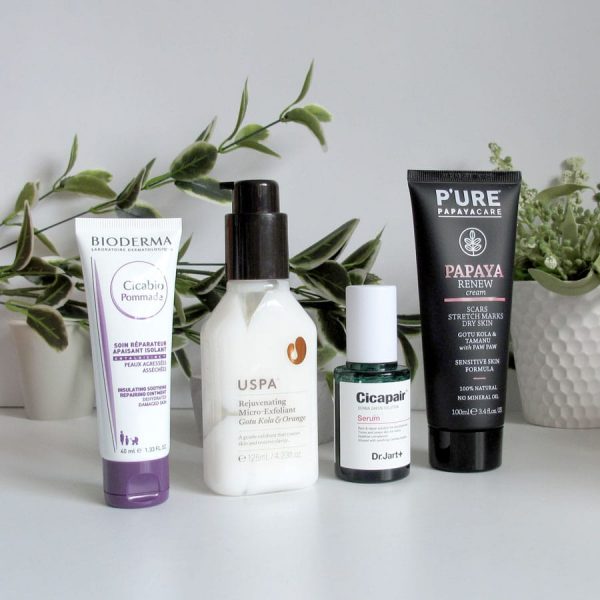 I’ve tried a few Centella products lately. I’ve also been using La Roche-Posay Cicaplast for quite a while for healing inflamed skin like in my chapped nose routine, even before I realised that the magic ingredient was Centella! Specifically, Cicaplast contains madecassoside as its Centella active, along with copper, zinc, manganese, and a whole bunch of moisturising ingredients to help speed up healing.

My current favourite Centella product has been Bioderma Cicabio, which contains Centella-derived asiaticoside, asiatic acid and madecassic acid alongside resveratrol and copper to promote healing and zinc to control bacteria. Cicabio also contains Bioderma’s patented Antalgicine, which reduces itching (I think it’s some combination of Laminaria ochroleuca extract and acetyl dipeptide-1 cetyl ester). I’ve tried both the Pommade and the Creme. The Pommade has a much stickier ointment texture, while the Creme sinks in much more easily. I used the Pommade on a skin rip I got from Crossfit, and found that it was fantastic at sticking in place.

Uspa Rejuvenating Micro-Exfoliant is a leave-on exfoliating product that contains Centella asiatica extract, along with salicylic acid and a bunch of other botanicals. I’ve only used this a couple of times so I haven’t seen any exciting results yet, but it has a nice texture.

Dr Jart’s Cicapair range includes a serum, and three creams (Re-Cover, Re.Pair and one that’s just a Cream). They all contain Centella asiatica extract alongside the four terpenoids (asiaticoside, asiatic acid, madecassic acid and madecassoside) added separately as well. The ingredients lists are pretty long and they contain other beneficial ingredients as well like niacinamide. I’ve tried all four products. They’re really nicely soothing and the green tint neutralises redness on your face nicely, although I’ve found that I haven’t really used them in the day because they seem to be better tailored to dry skin.

Pure Papaya Renew is a new product from Pure Papaya Care. It’s a cream that’s meant to reduce the appearance of scars, stretch marks and dry skin, with Centella asiatica, tamanu oil and papaya as its key ingredients. The cream smells really nicely of vanilla, and has a lovely texture that’s not too heavy. While the product seems pretty good, I’m not a fan of the marketing, which is a bit pseudosciencey (“60% of what you put on your skin is absorbed into the bloodstream”, anti-mineral oil, “100% natural”).

Have you tried Centella products? What were your favourites?

Products were provided for review, which did not affect my opinion. This post also contains affiliate links – if you decide to click through and support Lab Muffin financially (at no extra cost to you), thank you! For more information, see Disclosure Policy.

« Common Rosacea Questions with Dermatologist Dr Estee Williams
Why Vitamin C Can Stain Your Skin (and How to Avoid It!) »