Have you ever wondered what’s in a lipstick? Obviously there’s the colouring agents that make it red or pink, but what’s all the other stuff? Here’s what your lipstick is made of, if we separated all the components (long wear lipstick is a whole different beast – we’re just talking about the standard bullet-in-a-windup-tube version here): 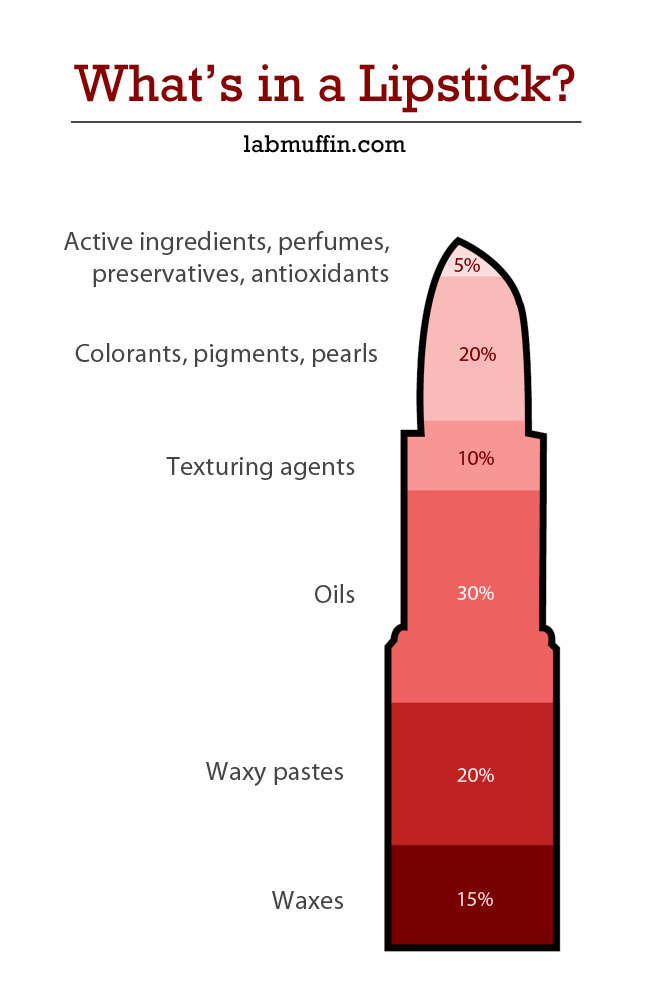 Depending on the lipstick, the composition will differ, but a standard lipstick will contain:

Most of the lipstick is made of waxes and oils (some people divide these into a third category as well, waxy pastes), which form the base of the lipstick.

Waxes are oily, water-repellent ingredients that are solid at normal temperatures. They’re responsible for ensuring that most of your lipstick bullet stays hard, even when you’re pressing it against your lips. However, the overall formula also needs to be soft enough that friction and body heat will melt the lipstick a little and transfer onto your lips. The higher the melting point, and the more wax there is, the harder the final lipstick (a general rule in chemistry is that the properties of a mixture reflect the properties of the components, with larger proportions meaning the mixture will have more properties of that substance – like how a cake with more butter will taste more buttery, and a cake with more sugar will taste more sugary). Common waxes found in lipstick include carnauba (82 C) and candelilla wax (mp 65-70 °C), beeswax (mp 63 °C), and ozokerite (mp 61 to 78 °C).

Oils are used to help spread the pigment, make the lips smooth (by acting as an emollient moisturiser) and add shine.
Castor oil and jojoba esters are common in lipsticks.

There are also waxy pastes such as polybutene in lipsticks, which are something in between waxes and oils – they aren’t completely solid at room temperature, but they’re not runny either. Instead, they’re a sticky paste. They help the lipstick film adhere to the lips. (Many sources count these as oils rather than having a separate category as well.)

Pigments are probably what you think of first when you think of makeup ingredients. These are coloured powders which are dispersed in the rest of the lipstick, and give the lipstick its colour and opacity. Not all pigments are safe to eat, which is why only a small number are allowed in lipsticks. Some lipsticks also have shimmery or mattifying ingredients which change how the lipstick looks on the lips, e.g. mica, pearl, bismuth oxychloride, polyamide powders, silica beads and titanium dioxide. Fragrance is often added to make the lipstick smell pleasant.

Antioxidants (e.g. tocopherol, beta-carotene, ascorbic acid) keep the formula stable to air and light so it doesn’t change too much in colour or texture over time. Preservatives (e.g. phenoxyethanol) make it harder for bacteria to grow on the lipstick. 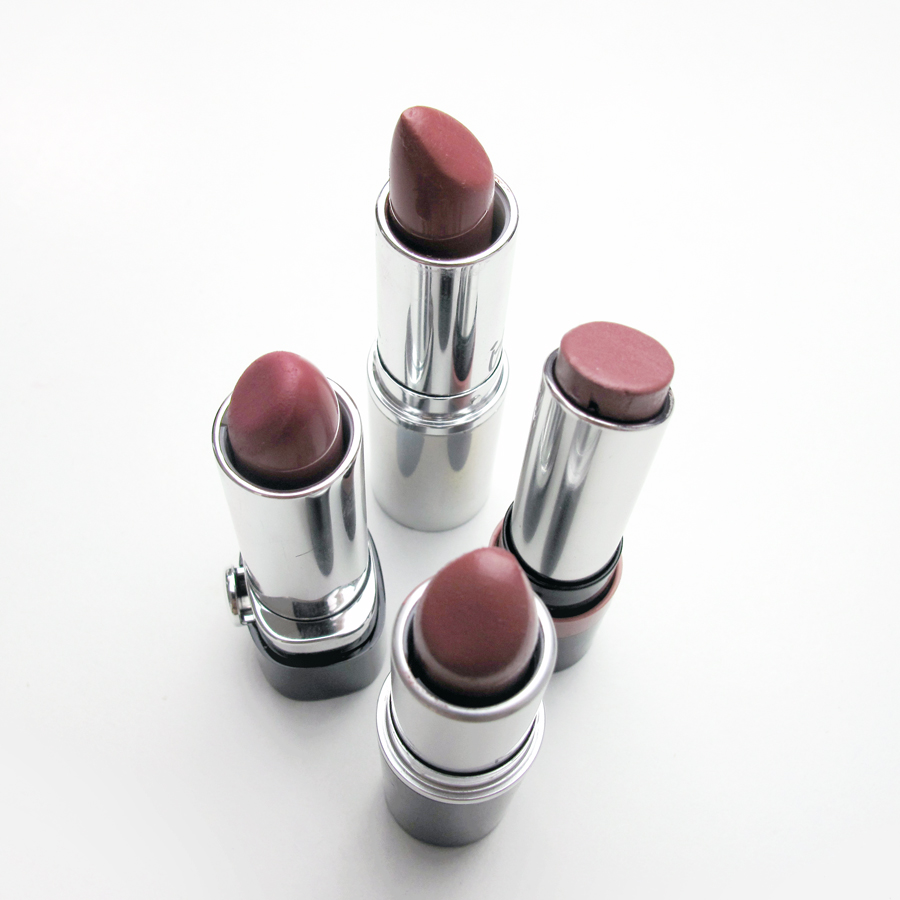 Here are ingredient analyses of some of the lipsticks I own, and how that relates to their properties. Ingredients lists are given in order from the highest proportion to the lowest, so you can eyeball which ingredients dominate. It’s worth keeping in mind, however, that the actual proportions can vary wildly – for example, an ingredients list stating “A, B” could have 51% A and 49% B; it could also have 99% A and 1% B.

I’m not a cosmetic formulator and am not familiar with all of the ingredients (and there are a lot!), so my categorisations may be a little approximate. “Waxy paste”, for example, is something in between a wax and an oil, but the boundaries are pretty fuzzy, so it’s a little arbitrary. Sometimes an ingredient falls into more than one category, so I’ve just put it into the one I think is more important.

It’s also worth noting that a lot of ingredients aren’t put into a formulation for its properties – sometimes they’re just part of a mixed ingredient that the formulator buys from a cosmetics supplier. So be careful not to read too much into the ingredients list (I’m fully aware that my classifying the ingredients, that that’s exactly what I’m doing!). It’s quite interesting to see the general trends in what the lipstick contains, and how it functions.

Revlon Lip Butters are very soft, squishy lipsticks that are extremely moisturising and slippery. You can see that hard waxes don’t appear in the ingredients list until quite far down.

MAC Twig is a satin finish lipstick. I’m guessing that’s why silica appears so high up, to provide the mattifying effect. I’ve found this to be quite drying on my lips – I think my lips just can’t handle too much castor oil.

Rimmel’s matte lipsticks use kaolin and aluminum starch octenylsuccinate to provide the matte effect. There’s some gem powders at the bottom of the list, likely for marketing purposes because they’re too far down to have much of an impact.

Burt’s Bees Lipsticks are the most moisturising “natural” lipsticks I’ve tried. I think it’s because they use a large amount of diheptyl succinate, a silicone-like oil with a smooth glide, instead of just having sticky castor oil as the main ingredient.

These lip crayons are very moisturising. They come packaged in a wind up crayon, so they’re a harder than Revlon’s Lip Butters, but they’re still quite soft – I’m guessing there’s a fair bit more ethylhexyl palmitae and mineral oil than carbauba wax in this formula.

R Mallon, N Ripamonti and N Williams O’Hanlon, Lipsticks: how they have changed and where they are going, Cosmetics and Toiletries 2014.

« Is Your Skin Dry or Dehydrated? And How to Treat It
My Picks from iHerb’s New Korean Beauty Selection »