Unless you’ve been living under a rock or just aren’t that into skincare, you’d have heard of The Ordinary by now. The newest brand from Deciem (parent company of NIOD and Hylamide) aims to bring effective skincare to the market at affordable prices.

As a skincare science nerd, it’s very exciting because many evidence-backed ingredients are very cheap, but skincare brands often price the products containing them at a premium because they work so well, and everyone else prices them high.

While some expensive brands do incorporate other technologies in their formulations that would justify the higher price, it’s really annoying as a consumer. You never know for sure how well a specific product will work for you, and no one wants to spend $70 on a product just to find out that it does nothing for your skin three months down the track. All of The Ordinary’s products are priced between $8.80 and $24.90, and you can get them online, or in-store at Myer, Priceline or the standalone Deciem stores.

The products are very plainly named according to what ingredients they contain. Interestingly, they don’t really emphasise what each product is supposed to do, so it seems like they’re targeting this line towards skincare nerds who know what they want. It makes sense,since most of the formulas contain only one or two star ingredients and are well-suited to multi-step routines, unlike the “multivitamin”-like all-in-one products aimed at a less obsessive audience who aren’t as interested in hardcore customisation. 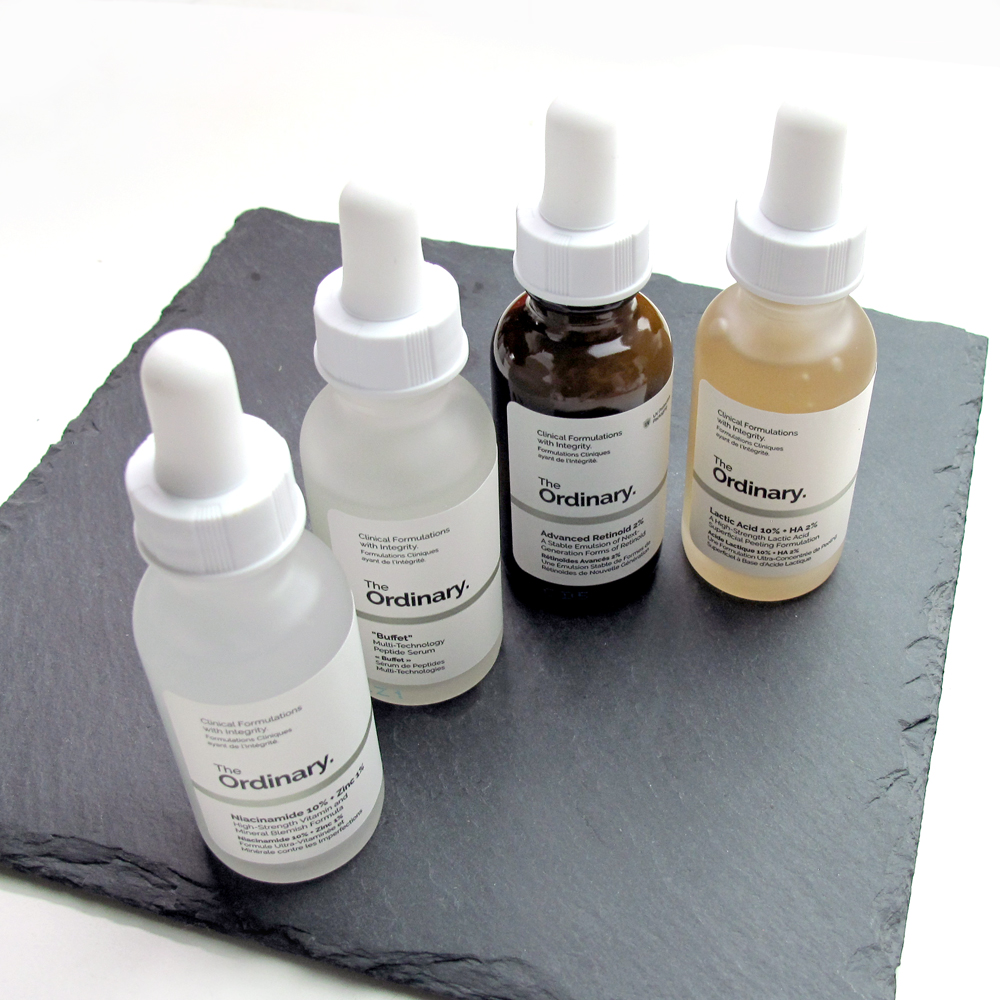 I’ve trialed 4 products so far: Lactic Acid 10% + HA 2%, Advanced Retinoid 2%, Niacinamide 10% + Zinc 1% and  “Buffet”. I’ll be talking about the first two in this post, and the second two in a post later this week. But before we delve into each individual product, here are some general remarks:

All 4 products come in 30 mL droppers, which I like because it’s easy to measure out the right amount of product, but it isn’t as convenient as a pump (dropper bottles also let in more light and air than airtight pump dispensers, but I don’t think it’s an issue with these particular products – more on that later).

One annoying thing with droppers is if the product is thick and you’re not careful when replacing the dropper, the product on the dropper scrapes off onto the neck of the bottle, and you get lots of caked up product on the threads. This luckily hasn’t a problem with these products since they’re quite runny, but I’ve experienced this a lot with liquid illuminators. The labels are no-nonsense and monochromatic chic.

There isn’t evidence that all of these ingredients are harmful (parabens are safe, as is mineral oil). Silicone is a bit annoying in routines because it can make other products roll off your face, and alcohol can be drying, so it’s convenient that these products have been formulated without them. There’s specific information on each product on the website, which is handy if you have nut allergies or if you want to stick to vegan products.

The prices I’m giving here are the Australian retail prices.

Contains lactic acid: Lactic acid is an alpha-hydroxy acid that’s fantastic for chemical exfoliation, and due to its slightly larger size, is supposed to be less irritating than glycolic acid. This is a particularly good option for people who are prone to post-inflammatory hyperpigmentation (i.e. anyone with dark skin or hair, including light-skinned Asians). In Australia (and most other places), glycolic acid products outnumber lactic acid products 20 to 1, so this is a very welcome addition to the market.

pH: Lactic Acid 10% + HA 2% has a pH of 3.60-3.80, according to The Ordinary’s website, which is low enough to be effective. The Ordinary’s site states that a higher pH would be more irritating. I’m not sure what the reasoning for this is, since lower pH is both inherently more irritating, and allows more acid to get into the skin and exfoliate…

Other notable ingredients: Tasmanian pepperberry derivative to reduce inflammation, since the acidity of lactic acid and its peeling effect can trigger sensitivity. The key active in the pepperberry is polygodial, a compound that’s been found to be anti-inflammatory in animal studies. It’s also an antioxidant. This natural extract is responsible for the peachy colour of the product.

Scent: It smells a little strange. It isn’t all that unpleasant though.

How to use: Apply a few drops to skin after cleansing, before oils and creams, day or night.

In use: I was very excited to try the Lactic Acid 10% + HA 2% because I’ve been looking for an affordable lactic acid exfoliant to recommend to other people for a while (I love Ultraceuticals Ultra Brightening Serum, but it’s pretty pricey). It gives a nice glow and smoothing effect the next day, and on the irritation front I only experienced a slight tight feeling. I managed to clog up my skin pretty good right before trialling this with an active-free week where I just used random moisturisers, but unfortunately I didn’t see any improvement in the closed comedones on my chin after using this for a week. The Ultraceuticals serum made them disappear completely, so I think my oily skin needs salicylic acid for that. This is a good product to try if you find glycolic acid too irritating, and if you’re an AHA virgin I’d recommend using the 5% version first.

Good for: reducing appearance of fine lines and wrinkles, evening out complexion, smoothing out roughness

The Ordinary say that their retinoid products are “not a treatment for acne” – it sounds like they’re trying to manage the expectations of people who don’t understand purging. But retinoids are one of the frontline treatments for acne, and the ingredients in this product have been studied in acne in a small uncontrolled clinical trial, so I’d say that this product could work for acne-prone skin.

This claim should be viewed with caution though, as it looks like it’s based on a (non-peer-reviewed) in vitro study and chemistry-based speculation (it’s a tretinoin ester rather than a retinol ester, as you can tell from the fact that “retin-” is the second part of the ingredient name). It’s also claimed to be less irritating than tretinoin, and several times more effective against signs of aging than other non-prescription retinoids.

The second retinoid ingredient is encapsulated retinol. Embedding the retinol in a capsule means the retinol is slow-release which makes it less irritating, plus the retinol is stable for longer since it’s protected from air. The product also comes in an amber bottle to protect from light degradation.

The Ordinary also have a Retinol 1% product in their range, which contains 1% retinol only.

2% strength: It’s a bit difficult to compare the strengths of skincare products containing different retinoids because they have different potencies – it’s like trying to compare codeine and heroin. Advanced Retinoid 2% is even trickier than other retinoids.

For this product, it sounds like they count the capsule as well as the solvent used to solubilise the hydroxypinacolone retinoate as part of the 2%, so it’s difficult to work out the exact percentage of the retinoids (interestingly, there’s a notice on The Ordinary’s site saying that they may be banned from shipping Retinol 1% to Europe in the future since it’s likely they’ll ban products with over 0.3% retinol soon, but there isn’t a warning on Advanced Retinoid 2% which suggests that it has less than 0.3% retinol… but it could also be that encapsulation makes ingredient accounting a bit fuzzier).

Additionally, hydroxypinacolone retinoate is a heavier molecule than retinol (about 50% heavier). There’s also the big issue of the overall formula affecting absorption, which often goes ignored when people get too into ingredient analysis. So with all this in mind, I’d give up trying to compare this to other strengths based on the 2% figure alone.

Other notable ingredients: It has the same antioxidant, anti-inflammatory Tasmanian pepperberry extract as the Lactic Acid as well as bisabolol which acts as an anti-irritant. It also has lots of humectant glycerin.

pH: The pH of this product is 5.00-6.00. The enzymes in the skin that convert retinol (and potentially hydroxypinacolone retinoate) to the active form only work at higher pH, so this product shouldn’t be used with any acidic products with lower pH for maximum effectiveness.

Sun sensitivity: Sensibly, there’s a warning for increased sun sensitivity while using the product and a recommendation for use of sun protection.

Scent: Smells a lot like other retinol products, mild

How to use: Apply a few drops to your face before oils and creams, and after water-based serums in the evening (light breaks down the retinoids).

In use: I started using Advanced Retinoid 2% expecting to get horrific peeling like I have in the past with other retinoid products, so I put it on my face and waited for the worst to happen. But much to my surprise, after three days, my skin was fine. So to really push the boundaries, I used it for 5 days in a row, then waited again… and nothing. Nada. Not even near my eyes! I’m incredibly impressed with the lack of irritation, and I love the hydration that the high glycerin content gives (it’s a bit sticky on the skin, but you’re only meant to use it at night so it isn’t a big issue).

I’ve noticed that my skin has become smoother and looks more luminous since using it, much like what I’ve seen with other retinol products in the past, but I can’t in all honesty rule out the effect of the glycerin.

(If you want more info on exfoliation, smooth skin and getting rid of hyperpigmentation with AHAs, make sure you’ve downloaded this free exfoliation guide!) 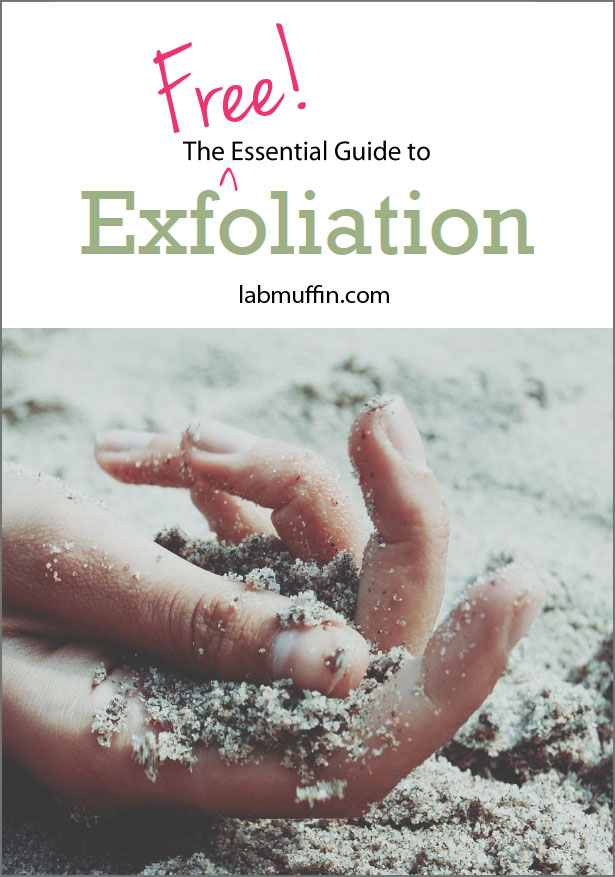