Earlier this week I posted about the different types of base ingredients in moisturisers: occlusives, emollients and humectants. I’ve dug up a few facial moisturisers I have lying around to deconstruct.

When looking at most product ingredients lists, the ingredients will be in order from the highest concentration to the lowest. Typically, when deciding if a moisturiser will suit your skin type, you don’t need to look past the first 6 ingredients or so, since they make up the majority of the product, and will be responsible for the moisturising action. It’s a different story when you’re looking at more potent ingredients that target specific concerns (e.g. anti-aging, exfoliants, antibacterials, lightening), but those tend to be useful regardless of skin type.

With this in mind, I’ll be classifying the top 6 ingredients in each of these facial moisturisers, as well as commenting on some of the notable ingredients further down in the list. If there’s no comment next to the ingredient, I’ve probably explained it in a product further up.

To recap, the main categories of moisturiser are:

Occlusives – block water from evaporating from the skin, especially good for dry and dehydrated skin
Emollients – smooth skin and help repair
Humectants – draw moisture to the skin, effective even at lower percentages.

Aqua (water) – The base for most face creams, and the definition of moisture.
Cetearyl alcohol (emollient) – A blend of cetyl and stearyl alcohols, two fatty alcohols that are nothing like drinking alcohol (that is, ethyl alcohol), but are great for smoothing skin down as well as making sure the oily and watery parts of the moisturiser don’t separate (it’s an emulsifier). It can be derived from coconut oil.
Rosa canina fruit oil (emollient) – This is the technical name for rose hip oil from a specific species of rose. It mainly contains oleic and linoleic acids, which are excellent for repairing skin, as well as antioxidants.
Safflower seed oil (emollient/occlusive) – This also contains many linoleic acids and antioxidants.
Caprylic/capric triglyceride (emollient/occlusive) – This also comes from coconut oil, and smooths skin as well as blocks evaporation.
Jojoba seed oil (emollient) – This stuff is a lot like natural sebum.

Glycerin and honey are a little further down in the list, and there’s aloe vera extract as well – these humectants together would probably add noticeable humectant action to the mix (glycerin is typically used in moisturisers at 2-7%, otherwise it feels sticky).

Overall: Lots of emollients, a small amount of occlusives and some humectants. It’s suitable for all skin due to all the skin-repairing emollients, but drier skins might need some more occlusives on top. 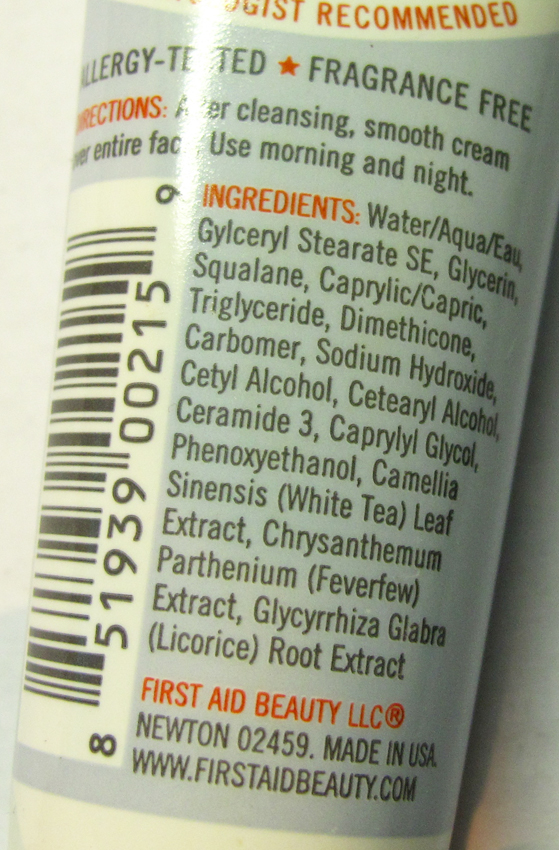 Water/Aqua/Eau
Glyceryl stearate SE (emollient/occlusive) – an emollient derived from glycerin and stearic acid.
Glycerin (humectant) – One of the most popular humectant ingredients, can be derived from any animal or vegetable fat or oil.
Squalene (occlusive/emollient) – This is usually derived from olives, and is naturally found in skin. As well as being occlusive and emollient, it also has antioxidant properties.
Caprylic/capric triglyceride (emollient/occlusive)
Dimethicone (occlusive/emollient) – This does double duty as an occlusive and emollient, and is used in many skin primers. It does seem to cause breakouts in some people though.

There’s also ceramide 3 further down in the ingredients list – it’s a very effective emollient that’s naturally found in skin, and has been used for treating eczema.

Overall: Has lots of humectant and emollient action, with a bit of occlusive action too – an all-rounder for normal-oily skin. 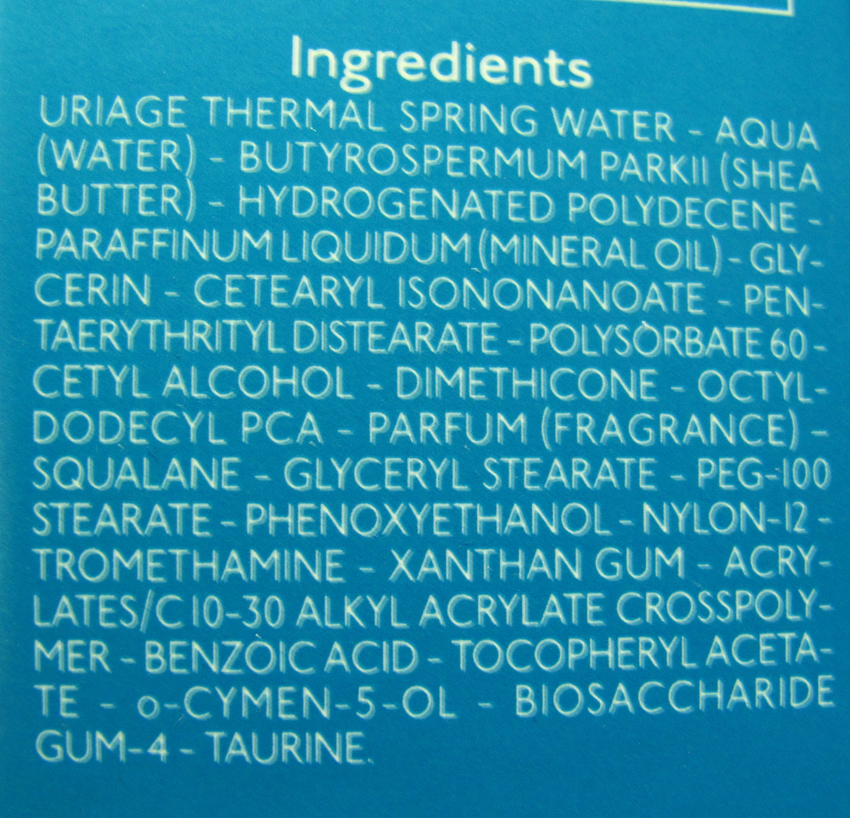 Uriage thermal spring water – Water with some salts in it. They’re supposed to be good for your skin, but I haven’t looked into it much.
Aqua (Water)
Butyrospermum parkii (shea butter) (occlusive/emollient) – Butters are more solid than oils, meaning they tend to have stronger occlusive properties. Shea butter is one of the few non-comedogenic, natural ingredients with high occlusivity.
Hydrogenated polydecene (emollient) – Nicely spreadable emollient.
Mineral oil (occlusive) – Hardcore petroleum-based occlusive, one of the best available. No it’s not comedogenic, or toxic, or suffocating (there are a lot of mineral oil myths out there) – but it can turn oily skin into a grease puddle.
Glycerin (humectant)

Overall: Lots of water, some occlusives and some emollients, plus glycerin as a humectant – this is going to be good for dehydrated skin that’s on the dry side. 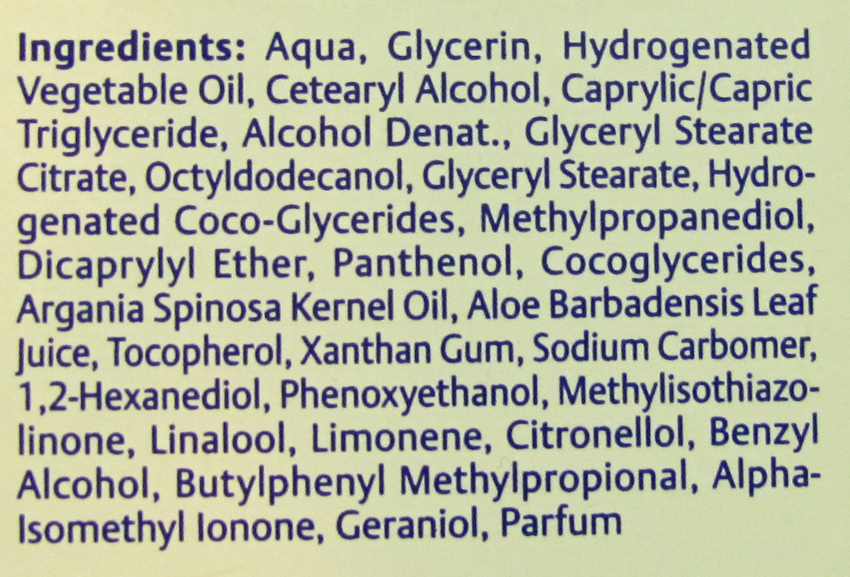 Aqua (water)
Glycerin (humectant)
Hydrogenated vegetable oil (occlusive/emollient) – This is pretty much the type of vegetable oil in margarines. It’s not great for you if you eat it, but it won’t be absorbed if you just put it on your skin.
Cetearyl alcohol (emollient)
Caprylic/capric triglyceride (emollient/occlusive)
Alcohol denat (non-moisturising) – It’s a bit strange to see ethyl alcohol this high up on a moisturiser ingredients list, but ethyl alcohol helps products feel less cloying and sticky on the skin. However, it can be drying and irritating.

Overall: This moisturiser has a humectant on the top of the list, with some occlusives and emollients beneath it. The alcohol would help the cream sink in, despite having a heavy-ish occlusive near the top of the ingredients list. This would be good for dry and dehydrated skin, but may be a tad irritating for very sensitive skin.

Water/Aqua/Eau
Isostearyl palmitate (emollient) – Emollient that spreads nicely, with a silky, light feel. Some people may be allergic or might have a breakout in response to this.
Cetyl ricinoleate (emollient) – An emollient ingredient made from castor oil. Light feeling.
Dimethicone (occlusive/emollient)
Butylene glycol (non-moisturising) – Used to help creams glide better.
Squalene (occlusive/emollient)

Overall: Lots of emollients, some occlusives – good for dry-normal skin. There aren’t any humectants so it may not be as suitable for dehydrated skin. There are some good ingredients in here, as well as some irritants, so sensitive skin may have issues.

As a comparison to all the face moisturisers I’ve gone through, here’s the ingredients list of a heavy duty body moisturiser: 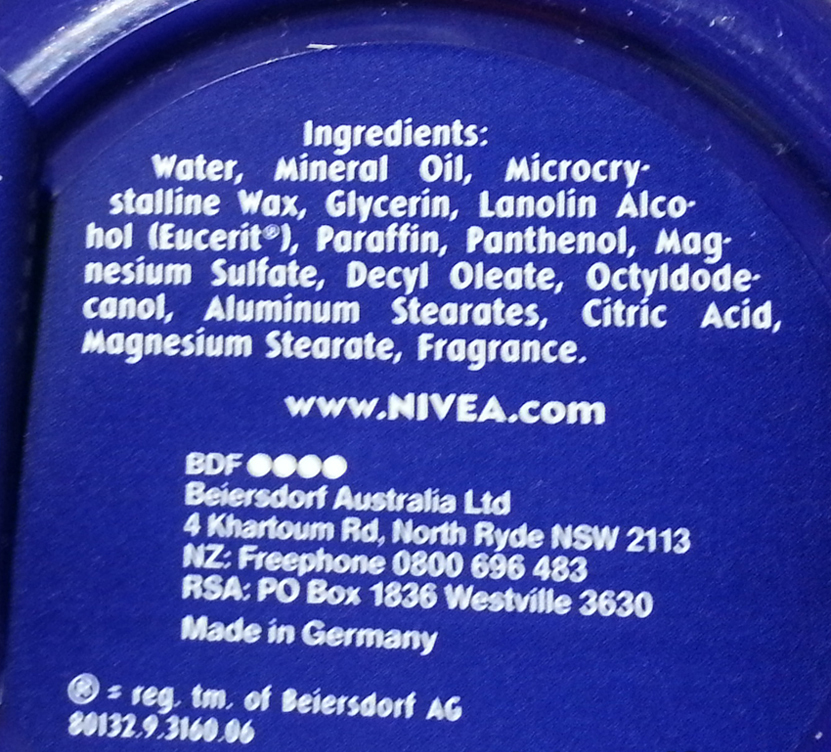 Full of occlusives – this is perfect for applying on dry winter skin right after a shower, but would be too heavy for the face, and would drag unpleasantly across delicate facial skin as you applied it (occlusives tend to be more solid). Like Vaseline though, it would make a good mask!

I hope this post gives you a better idea of how to go about reading an ingredients list to decide if the product is right for your skin type – it’s not an exact science and the best we can do is have an educated guess, since there are no percentages given for each ingredient. But it’s a lot more reliable than reading the front of the box! Don’t be afraid to Google unfamiliar ingredients, and reviews are always a good resource for checking out other people’s experiences.