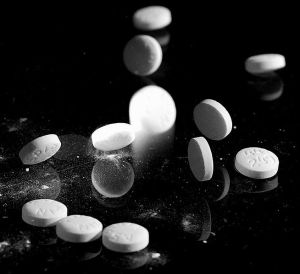 Aspirin masks are a popular DIY skincare treatment, but can some pills crushed in water be an effective homemade replacement for expensive salicylic acid exfoliants?

Aspirin is acetylsalicylic acid, which sounds a lot like salicylic acid, a beta hydroxy acid that’s great for exfoliation, with anti-irritant and anti-bacterial properties that make it great for acne-prone skin. The big difference is in the “acetyl”. This is what they look like: 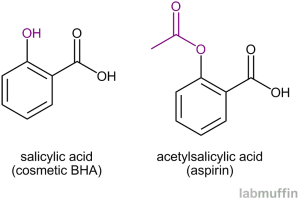 The little OH group on the phenyl ring (hexagon) on the salicylic acid has been replaced by a big thing in the aspirin. This is called an acetyl group. That OH was the “hydroxy” bit of the beta hydroxy acid – so aspirin isn’t a BHA (it’s a beta acetoxy acid).

What does this mean?

The exact mechanism of AHAs and BHAs is unclear, but since they have a very similar effect on exfoliation, the OH is probably quite important.

One common question is: Will the acetyl fall off so you end up with salicylic acid?

Unfortunately, this is unlikely. The acetyl is attached to the rest of the molecule by an ester bond. To hydrolyse an ester (i.e. break the ester bond), you need a very strong acid or base – think sulfuric acid or sodium hydroxide (lye). Even though “hydrolysis” sounds like it’ll happen if you just add water, in reality it often takes a lot more effort!

Another way of turning aspirin into salicylic acid is by using an enzyme known as an esterase. This happens when you take an aspirin tablet – esterases in your liver and digestive system metabolise the aspirin and you get salicylic acid. There are esterases in human skin; however, the extent to which aspirin is hydrolysed is unknown (probably not a significant amount, considering how much aspirin is in an average aspirin mask, the lack of carrier chemicals in the mask, and how little time it’s left on).

Not entirely! The salicylate part of the molecule (i.e. most of it, apart from the purple bit!) has an anti-inflammatory action, and can lessen inflammatory redness from pimples etc. Additionally, the gritty paste-like texture of aspirin masks mean that even if it’s not a great chemical exfoliant, it can act as a physical exfoliant – skin softness is a common immediate effect!

However, keep in mind that aspirin masks are not for everybody – some people can find them too rough and they can cause extra redness. Also, the development of Reye’s syndrome is a risk for children, so aspirin should be avoided during pregnancy – some aspirin can be absorbed through the skin, so the risk is present even if it’s not being taken orally. Of course, if you have a sensitivity to aspirin, it should go without saying that you should be cautious! 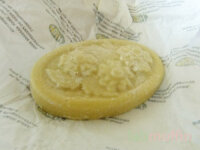 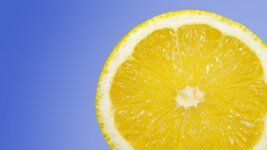 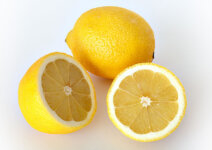 5 thoughts on “Is an aspirin mask the same as a beta hydroxy acid treatment?”