Update (2018-12-05): Since Danny of Mentality Nail Polish has generously sent me a cease and desist for defamation as seen in the comments section, I’d like to interrupt your regularly scheduled programming to clarify (even though I think it’s pretty damn clear already) that the causes of the issues are science-based opinion and speculation.

Welcome to every nail polish lover’s nightmare – nail disease. Wearers of Mentality Nail Polish have been waking up to this horror: 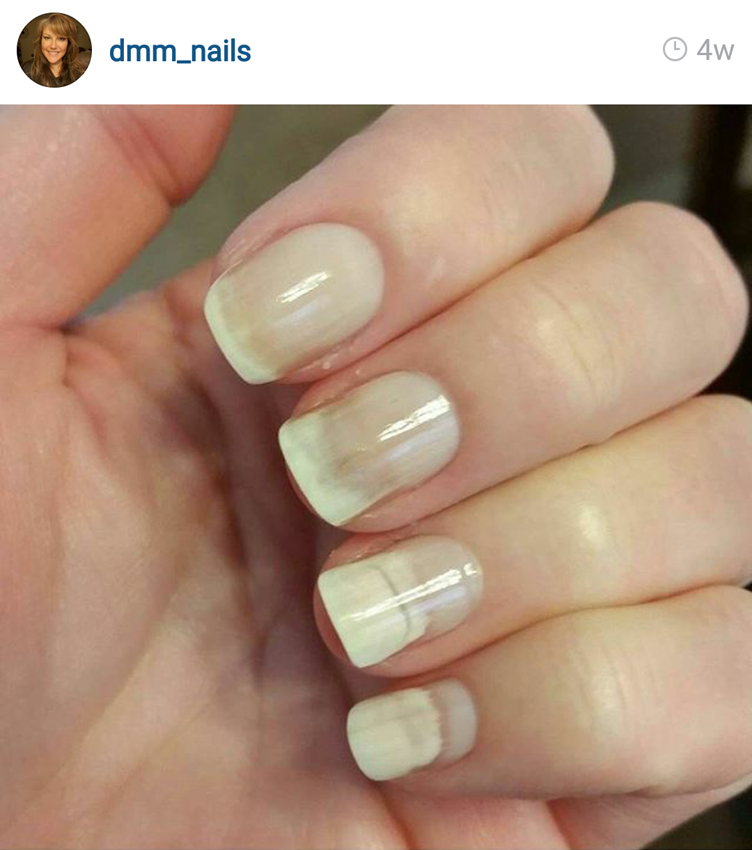 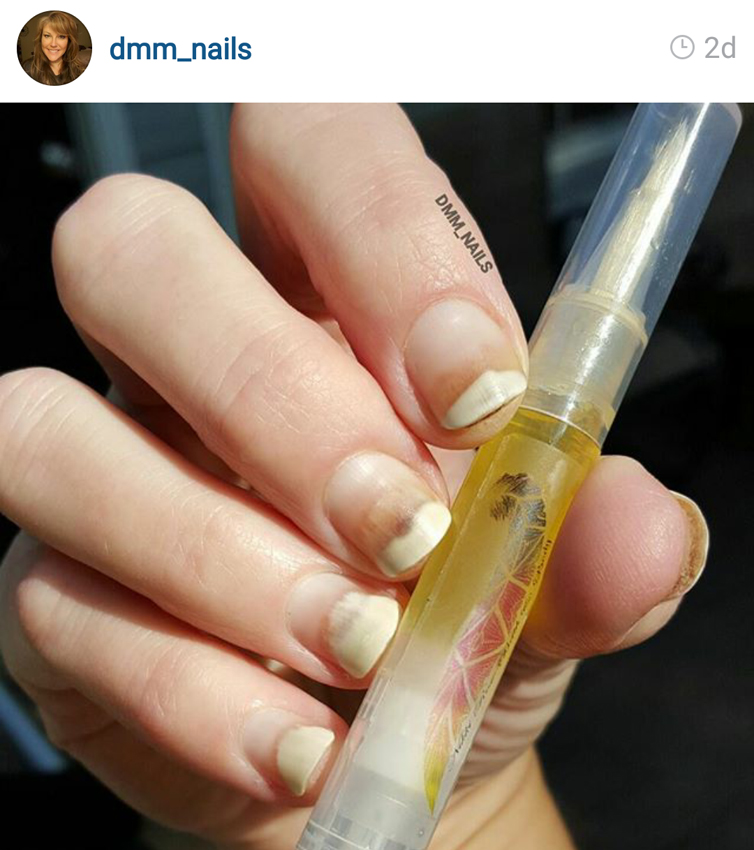 Thanks to @dmm_nails for letting me use images of her poor nails!

The technical term for this is onycholysis – when your nail detaches from the underlying nail bed. It’s painful, it’s inconvenient, it’s ugly, and you have to wait til it grows out to recover (if it ever does). There are lots of write-ups on the multitude of legal and ethical fuck-ups that Mentality Nail Polish have made in handling this issue, so I’m not going to rehash that in this post (you can read all about it at The Mercurial Magpie and Ashley Is Polish Addicted, amongst others). Like many others, I’ve been racking my brains wondering what exactly went wrong.

Of course, we won’t know for sure until someone gets analysis results back from a lab. Mentality “almost have enough funds” for an analysis now (although they’ve reportedly known about this problem since September last year, and a GCMS can ordered for under $100 and they haven’t even done that, so I’m guessing we’ll hear the results in 2020 or after an injunction?). But since they’re going full Laganja on this one, I’m not holding my breath.

In the meantime, here’s my analysis of all the speculations that have been flying around. Keep in mind that these are just speculative hypotheses and my opinions on them only – they’ll change as we get more complete information (which is pretty tricky, as Mentality have been deleting their posts, and I’m having trouble finding some of their past statements… I’m sure a lot of links I currently have here will die!). As I’ve read more, I’ve changed my mind about 7 times about what I think the most likely cause is. I’ll be updating the possible explanations as they develop.

This is the angle that Mentality have been pushing, which makes sense because it means less liability for them and hence their best chance of getting out of this without being buried in a steaming turdpile of legal troubles.

Citric acid was the first ingredient named by Mentality as a potential culprit. Current creme and holo polish (OK base):

Sourced from their ingredient info page. I’ve bolded ingredients unique to each base. Yes, citric acid is one of them. However:

2. Contamination of Arminex base in general

Mentality’s current suspect is cross-contamination with methacrylates. For more specifics scroll down to the Methacrylate Contamination section below.

For all faulty Arminex base theories:

With what we know so far, it seems much more likely that it’s something that Mentality have done that’s causing all this, given how these problems have been isolated to one company. Here are some of the suggestions:

Fungal infections are the most common causes of onycholysis, and some of the affected nails look like they have fungi spots. But:

Verdict: Highly unlikely. The fungal infections probably occurred after detachment of the nail.

This was tentatively suggested by Ray from Nail Super Store, who supplies most of Australia’s indies with base. In particular, he suspects neon pigments.

(Ray is actually responsibly removing neon pigments from his store based on this possibility. Notice how he’s not putting it on sale.)

3. Destabilised polish due to degassing etc.

Another suggestion is that the base was fine, but then decomposed due to processes performed by Mentality (e.g. degassing), forming a toxic chemical.

This is an interesting hypothesis put forward by Mike Levine, a chemist husband of a nail polish fan. The theory is that Mentality have been experimenting with making their own polish base without properly understanding the chemistry and the testing involved. It failed spectacularly, and they’re trying to pass the blame off onto Arminex.

Heavy metal contamination is a theory I’ve recently seen popping up in some discussions.

Verdict: Highly unlikely. They could be in there, but they’re not causing the problems we’re seeing.

Here’s the latest proposed suspect from Mentality: methacrylate contamination of the Arminex base.

If it’s indeed methacrylate contamination, how did it get in there? The manufacturers of Arminex also make gel formulas which use methacrylates, so cross contamination seems like it could be an explanation. Alternatively, Mentality themselves might’ve contaminated their base with methacrylates. Here are the possibilities:

a. Arminex contaminated the polish base accidentally during manufacture: Unlikely

We were unable to identify the smell of advanced plastics until we began to work with gel in bulk format. We only ever had samples and personal purchases of UV Gel for product testing in the months prior to receiving our first shipment of raw gel material this July 29th.

b. Arminex sent them the wrong base altogether: Unlikely but possible

There’s actually a way to check if there’s methacrylate in the polish – the polish can be decanted (carefully in a well-ventilated area) into two polish-proof tubs, and one can be irradiated under a UV lamp or in the sun for a few minutes. If the texture of one changes and the other doesn’t (e.g. if you poke them with a skewer), then it’s likely that it contains methacrylates and a photoinitiator. (Of course, the methacrylate could be at too low a concentration to change the polish texture significantly, or there might not be photoinitiator in there to get the reaction to start, so a negative result could still mean there’s methacrylate, but there’s a chance of a positive result which would be exciting!)

It’s unlikely that we’ll know anything for sure for at least a few weeks, but if you do own any of the offending polish – don’t risk wearing it! It can take years for your nails to recover, and the scary thing is – we don’t know what’s in the polish. There are way too many possibilities at the moment. You don’t want to have terminal cancer years down the track, just because you wanted to wear a very specific, painful, stinky polish. Keep the bottles in case they’re needed for analysis or claims later, and put on something by a quality indie brand who actually care about the health of their customers!

Arminex have issued a cease and desist, which Mentality have smugly posted on their Facebook wall, for… who knows what reason anymore (not complaining here, just bewildered and grateful for extra info!).

Update 1: The affected base is being submitted for materials identification. We believe that it has a methacrylates odor and may possibly be rendered benign by use of a UV lamp. We were unable to identify the smell of advanced plastics until we began to work with gel in bulk format. We only ever had samples and personal purchases of UV Gel for product testing in the months prior to receiving our first shipment of raw gel material this July 29th.

We believe that the images submitted to us bear a strong resemblance to UV Gel burns.

Orders are shipping. Remakes are shipping. All work is in the new bases. Thank you for your patience while we worked through this. Please stay tuned so that we can provide important information to meet further legal needs. Never quit.

Update 2: We are issuing a full recall on all Mentality Nail Polish produced in Arminex base before their lawyers force us to stop using their name in conjunction with the physical damage suffered by our clients. We are pursuing a class action lawsuit in regards to the personal injuries that many of them have received using our nail polish that was produced in that base. We have lost confidence in any polish that was produced in their base, starting from early April 2014 to the end of June 2015. The label will have citric acid as the final ingredient, or a gloss label, or a 5 free label, or all screen printed bottles. If we have yet to hear from you, please reach out to [email protected] Please be patient. There are only two of us, but we are now acquiring help.

Our lawyers are being given our entire client list. Please copy and share this image before this board is closed by their lawyers, who were the first to contact us since we lodged a complaint with our distributor regarding this matter two months ago.

We operated from multiple store fronts, some of which we do not maintain anymore. It may be impossible to reach everyone that we sold Arminex base-produced products to, but we are counting on your word of mouth. Your combined efforts have helped us turn this into an internet firestorm. We still need your help.

Finances to the company have been handed over to our accountant, who is also a registered California notary. She is issuing shipping labels for new orders and remakes. We have requested allowance for housing and food but no discretionary income. All other funds will be retained to clear refunds that are now processing.

Thank you to everyone for your patience while we worked to find solution. We never not stopped. We were always working. Often we were in tears with you. We do not know yet how we will make this happen, because about $80,000 in paint, but we will not quit fighting for our clients, even for those that lost hope along the way.

I’ve expanded more on the methacrylates theory, and added a section for heavy metals, which I’ve seen popping up in a few places.