If you’re a skincare nerd, you may know that different skincare oils have different fatty acid profiles – that is, they differ in terms of which fatty acids they contain e.g. linoleic, linolenic, oleic and lauric acid.

The fatty acids have interesting properties. For example, lauric acid is strongly antibacterial, and works better than benzoyl peroxide against Propionibacterium acnes bacteria. Oleic acid is a barrier disruptor, while linoleic acid can fade pigment. So it sounds like skincare oils could be interesting active ingredients or irritants, alongside moisturisation!

But there’s a catch: in oils, these fatty acids aren’t actually acids at all. They’ve undergone a chemical reaction to form new substances called triglycerides. These triglycerides can be broken down to form the free fatty acids again under the right conditions: during digestion, and in the process of saponification in soap-making. But does this happen on the surface of your skin?

I’ve been wondering about this for a while, and I’ve had a few chats on and off with fellow nerd Stephen of Kind of Stephen over the years but we never really came to any firm conclusions. I finally sat down recently and dug up all of the papers I could find on fatty acids and combed through them all to try to make some sense of it (there were literally about 400 papers that I sorted through, which is why I couldn’t bring myself to do it earlier… I probably didn’t need to go through so many, but I like to be extra thorough to convince myself thrice over before trying to convince anyone else!). 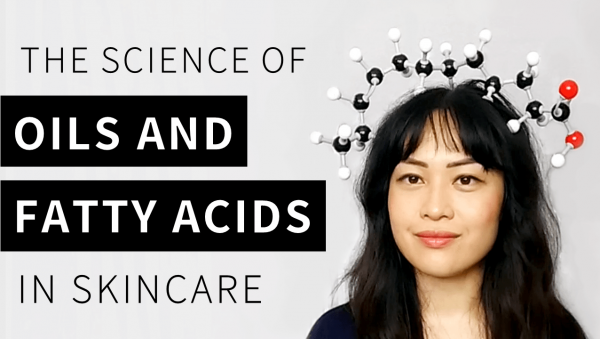 A disclaimer: I don’t recommend trying to sift through the literature to “discover” new things in research-heavy areas (e.g. acne and other skin disorders) because rest assured, researchers who know a lot more about this stuff and have a ton more training have already done this and published it in a review, and if you manage to find something new it’s probably not supported by the research. But whether skincare oils break down into free fatty acids is not the sort of topic that gets funded, so I feel safe(ish) making my own conclusion here, although I welcome review!

Related post: Are unsaturated oils bad for your skin?

Here’s the video, in which I go through the chemistry of fatty acids and triglycerides, the key studies, and explain the (sort of, kind of, tentatively convincing) conclusion I came to: triglycerides in oils are not broken down to give significant amounts of free fatty acids on the skin’s surface. In other words, we can’t rely on oils for the properties of their free fatty acids except when the FFAs are effective at very low concentrations.

Studies on Oil Hydrolysis to Free Fatty Acids on the Skin

The studies I talk about in depth in the video:

Some of the other relevant papers that I came across in my search:

Hall GS, Mackintosh CA, Hoffman PN, The dispersal of bacteria and skin scales from the body after showering and after application of a skin lotion (open access), J Hyg 1986, 97, 289–298.

Related posts: Why Linoleic Acid and Rosehip Oil Might Fix Your Skin, Review of Oils for Oil Cleansing