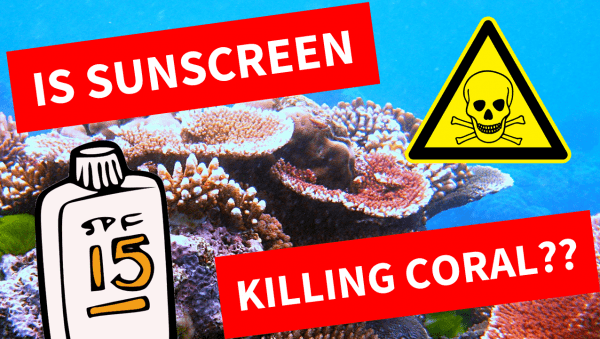 You might have seen that Hawaii has banned certain sunscreens that have been linked to coral bleaching. In particular, it’s the organic “chemical” sunscreen ingredients oxybenzone and octinoxate that have been banned. It sounds like a great victory for the environment, right?

But if you search a little past the headlines, you’ll find that there are actually a lot of coral experts and marine ecologists who aren’t happy with the decision. Why is that?

To find out, let’s look at the science behind sunscreen and its effects on coral.

Check out the video here – keep scrolling for the text version.

What Is Coral Bleaching?

The concerns about sunscreen’s effects on coral come from studies on isolated coral samples, and the main possible impact is coral bleaching.

Coral live in symbiosis with algae (zooxanthellae) that live inside them. The algae are important to the coral because they absorb sunlight and photosynthesise to create nutrients to feed the coral. The algae are also responsible for the beautiful colours in coral.

But when the coral is overly stressed, it expels the algae, leaving the coral bleached and pale, and without their main source of food (algae provide about 90% of the coral’s energy). Bleaching is sometimes reversible, and if the stress is only temporary, the algae can return to the coral. But if the stress is prolonged or too severe, then the bleaching continues and the coral will eventually starve and die.

A lot of different stresses are known to cause coral bleaching. The main ones are temperature changes in water (usually as a result of climate change), ocean acidification, increased sunlight, and pollutants (e.g. herbicides and nutrients from farming, oil spills, silt).

Some sunscreen ingredients have also been found to cause coral bleaching in studies on isolated coral samples. The most studied filter is oxybenzone. Some of the key studies are:

Is there enough sunscreen in the environment to harm coral?

The studies listed above have led to the headlines that sunscreen ingredients can cause bleaching at “extremely low concentrations”. But there are still varying degrees of “extremely low” that are relevant here:

These distinctions are important because, even though these numbers are tiny to us, they’re extremely important when working out the effects of sunscreens on coral relative to the amounts of sunscreen. The fundamental principle in toxicology is that everything can be a poison in large enough amounts, and everything is safe in low enough amounts. This is commonly summarised as “the dose makes the poison”.

In the studies, sunscreens were exposed to coral in the ppm to ppb range. And while these sound pretty low, other coral researchers have pointed out that these concentrations are much higher than those found in the vast majority of the environment.

For example, the lowest concentration of pure sunscreen filter used in the 2008 Danovaro paper that had an effect was 0.99 parts per million of 4-MBC (enzacamene), which sounds quite low – but it’s actually quite a lot.

Assuming that you applied 30 g (the recommended amount) of sunscreen containing 3% enzacamene on your entire body and it washed off completely into the water as you swam, you’d get that concentration if you swam in 909 L of water – about 3 bathtubs full.

To achieve 2.28 ppb of oxybenzone, the lowest quantity tested in the 2015 Downs study, your 30 g of 6% oxybenzone sunscreen would be diluted in 790000 L, or one third of an Olympic swimming pool.

These estimates are quite conservative, since it’s commonly found that people usually wear less than half of the recommended amount of sunscreen, and the amount that dissolves in water is far less than 100% (the 2008 Danovaro paper estimates that 25% of the sunscreen comes off in a 20 minute swim).

There are also ocean currents that carry away pollutants as they enter the water. So it shouldn’t be surprising that sunscreen is only found in almost undetectable concentrations in most of the environment (in the ppt range), or is undetectable.

But higher concentrations that realistically could affect coral have been found in some places, generally in secluded bays with hundreds of recreational swimmers in a small patch of water, like on popular beaches. For example, in Hawksnest Bay and Trunk Bay in the US Virgin Islands, concentrations of oxybenzone between 75 ppb and 1.4 ppm have been measured during busy times of the day.

It’s important to note that even though environmental concentrations are low, bioaccumulation can also occur. This is when the sunscreen ingredients build up in coral and lead to a higher concentration than in the water.

As well as the low concentrations, there’s another big question mark in the data. Unlike for other impacts on coral, there isn’t any solid evidence of sunscreens having caused harm to coral reefs.

There’s some anecdotal evidence from researchers who have seen that coral reefs in a few areas with more swimmers are more degraded than in areas with less swimmers, or with less sunscreen use – but anecdotal evidence is flawed, and there aren’t any studies with convincing evidence. This is very different from the headlines you might’ve read about how we’re all destroying coral with sunscreen!

In studies on sunscreen and coral, some researchers have tried to estimate the effects of sunscreen in the environment on coral:

A distraction from the real issues?

But a lot of researchers are of the opinion that the harm from sunscreen for the vast majority of coral reefs is actually minuscule, if you look at the bigger picture. Sunscreens don’t even rate a mention in recent textbooks and reviews on coral bleaching.

The much bigger threats to coral are climate change and agricultural management, and against these larger threats, banning sunscreens to save the reefs is a bit like rearranging deckchairs on the Titanic, or polishing a scratch on your doorknob when your house is burning down. It helps, but is it really worth doing?

These scientists are also critical about the sunscreen ban – it seems to be an easy way for politicians to show that they’re “doing something” and distract from the bigger, harder-to-fix issues of climate change and reef management.

While it may help, it’s insignificant and most likely a disingenuous (or at least misguided) way for governments to avoid dealing with issues with far great corporate interests involved. There’s limited funding for addressing environmental issues, and attention on the wrong things can distort people’s perceptions.

We seem to be losing sight of the real problems (warming / emissions), with growing focus on straws and sunscreen = displacement behaviors = pointless little things we’re doing bc we don’t wanna accept the real challenge in front of us. https://t.co/CWdxHt0zAb

If trading the fight against the many drivers of climate change for ditching your sunscreen brand sounds too good to be true, it’s because it is. Important op-ed in @projo by @URI_fisheries PI @ATHumphries and post-doc @kdgorospe. https://t.co/XIphFhdm5b

Another tokenistic aside to lull is into a collective delusion of #OceanOptimism and distract us from the real challenge of mitigating climate change, addressing which unsettles corporate mentality and related political camps as threatens ‘business as usual’

What Can You Do?

Sunscreen has pretty negligible effect, except perhaps if you’re planning to swim in an area close to coral. In those situations, you should try to maximise your use of other types of sun protection (shade, sun-protective clothing) so you can minimise your use of sunscreen. For the exposed areas, look for sunscreens that don’t contain ingredients that have been found to be harmful to coral, or contain lower amounts.

Note on zinc oxide: Zinc oxide is toxic at around the same concentrations as the organic sunscreens (except oxybenzone), but it’s typically used at much higher levels in sunscreens (up to ~25% zinc oxide vs. below 10%/closer to 5% for organic filters). And although only zinc oxide nanoparticles were tested in the published studies (the particle size used in the Fel study is unknown), it’s possible that “non-nano” micronised zinc oxide will have this effect too (depending on how the zinc comes into contact with the coral) – one paper suggests that it’s to do with dissolved zinc ions, and both micro- and nano-zinc oxide release similar amounts of zinc ions.

Biodegradable also doesn’t mean reef-safe – both zinc oxide and titanium dioxide are non-biodegradable (again, they are often mistakenly labelled as “biodegradable” even though they don’t break down), but one is harmful while the other is relatively safe.

To minimise the amount of sunscreen that washes off your skin, choose sunscreens with high water resistance and apply them 20 minutes before you enter the water. 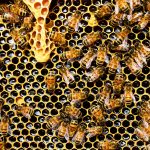 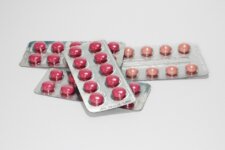 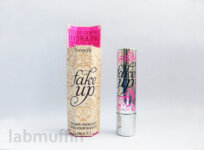 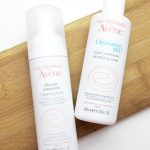 12 thoughts on “Is Your Sunscreen Killing Coral Reefs? The Science (with Video)”