Putting the dropper on your face

I see this a lot on social media. I guess it looks kind of cool, but droppers aren’t meant to be used that way. 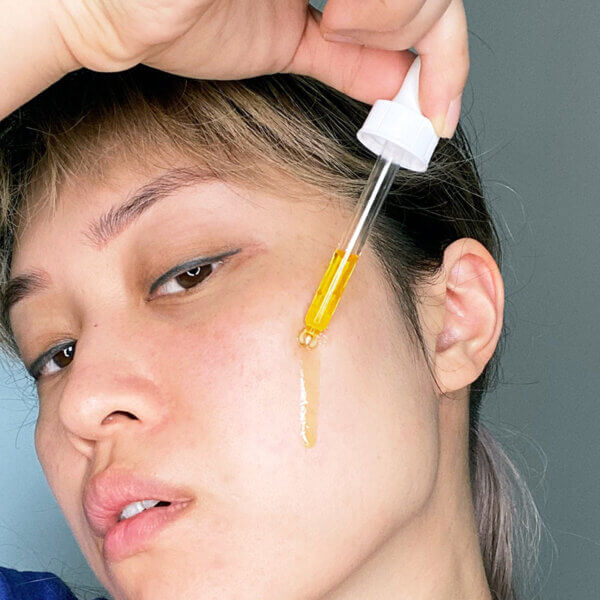 You can also see how my tattooed eyeliner’s going after 3 years!

Jar products are considered the riskiest form of packaging, and are usually designed to ensure that repeated dipping into the product won’t lead to contamination with too many microbes (fungi, bacteria). Using a contaminated product can lead to nasty infections!

Preservatives are put into the product to stop microbes from growing. The way that a product is tested is by mixing the product (usually with different amounts of preservative) with fungi or bacteria, then waiting to see how much grows. A good preservative system will actually decrease the amount of fungi and bacteria – it’ll actually kill anything that’s been added.

With challenge testing, the fungi or bacteria actually gets reintroduced. Partway through the testing, some more microbes are thrown in, to simulate what would happen if you re-contaminate the product with normal use, such as dipping into a jar with a dirty finger.

In general, the amount of preservative added to products will be on the lower end of what’s needed to pass challenge testing. In general, products try to minimise the amount of preservatives used, since preservatives are relatively common allergens and irritants, and problems usually occur if you have too much. But with products where there’s a higher risk of contamination (e.g. jar products), higher concentrations might be used than strictly required, to take into account the extra contamination.

Additionally, there are sometimes different pass levels for challenge testing – in general, only products that pass at the highest level will end up in jars, whereas droppers are considered lower risk.

There are other aspects to products that can make them higher or lower risk, such as the types of ingredients used (whether they’re microbe-friendly). Again, only the lowest risk products are used for jars, and this may not be the case for droppers.

So if you’re touching the dropper to your face and then put it back into the bottle (where it puts the microbes right into the middle of the product), you’re making the preservative system do something that it wasn’t meant to do. It’s not in its job description.

Saving up serum from sheet masks

This is a similar issue. Again, you’re making the preservative system do a job that it wasn’t meant to do.

Single-use foil sachets are considered one of the safest types of packaging. You’re only meant to use them once, so there’s no expected shelf life after you open it. There isn’t even air going into it, like there is with a tube, where a little bit of air gets sucked back in each time you use it.

The preservative systems for sachets tend to be the weakest, so if you’re saving up the extra sauce and keeping it for a week or so, then again, you’re making it do a job that it wasn’t meant to do.

It’s possible that the preservative system can handle this, but the product was only ever intended to be used for a few hours after opening, not a few days, or a week, or a month after you’ve opened up the sachet to the air.

There are lots of microbes in air, and cosmetics are really good food for microbes. They’re watery, and there’s lots of nutrients (ingredients) for them to grow. Sheet masks are usually at a nice skin-friendly pH, which also happens to be microbe-friendly. You’re also probably keeping it at room temperature, which is usually warm enough for these microbes to reproduce really quickly. Again, you’re risking contamination before you apply it to your face.

Getting moisture into your products

Again, with the bacteria talk: water is really good for microbial growth.

Cosmetic products generally need to have added preservatives if they contain water, and you want them to last for longer than about a week. Extra water going into a product can lead to trouble.

The worst situation is a product with a big opening (like a hair mask in a jar) that you take into the shower, and water literally drips into it. The extra water sits on top, and isn’t preserved. It’s going to be a really good place for microbes to start growing.

Even if you use a product in a damp bathroom after you shower, there might be enough moisture to cause problems. For example, if condensation happens inside the container, like on the walls of a jar, that can make a nice habitat for bacteria and fungi.

If you want to avoid this:

Transferring your products into a different container

I’ve been guilty of this one in the past! It can be OK, but you have to be really careful.

Firstly, the container has to be very clean. The preservative system in the product might not be designed to deal with whatever dust or bits of packaging or old product or whatever’s inside the container.

Some containers are also incompatible with certain products. Glass is generally OK, but plastics can react with preservatives, active ingredients or solvents in the product. For example, sunscreen ingredients can soak into plastics, which means you have a lower concentration in your sunscreen. They can also dissolve the container.

If you have a really clean container, and you’re only putting the product in there for a very short amount of time, or if you know that that container was designed for that purpose, then it can be OK.

You can also test the container with the product (smear it on and monitor for visible changes), but sometimes the changes aren’t that obvious. So keep that in mind when you’re using a transferred product.

I see “a little goes a long way” all the time in sunscreen reviews.

Sunscreen is like paint. You’re trying to hide your skin from the sun.

Sunscreen is tested at 2 milligrams per square centimetre, so that’s how much you need to get the SPF labelled on the bottle. You can apply less sunscreen, but the SPF will generally go down linearly.

Related post: How SPF Changes With How Much Sunscreen You Use

Your skin isn’t flat – it’s microscopically bumpy. There are lots of hills and valleys. When you apply the sunscreen you fill in the valleys first, and if you don’t have enough sunscreen, then you might not be covering the tops of the hills of your skin enough. (I think a lot of people do run into this issue, because there are studies showing that most people apply less than half the required amount.)

The amount that you need to apply does depend on how big your face is, but a general rule that covers pretty much everyone is a quarter teaspoon for your face (not including your ears or neck).

Related post: How Much Sunscreen Do You Need For Your Face?

Mixing sunscreen with other products

It’s really tempting to mix a sunscreen with other products before you put it on.

The problem is, when you mix the sunscreen with something else, it can interfere with the film formation.

When a sunscreen’s SPF is tested, it’s tested on its own on bare skin. And it’s really important that it forms a continuous film, so that the sunscreen can be spread out evenly to give even protection.

If you add other stuff in there, it can mess up the microscopic structure of the sunscreen. Sunscreens are emulsions. They’re a bit like mayonnaise – if you add too much oil or vinegar or lecithin or whatever, you can actually break that emulsion, and the mayonnaise will separate.

It’s similar with sunscreens – if it separates, then you’re not getting that even layer.

So you shouldn’t be mixing sunscreens with, well, anything: foundations, pigment drops, oils.

If you want other products on your face as well, then apply it in layers. In general, it’s a good idea to wait 5-10 minutes after you’ve put on your sunscreen to put on additional layers like foundation.

Leaving sunscreen in the heat

With sunscreens, it’s important to have the filters distributed evenly through the whole product. It’s a bit like paint – the pigment needs to be evenly distributed. If it’s settled out, you’re not going to get even coverage.

It’s the same idea with sunscreens. Sunscreen should be formulated so that the filters are spread evenly in the product throughout the whole shelf life, but it does depend on storage.

Heat is something that’s good at making sunscreens separate. This can happen if you go to the beach and you keep the bottle in the sun, or if you keep your sunscreen in the car and leave it parked in the sun.

I know it seems like a good idea to leave a bottle of sunscreen in the car so you don’t forget it, but because of the heat, this is usually not a great idea. A better idea would be to keep your sunscreen in your handbag, where it tends to have cooler temperatures.

If you’re going to the beach, cover up your sunscreen with something that reflects light (like a white towel). Even better, keep it in a cooler bag.

Also pay attention to the expiry date – if you’re not very good at keeping your sunscreen out of the heat, make sure you buy a new one every summer.

Dermarolling over the wrong products

With a dermaroller, you’re using microneedles to open up channels in your skin that let skincare products go deeper. If they’re not meant to go deeper then, this can be bad. Some dermarollers have shorter needles that don’t go as deep into skin, and tend to be a bit safer.

But most products are designed to sit on the surface of your skin. Your skin is a good barrier, so a lot of the time products will have a higher concentration of actives, so that the amount that gets into the skin is still effective. You can think of it like a slow release system.

But if you’ve got these extra channels in your skin from needling, they act as a shortcut, so the ingredients suddenly all get released at once. It’s a bit like an icy drink. If you drink it slowly it’s really nice, but if you drink it too fast you get brain freeze.

Or it’s like pepper: if it’s evenly distributed in your food and you’re eating it slowly, you’re getting a little bit at once and it’s tasty. But if you eat a giant lump all at once, it’s not great.

(I am really into analogies today.)

The skin equivalent of this is irritation.

So these are some of the mistakes I’ve been seeing around. Have you done any of these? I’ve definitely done a few! Are there any mistakes that i’ve missed?