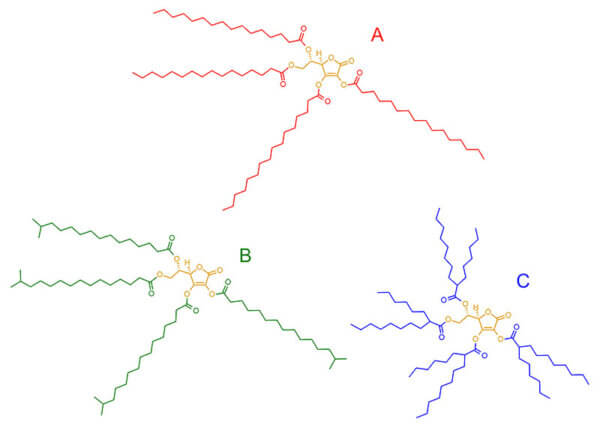 Vitamin C is an amazing skincare active, but ascorbic acid can be annoying in products. That’s why vitamin C derivatives were developed – these are slightly altered versions of ascorbic acid that can get around these issues (irritation, instability, stained fingers, fake tan smell).

Two of the INCI names for derivatives that you might’ve seen on ingredient lists are ascorbyl tetraisopalmitate (often called ATIP or VC-IP) and tetrahexyldecyl ascorbate (THDA or THDC). After a lot of digging, I’m pretty sure they’re the same molecule – or at least, the vast majority of ingredients called ATIP and THDA used in cosmetics are the same molecule.

There are three possible candidates here, which I’m going to call A, B and C:

Because the three different fatty acids are isomers each containing 16 carbon atoms, the three final structures are also isomers. This means they have the same molecular weight. They’d also be expected to have pretty similar properties, although you’d expect A and B to have slightly higher melting points than C due to the shape of the fatty acid chains.

Which is ascorbyl tetraisopalmitate?

Ascorbyl tetraisopalmitate was the first version developed and mainly marketed by the Japanese company Nikkol Group.

Because this whole thing wasn’t confusing enough, the original 1993 patent from Nikkol is in Japanese, including the chemical names. It mentions isopalmitic acid and tetraisopalmitate, which would seem to indicate Structure B.

But “iso” seems to be used in Japanese as shorthand for “isomer of”, such as in this unrelated patent – which opens it back up to structure B or C.

But a 2009 paper with an author from Nikkol calls VC-IP “2,3,5,6-O-tetra-2′-hexyldecanoyl-L-ascorbic acid” (very clearly Structure C), as well as “vitamin C-isopalmityl tetraester” (which is Structure B if you take the strict meaning of “isopalmityl”, but could also be C if you assume “iso” just means isomer).

They’ve included a diagram of the structure, which is Structure C:

They describe the synthesis using 2-hexyldecanoyl chloride, but the spectral data (1H and 13C NMR, IR) match the 1993 patent, indicating that they’re the same molecule.

So it seems pretty settled that VC-IP, as supplied by Nikkol, is Structure C.

Which is tetrahexyldecyl ascorbate?

The name tetrahexyldecyl ascorbate seems to have been popularised by a company called Barnet Products, who are currently listed as one of Nikkol’s US distributors. They sell THDA under the trade name BV-OSC, and their dossier shows Structure C and a scheme for its production from “isopalmitic acid”. Structure C also makes sense, given the naming conventions for organic molecules (“hexyldecyl” would indicate that’s made from hexyldecanoic acid).

There’s been a general vibe that THDA is considered the cheap knockoff of ATIP, but it seems like they’ve been the same molecule all along, and possibly even manufactured by the same company, Nikkol!

Just to really, really confuse things even more, in January 2022 the ingredient supplier Sytheon released a statement saying that tetrahexyldecyl ascorbate (which they sell as VitaSynol C) and ascorbyl tetraisopalmitate were different substances, with different chemical catalogue (CAS) numbers. They clarified that the name THDA would match Structure C while ATIP would match Structure B.

This clarification was done in collaboration with the Personal Care Product Council (PCPC) and the Chemical Abstract Services (CAS # provider), who are pretty big organisations in the cosmetic chemistry/chemistry world.

But it’s also pretty clear from the papers and patents discussed above that the ingredient sold as ATIP has also been Structure C all along – it seems to just have been a translation issue. That means Structures A and B don’t seen to have ever been sold or used in cosmetics, and everything seems to just be Structure C.

Which name is correct?

Neither name is really that accurate – I think the most accurate, reasonably catchy name would be ascorbyl tetrahexyldecanoate.

But ascorbyl tetrahexyldecanoate isn’t listed as an official INCI name while the other two names are, so… bad luck, me.

Hopefully this has made things a bit clearer for those of you who were also agonising over this (possibly a whole three people!).

(Thanks to Stephen for being my sounding board on this topic!) 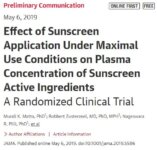 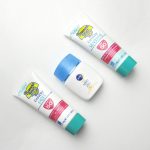 12 thoughts on “Vitamin C Esters: Are ATIP and THDA the Same Thing?”