Skincare fridges are taking off, and the question is – what’s the point of refrigerating your beauty products? Why does cold make them last longer? What about freezing your skincare products – is it OK? The short answer is yes, most of the time. Here’s the longer explanation… (also in video form here!) 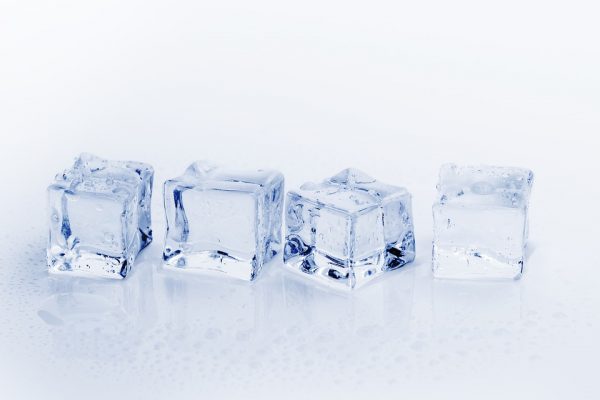 1 Why do beauty products go off?
2 What about freezing?
3 Products you really shouldn’t freeze
4 What about enzymes?
5 In summary

Why do beauty products go off?

If you own skincare and makeup products (I assume you all do), you’ll probably have seen a product go off – it might change colour, smell funny, change texture, or grow mould (ew). It might go unnoticed until you put it on your skin and you discover that it suddenly starts breaking you out.

And then there are some products that never seem to go off, like clay powder for mixing masks, or petroleum jelly.

So what’s actually happening when a product goes off?

While it might like your product is just sitting there doing nothing, it’s actually really busy at a microscopic level. At any temperature above absolute zero (0 K), which is -273 °C (or -460 °F if you live in a country that hates things that make sense), everything is vibrating with energy.

Heat is a form of energy as well. When you heat something up, all these vibrations intensify.

In your beauty product, you don’t want reactions to happen. If you have a product with ascorbic acid or vitamin C in it, you (presumably) want it to be vitamin C when you put it on your face.

If you heat up the molecules, they’re vibrating more and moving faster, which means they hit each other harder and more reactions happen faster. On the flip side, we can make the molecules move slower and react slower by cooling them down – which is where your fridge comes in.

(There are a few reactions that don’t involve collisions, but it works almost the same way. Decomposition reactions, where a molecule falls apart, speed up at higher temperatures – if you have a Lego statue and you shake it harder, it’ll break faster.)

With bacteria and mould, it can be a bit more complex as well. Most organisms have a temperature range where they function and multiply most effectively, and by cooling the product and the microorganisms inside it down, you can get it outside its best range. This is especially effective for “fresh” beauty products that don’t contain preservatives.

One way that products can go off without chemical reactions is when the texture changes.

Most beauty products are emulsions which consist of droplets of one thing sitting in another substance (e.g. droplets of oil sitting in water). Oil and water don’t like each other, so there are usually emulsifiers in the product to help the droplets stay in place.

But even with the surfactant, the oil and water would much rather be apart, so they’ll eventually separate. At a higher temperature, there’s more heat, everything moves around more, so the molecules will have more energy to break free of the emulsion structure, and the whole shebang ends up separating faster.

So if putting your products in the fridge make them go off slower, why not put them in the freezer? Well, a lot of the time, freezing products will actually be better for these reactions. But here’s the catch…

Freezers are cold enough to freeze water, and beauty products contain a lot of water. Freezing has two effects:

Water expands when it freezes, especially when you cool it down relatively slowly in a standard freezer. If you have a product that contains whole plant cells, the water will Hulk out and burst the cells, giving you a mushy texture. This happens with things like fresh face masks, and lots of fruit and vegetables.

Water molecules also like to come together or coalesce when they freeze. This means that a lot of the time, when you freeze a product and then defrost it, where the water is located will change.

This is particularly problematic for emulsions. Water freezes from one side of the product to the other. The expanding ice squeezes the oil droplets together, making the emulsion separate, so when you defrost it it won’t have the same texture.

You might have experienced a similar separation if you’ve ever drunken a frozen bottle of drink before it defrosted completely. It starts off super sweet as all the flavour and sugar was squeezed together out of the water, and at the end you’re left with a bland block of ice.

Freezing a product and making the water coalesce can also mess up the preservative system. If the product was formulated properly in the first place, there would be effective levels of preservatives throughout the product. But if the water is moving around, you can end up with pockets of product that are underpreserved and other areas that are overpreserved. The underpreserved areas will grow bacteria far more easily, and since it’s impossible to open a jar without letting bacteria in, that’s bad news for you product’s longevity.

(If you can freeze the product fast enough, expansion and coalescence aren’t an issue because the droplets don’t have time to come together and the ice doesn’t have time to expand as much. That’s why frozen food from the supermarket usually defrosts with a nicer texture than stuff you freeze yourself, and why liquid nitrogen ice cream is so smooth. But this isn’t really possible in your home fridge.)

(There’s also a cool video here from research published in a recent Science paper here that used confocal microscopy to see droplets squeezing together when an emulsion gets frozen slowly.)

If you don’t mind the texture change and you just care about keeping the active ingredient molecules intact, and you just defrost enough to use quickly before bacteria and mould can grow, then freezing your products is fine.

For example, Lush Angels on Bare Skin scrub is solid and lasts a few months at room temperature before freezing; after freezing and thawing, it’s much runnier and only lasts a couple of weeks before going mouldy. But since it takes me a year to finish a tub, freezing it in teaspoon sized lumps and thawing a little at a time is the best solution for me!

On the other hand, if there’s a product where texture is really important, then you probably don’t want to freeze it. For example, the microscopic structure of the emulsion is crucial to how well a sunscreen works. Freezing it is going to mess up the structure, and change the concentration of the sunscreen ingredients in different parts of the sunscreen. Foundation is another example where the texture is super important to how well it applies on your skin, so you probably don’t want to freeze it.

Some products contain proteins called enzymes, and in some cases enzymes can be denatured and become inactive if frozen. However, the ones most commonly found in skin products – bromelain (pineapple), papain (papaya), actinidain (kiwifruit), fig (ficin) – aren’t significantly affected.

E Jacobsen. Soup or salad? Investigating the action of enzymes in fruit on gelatin. Journal of Chemical Education 1999, 76, 624. 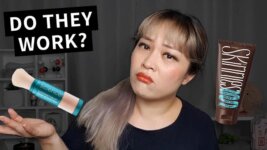 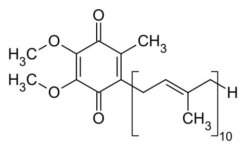 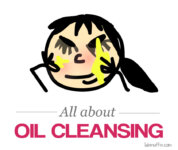 28 thoughts on “Can you freeze your beauty products?”