You may have heard that Essence’s new Peel-Off Base Coat is awesome for hard-to-remove need-to-break-out-the-foil polishes – it takes 10 minutes to dry, but that’s nothing compared to the pain and dry wrinkly fingers of glitter removal. For those of you who don’t have access to Essence, or simply can’t find it yet despite going to Target 3 times in the past week (i.e. me), there is a solution!

A lot of reviews of the Peel Off Base Coat have noted that it’s stringy and white, like PVA glue. And for good reason… check out the ingredients:

Polyvinyl acetate emulsion – PVA is an adhesive polymer which is usually used as an emulsion in water.

Water – you know what that is!

Ethylhexylglycerin and phenoxyethanol – these two ingredients are often used together as a preservative system for preventing bacteria and mould from growing in water-based cosmetics. They’re typically used at a concentration of under 1%.

So the composition is almost identical to PVA glue (which is a PVA emulsion in water), with the addition of preservatives!

Alanna from Pretty Purple Polish has tested using PVA glue out here with a handy set of step-by-step images – I also tested some “white craft glue” out under some glitter. Instead of waiting to peel it off at home like a normal person, I peeled it off with my fingers on the train. Here’s the result: 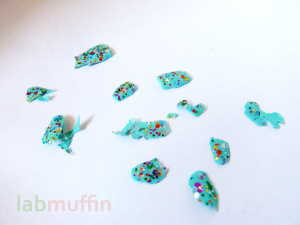 It peels off incredibly easily, in big flakes. Unlike with a normal basecoat, my nails didn’t feel dry or rough afterwards – it just separates smoothly with not much force at all.

A few things to note

– To thin out Essence Peel Off Base Coat or your DIY PVA base, don’t use nail polish thinner. As well as being expensive, most polish thinners are made of solvents that aren’t compatible with water emulsions and it’ll probably separate. The best thinner for PVA? Water! (And if you want to experiment, a tiny bit of dishwashing liquid is often used to thin PVA for spray guns.)

– Let the PVA dry (i.e. go clear) before you put polish on top – it shrinks significantly as the water evaporates. You don’t want a manicure made of lumpy.

– Be careful not to get it on your skin as well as the nail – a little stray tab of PVA on your skin can be a “handle” for the rest of the polish to peel. And it will peel off in one massive sheet.

– Clean-up with acetone won’t work well, especially if the glue is dry. Pulling at it will make the polish lift off. So far the best thing I’ve found for getting rid of stray dry bits is manicure scissors.

Overall, I think this is a genius idea, and frankly I’m surprised it took this long! I take my hat off to whoever saw how easily PVA glue peels off skin and went “Hmmm….”. And you bet I’ll continue stalking ALL OF THE TARGETS until I get my hands on the real thing. 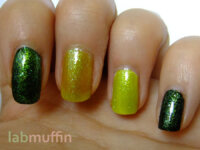 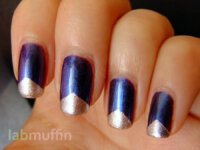 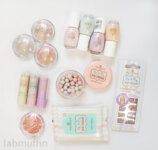