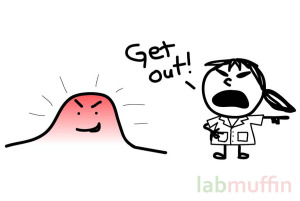 What’s the fastest way to get rid of a huge pimple?

A cortisone injection from a dermatologist. This will even get rid of those massive hard lumps under the skin that usually take forever to go away on their own! Most pimples after treatment will flatten out in 1-3 days. As handy as it is, it’s not recommended that this be done regularly (it can wreak havoc on your hormones) – save it for night-before-the-prom type emergencies. The price varies but it’ll set you back $50-100 per jab.

Acne forms when pores become blocked with sebum and dead cells, and often these blockages are invaded by bacteria called Propionibacterium acnes, which leads to inflammation (redness and pus). This usually happens due to hormones called androgens (such as testosterone) which cause the skin to product more sebum – these hormones increase drastically during puberty. Additionally, genetics, diet, smoking, stress, environment, medication, hormonal fluctuations (e.g. menstrual cycle or disorders) and pregnancy can also play a role for particular individuals.

Overall – benzoyl peroxide. Firstly, it doesn’t encourage antibiotic resistance, which is when the antibiotics kill all the weak bacteria, leaving the strong bacteria to multiply and make strong bacteria babies, and the antibiotics won’t work anymore. Bacteria don’t ever become immune to BP. Secondly, BP doesn’t just kill bacteria – it also helps reduce sebum production and encourages shedding of skin. BP is more commonly used with mild to moderate acne, and is available over the counter, whereas you need a prescription for the antibiotics in most countries. However, combining antibiotics and BP avoids the problem of antibiotic resistance and can be more effective – ask your doctor if you’re not sure what’s right for you.

The results are mixed as to what effect UV light has, but it doesn’t work as well as topical creams, plus topical creams aren’t going to give you cancer or age your skin like UV light will!

JJ Leyden. A review of the use of combination therapies for the treatment of acne vulgaris. J Am Acad Dermatol 2003, 49, S200. 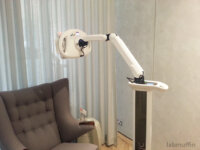 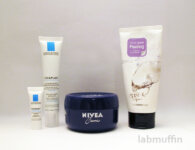 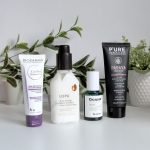 15 thoughts on “Answers to some questions from readers about pimples”