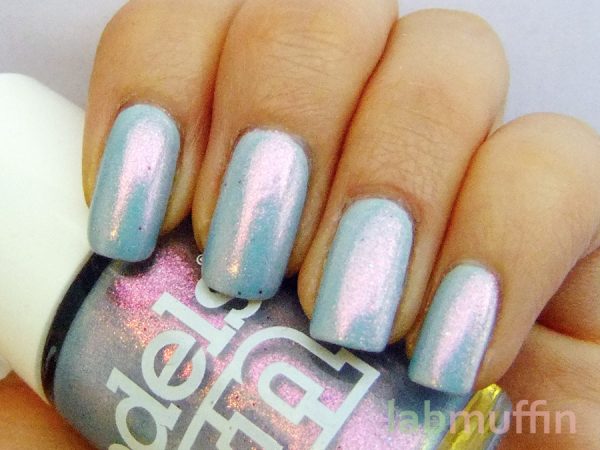 I’ve been on a Low Buy July – I was going to do a No Buy July, but failed spectacularly when I bumped into Revlon Grape Fizz on sale at Myer on July 1st. Glass flecked grape scented nails? Sign me up please!

Other than that, I’ve been doing quite well. So far I’ve only bought 6 bottles of polish… but the amount of polish I’ve received in the mail has been STAGGERING. I don’t think I’ve ever received so much stuff before. The most awesome nail mail (so far… *crosses fingers*) was a swap package from my fellow Polish or Perisher ilexica, who sent me a pack of nommy sweets and even nommier English polishes!

I’ve been lemming Models Own Indian Ocean for a while (you know, like every other polish nerd on the planet), and happily it was one of the polishes ilexica picked! *squee* It’s a pink-gold duochrome shimmer in a blue jelly base. Here it is, 2 coats over ulta3 Spring Shower: 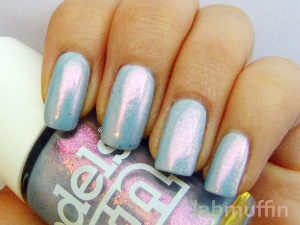 A day later, I got bored and stamped over them with Mash 39 in ulta3 Gold Rush Fever, then added Rimmel Lycra Pro Mattifying Topcoat. The effect was so ethereally pretty! 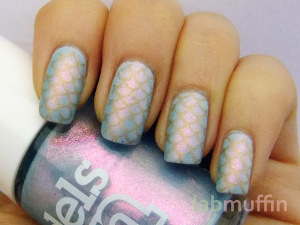 Annoyingly, my bottle has a smattering of blue and pink glitter in it. Just enough for there to be one or two glitter bits on each nail (you can see them on my middle finger), so I assume they’re not meant to be in there – probably too little to be noticed by anyone but me. Kind of like someone in the shop was playing around with it, and put the wrong brush back in, or perhaps it’s a manufacturing error. I got lazy and gave up trying to get rid of them from my nails since I did them late at night, but next time I’ll make an effort. 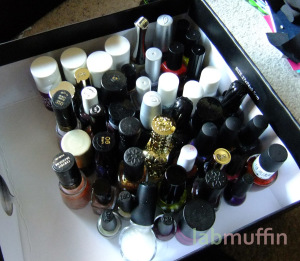 Bonus game: See if you can spot the 7 UK polishes ilexica sent me!
Super bonus polishnerd award: See how many brands you can name, just from the bottle caps… 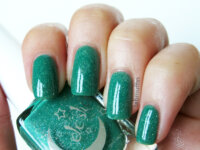 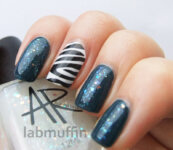 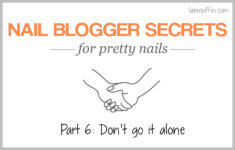 26 thoughts on “NOTD: Models Own Indian Ocean, plus stamping and matte”