Part 4 of the Nail Blogger Secrets series looks at the most enticing, yet most frustrating of polish genres: glitter. How do you get it, how do you use it, and how do you get rid of it? 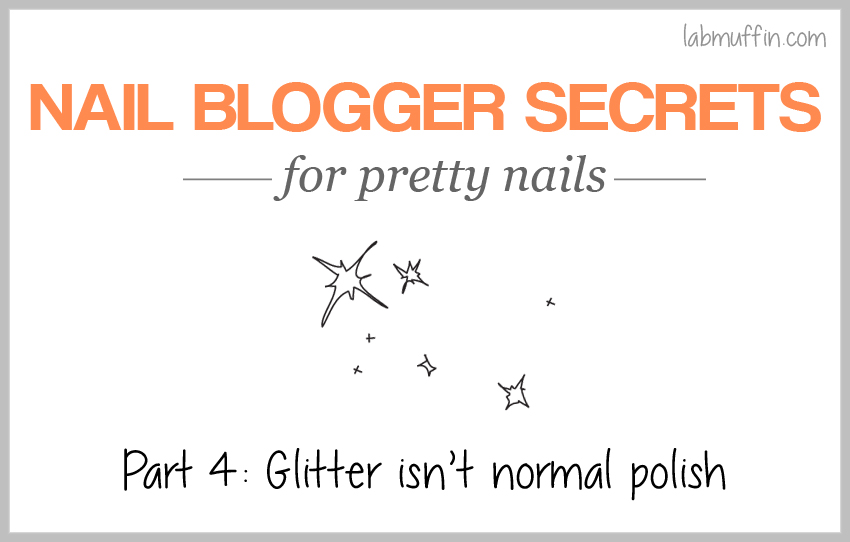 There’s a special moment when a polish-lovin’ nail fiend first discovers glitter. Not fine, sprinkly glitter top coat (though those deserve love too), but chunky glitterbombs. For some ladies it’s an OPI or a random dollar-store cheapie. For others, it’s straight into the crazy-awesome indie world, with jelly bases, creme bases, matte and neon glitters.

For me, it was three years ago, and there was only one big name in glitter – Lynnderella. I was casually browsing some OPI swatches when I stumbled across my first Lynnderella photo. It blew me away. What was Lynnderella, and how could I get my hands on one?? (Even back then it involved knowing people and submitting wish lists, so I didn’t have my hopes up.)

Fast forward three years, and you can’t Google nail swatches without bumping into a chunky glitter or two – most big name commercial brands have a few indie-style glitters, and there are more indie brands than you can shake a clean-up brush at. But before you dive in and hunt down all the shinies, there are a few things you need to know…

Where do I buy this mythical glitter?

Nowadays, it’s not too difficult to buy glitterbomb polishes. Back when I first started blogging, the only mainstream full coverage glitter was OPI Rainbow Connection, and the only way to get your hands on Lynnderella was through a complicated wishlist system. Now, it’s pretty easy – most mainstream brands have a few chunky glitters, there are quite a few indie distributors, and glitter polish is all over Etsy. While the vast majority of indie polish makers know the rules of the game and offer quality products and excellent customer service, like in any other field, there are a few who are unscrupulous – use your Google-fu before you open your wallet.

Many of these ship worldwide, but postage will obviously be less if you pick one close to you.

Lacquerheads of Oz have a frequently updated list of Aussie indies, their social media links and stores and stockists. xoxo, Jen and Things I Love At the Moment both have super comprehensive, US-centric lists of individual brands’ stores.

Many mainstream brands have indie-like chunky glitters these days. A few notable commercial brands who do particularly interesting glitters are Australis, Face of Australia, Claire’s and Sportsgirl.

You can get away with applying some glitter polishes like normal polish (stroke it on, in a few strokes). For the majority of chunky glitters though, you should be dabbing the glitter on, otherwise the glitter will just drag and mess up the layers underneath.

For video demonstrations of different ways of dabbing glitter on for good coverage, check out these posts by two experienced Aussie indie lovers – More Nail Polish (at the bottom of the post) and The Reluctant Femme (skip to around 3:00).

Frequently, glitter polishes will also need undies. Many glitter polishes are designed to be worn over another polish that’s more opaque – sparse glitters in clear bases, in particular, aren’t meant to be worn alone on the nail (I’ve committed this nail faux pas back in my naive high school days – don’t do it! It’s like seeing a red G-string through too-tight white pants). Sometimes tinted bases are quite sheer to allow you to build depth without having the glitter in the lower layers disappear – opinion is divided on whether visible nail line is a no-no in this case. Either way, don’t be afraid to layer and test out new combos!

Another issue is that glitters often dry bumpy (which isn’t really such a surprise, since glitter is solid). Sometimes this is fun, but if you want a smooth, glassy finish, you need a special top coat, commonly known as a glitter food. Common top coats used for smoothing out your glitter polish into a buttery smooth, skateable surface are Essence Gel-Look Top Coat, Nail Pattern Boldness Glitter Food, and old gloopy Seche Vite. Since the glitter food layer will usually be thick to fill in the holes in your glitter layer, you’ll probably want to use a quick-dry top coat over it (see the first part of the series for more about quick dry top coats). 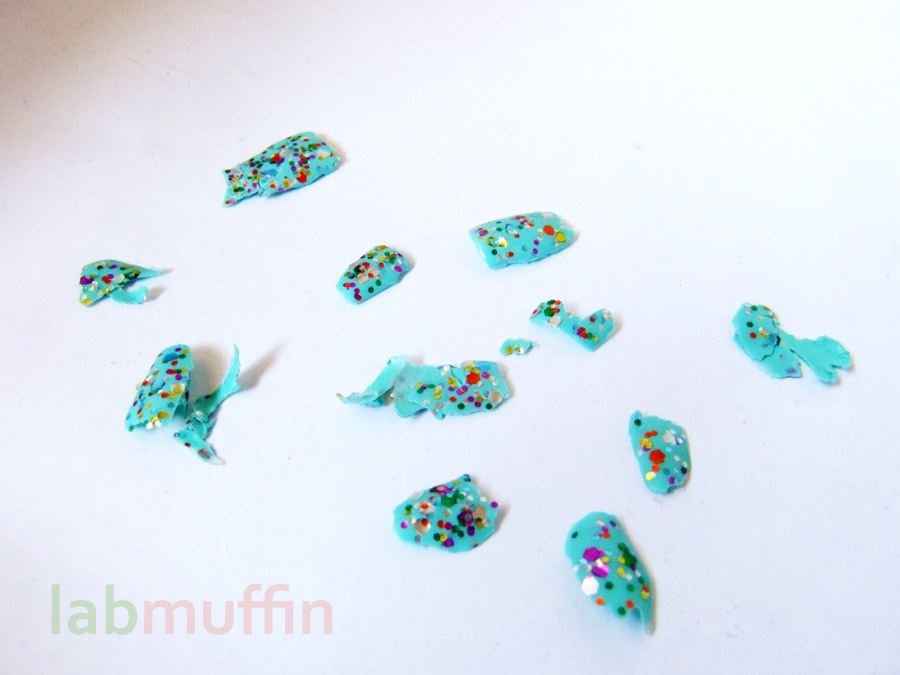 The most common complaint I hear from both nail newbies and people who have loved polish for decades: “Glitter polish is so pretty, but such a pain to remove!” Where there’s a will to wear pretty indie polishes, there’s a bunch of bloggers working out ways of taking them off without damaging the nail (because then you can wear more polish). 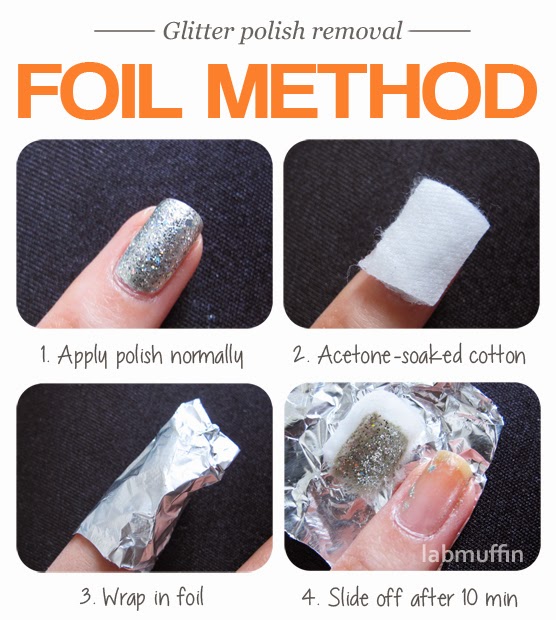 This requires no extra preparation when you’re putting on the polish, but some extra patience when you’re taking it off. This method involves cutting up little pieces of cotton pad to just fit on your nails, dipping them in acetone or other remover, placing them on your nails and wrapping each finger in a cocoon of foil. After 10 minutes or so, you can slide the foil and cotton wool off the nail and most of the glitter with it (you can repeat if needed, or just use the non-glittery side of the cotton to wipe off the leftovers). 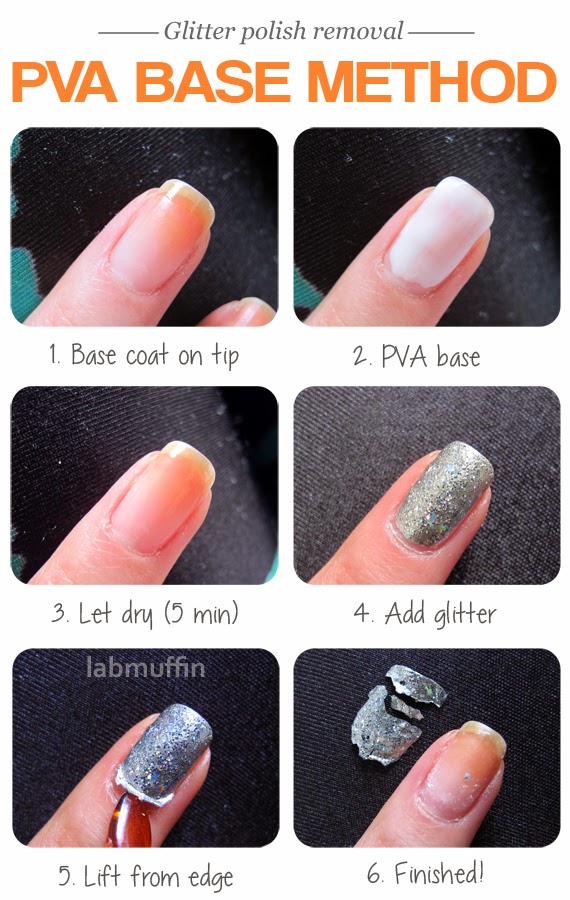 This requires a bit of preparation when you’re applying the polish, but removal is possibly even easier than regular polish removal. You add a coat of what’s essentially diluted PVA glue as the very bottom layer of your manicure, and when it’s time for removal, you simply peel off the whole manicure (I’ve found that it’s easier straight after a shower, because the glue dissolves a bit in hot water, though this runs the risk of damaging fragile wet nails). I add a French tip of base coat under the PVA base to prevent premature peeling, as shown in the image above. You can see a demonstration by Pretty Purple Polish here, and some extra info on troubleshooting PVA removal here.

Other methods include these creepy “adult toy”-looking jars with scrubby rubber flaps (efficient but can be harsh on your skin), picking it off (massive damage, and you walk around with ugly nails for a while), and accidentally putting too much Seche Vite on your nails and having them fall off like beetle shells (effortless and non-damaging but unpredictable and usually unintentional).

So you’ve spotted an amazing glitter in a craft store – how do you get that sweet business onto your nails?

Well, sadly, the answer isn’t to dump it into clear polish and hope for the best. Unfortunately, the solvents in nail polish love dissolving the sorts of things glitters are commonly made of, like plastic and paint. What you need are solvent stable glitters. These are tricky to find, and quality indie makers will test glitter stability for months before they even think about selling them. Common issues are when the colour comes off into the base or changes over time (aka bleeding glitter, which can sometimes leave interesting stains on your nails), or the glitter shape warps (aka curling or taco glitter, which can sometimes be a good thing that gives the glitter more interesting shine, but is usually just a source of frustration when you can’t get the glitters to stay flat on the nail).

Since this is a lot of work, it’s common for indie makers to guard their glitter sources closely, but some well-known suppliers of solvent-stable glitter are TKB Trading, Beauty World and Glitter Unique. (Note: not all the glitter from these stores are entirely solvent stable, not even if the store claims that it is. If you’re planning to sell glitter polish, you should thoroughly test glitter to avoid future drama; on the other hand, if it’s just for personal use you can do what you want).

But what if you love that melty bleedy glitter to bits, absolutely need it on your nails and can’t find a solvent-stable substitute?

Instead of sticking it in a polish, you can do it old-school style – apply a base layer of polish (match it to the glitter if you can), then depending on the size of the glitter, the density you want and how much you have, you can either dip the wet polish into the glitter, or sprinkle glitter on top. To make it last, cover the glitter with top coat (if it bleeds really badly, you can dab on the top coat to minimise streaking).

What have I missed on glitter? Let me know in the comments below!

Tune in for the next installment – how to look after your wallet while hoarding polish (we can’t live on glitter alone, apparently). 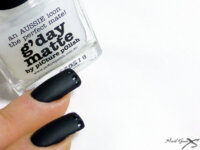 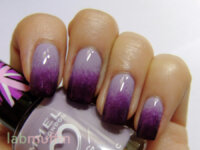 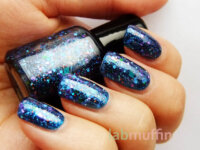