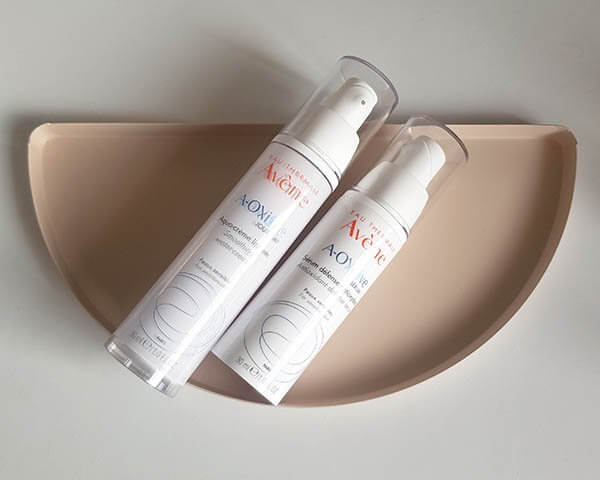 Affiliate Disclosure: I receive a small commission for purchases made via affiliate links.
Sponsored PR Sample

I’ve been really happy to see more vitamin C products hit the marketplace recently. Vitamin C is one of my favourite skincare ingredients – it’s a powerful antioxidant that’s fantastic for soaking up free radical damage, which makes it great for evening out skin tone and reducing fine lines. As someone who’s very prone to hyperpigmentation, particularly sunspots and post-acne marks (post-inflammatory hyperpigmentation), vitamin C is a must-have in my skincare routine.

Avène’s A-Oxitive is a new range that contains vitamin C, in a more stable form than the more commonly used ascorbic acid.

Ascorbic acid is pure vitamin C, and it’s the version used in most vitamin C serums (like my DIY serum). It’s fantastically effective and there are the most studies on it, but it has some big drawbacks:

Because of the drawbacks of ascorbic acid, vitamin C derivatives are becoming more popular – this is when the ascorbic acid molecule’s been altered. Ascorbyl glucoside is the derivative used in Avène’s A-Oxitive products. It’s ascorbic acid with a glucose molecule stuck to it, and it’s approved as a pigmentation-fading quasi-drug in Japan: 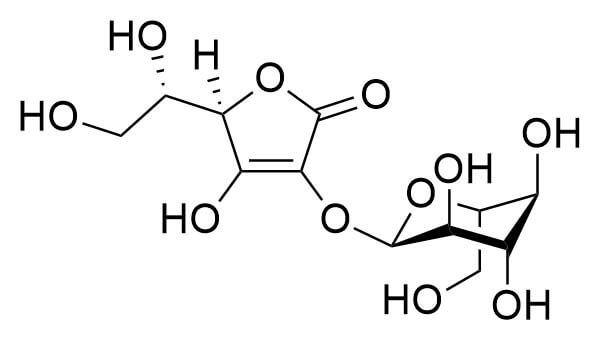 Having this form of vitamin C in the A-Oxitive range has a lot of benefits:

Using ascorbyl glucoside means that in A-Oxitive, the vitamin C is much more stable. That means it’s more effective because it’ll reach your skin intact. It also doesn’t decompose enough to stain your skin and it doesn’t have a weird smell.

Vitamin C is also more stable when it’s combined in a product with other antioxidants like vitamin E, since they can regenerate each other after they react with free radicals. This also means that they work more effectively once they’re on your skin. In the A-Oxitive range, tocopheryl glucoside is the form of vitamin E used.

The ascorbyl glucoside in A-Oxitive also slowly converts back into ascorbic acid, giving it a gradual release effect – this also makes it much less irritating.

When discussing vitamin C derivatives, there’s always a question around whether they can actually penetrate skin and convert back into ascorbic acid to have the same effects. Ascorbyl glucoside is one of the best derivatives in this respect. It’s been shown to protect skin against UV in a clinical study on humans, and it’s been found to stimulate collagen synthesis and reduce pigment production in in vitro cell studies.

For the A-Oxitive Antioxidant Defense Serum, in vitro studies have been done on skin samples that show that ascorbyl glucoside penetrates into the skin, and is converted back into ascorbic acid (the glucose molecule is chopped off by skin enzymes), so it can have the same effects.

The 1.8% ascorbyl glucoside in the A-Oxitive serum might sound low, but it’s been tested to give similar antioxidant protection against UV to another 15% ascorbic acid (pure vitamin C)serum in an in vitro study on reconstructed human epidermis.

Avène A-Oxitive Antioxidant Defense Serum is a super lightweight hydrating serum. It contains 1.8% ascorbyl glucoside in the formula, which was found to be equivalent to 15% ascorbic acid at protecting against UV. Along with the ascorbyl glucoside, there’s also vitamin E (1% tocopheryl glucoside) and 0.045% GP4G (artemia extract), which has an additional antioxidant effect. It contains plenty of glycerin, a powerful humectant ingredient that keeps skin hydrated, and Avene thermal spring water, which is soothing and reduces irritation. 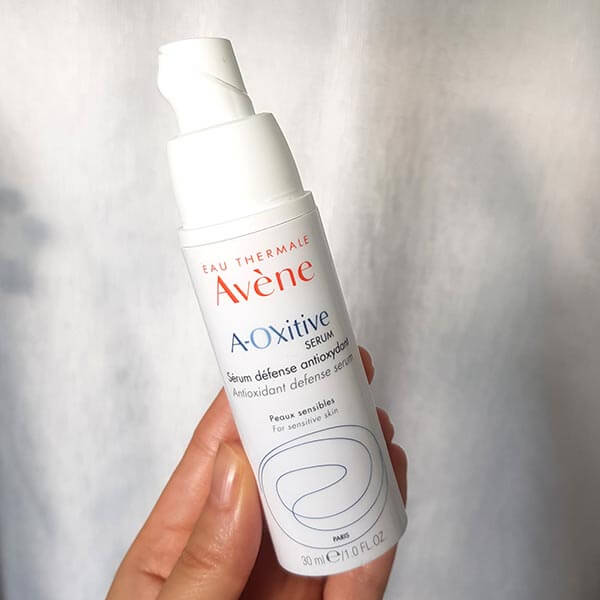 Related post: What is thermal water and how does it work in skin care?

Avène A-Oxitive Smoothing Water-Cream is a refreshingly light and hydrating moisturising lotion. Like the serum, it also has 1.8% vitamin C (ascorbyl glucoside) and 1% vitamin E (tocopheryl glucoside). It also has copper and purple pigments to make skin look smoother and more radiant.

Avène have also conducted an invitro study on skin samples showing that this cream helps keep pollutants (benza[a]pyrene, PM 2.5 and PM 10) confined to the surface of the skin, and there’s 64% less pollutants penetrating into the skin at 24 hours after application. 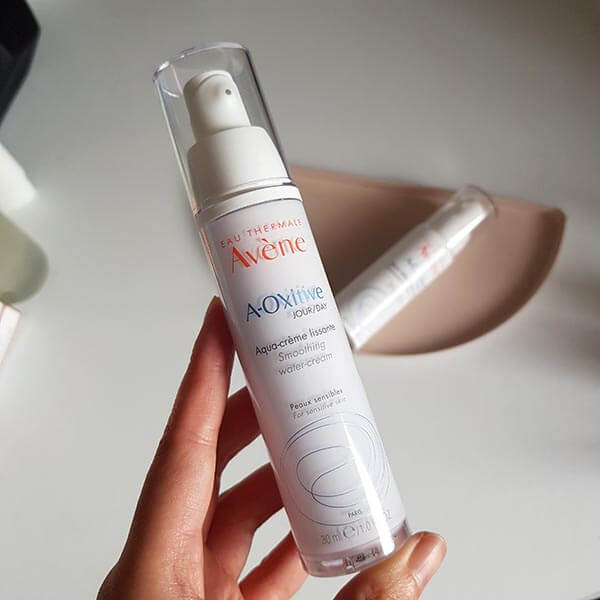 Both products are thick enough that it’s easy to apply, but sink in quickly. The serum pretty much disappears into the skin after application (but still leaves it hydrated), so it’s very comfortable to wear during the day under sunscreen and it’s easy to layer in a routine at night. Both are lightly fragranced, and come in airless packaging which protects the formula against oxygen which can oxidise the vitamin C and make it ineffective. 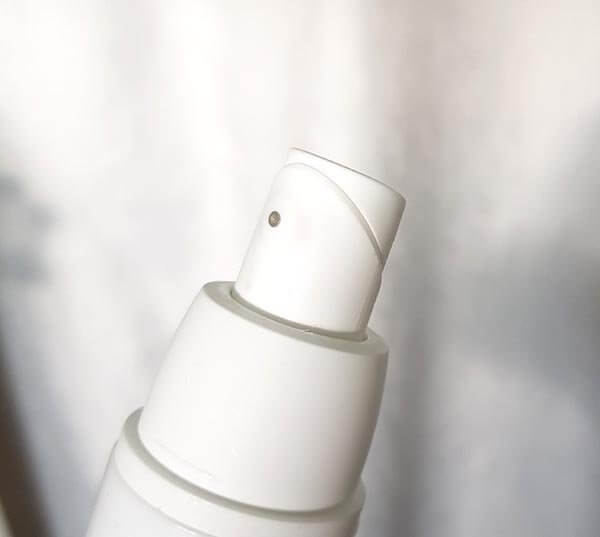 The day cream is a little more substantial and leaves my skin feeling more “moisturised” after application, so it’s been a fantastic option for dry winter weather during the day – again, it absorbs quickly and is easy to layer for both day and night. During the 4 weeks that I tested these products, I found that my post-acne marks faded very quickly, as I expected from an effective vitamin C product.

I’ve always had issues with wearing sticky and smelly ascorbic acid serums under sunscreen during the day, even though I knew full well how great vitamin C is for sun protection. These products are the most cosmetically elegant vitamin C products I’ve tried, and get around all of my complaints about ascorbic acid. I’ve been reluctant to stop using ascorbic acid because of the lack of evidence on how effective vitamin C derivatives are, so it’s very reassuring to see that the finished products have been tested for effectiveness, in addition to independent studies on ascorbyl glucoside alone.

Do you use vitamin C? Which products do you use?

This post is sponsored by Avène; however, the content is all based on my independent research and my honest experience. For more information, see Disclosure Policy. 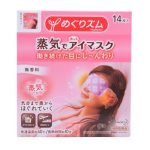 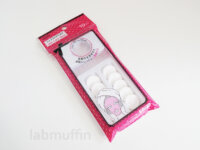 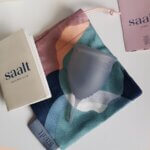 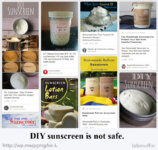