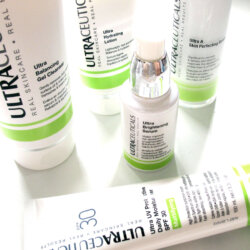 Ultraceuticals is an Australian cosmeceutical skincare brand with a strong focus on scientifically-backed, effective products. I was invited to take part in their RVR90 program where I had to commit to using their products and treatments for 3 months (fellow beauty bloggers will know how crazy this is). I’m excited to share my results with you today!

Ultraceuticals was founded in 1998 by Dr Geoffrey Heber, a cosmetic physician was the first to bring alpha hydroxy acids (AHAs) to Australia. As well as take-home products, they offer in-clinic treatments at a variety of spas and salons around Australia.

RVR90, which stands for Real Visible Results in 90 Days, involves 3 steps. First, you discuss your skin concerns with a skin technician and decide what you want to work on. Next, you receive an RVR90 starter pack for your skin type, containing cleanser, lotion and sunscreen, plus an appropriate serum ($199). Finally, you’re prescribed a treatment and homecare plan to address your specific concerns. Ultraceuticals believes that 70% of results are achieved through homecare while 30% is from in-clinic treatments, so if you don’t like in-clinic treatments you can still get most of the benefits.

I decided to target my hyperpigmentation, since I have some pigmentation happening on my cheeks (yay Asian genes), and the treatment would also help with congestion and acne as well. I was prescribed the Oily/Normal pack (surprise!), and was given the Ultra Brightening Serum to start with, then the Ultra A Skin Perfecting Serum a bit later on.

I was given three 30 minute Radiance Plus+ in-clinic treatments over the 90 days by Tracey Beeby, the Head of Global Training at Ultraceuticals. This consisted of:

I was initially a bit skeptical that I’d see much of a difference in 90 days since my skin was already pretty good and the treatments were pretty painless (slight prickling and heat but nothing close to burning), but when I saw my before-and-after photos and skin analysis I was very impressed.

Here are the photos, with Day 0 on the left and Day 86 on the right (I couldn’t make it in on Day 90). I look a bit like I’m going into surgery with the hair net… 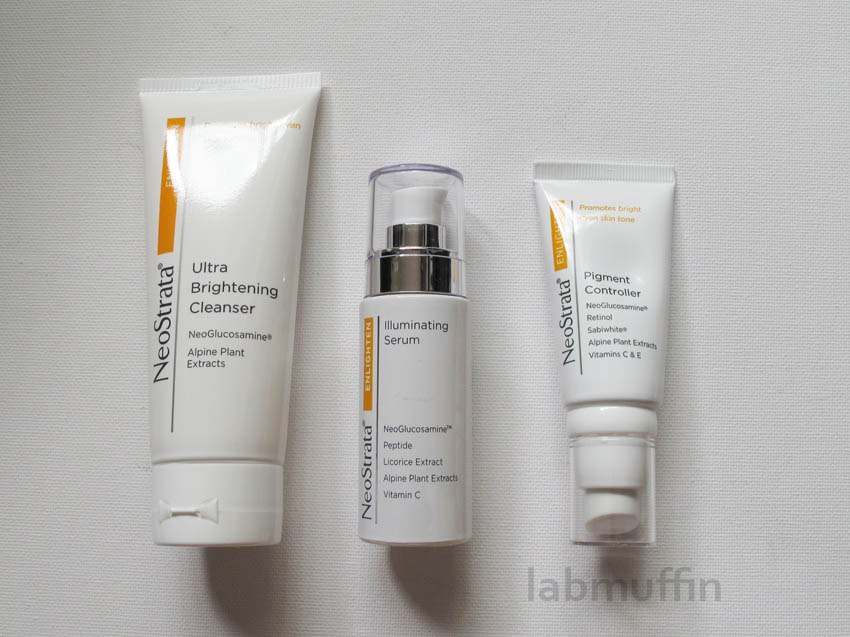 Neostrata have recently released a range called Enlighten recently, which claims to lighten spots and reduce hyperpigmentation. Will it work? You may remember a recent post here on non-hydroquinone skin lighteners – for more information on the whiteners mentioned here, you can refer back to that. Neostrata Enlighten Ultra Brightening Cleanser ($39.95 for 100 mL) is a creamy cleanser that …

This week’s Fact-check (it’s late, I know, sorry!) looks at another controversial skincare ingredient, hydroquinone. What is hydroquinone, what benefits does it have in skincare, why do people say it’s harmful, and is it actually bad? Let’s find out… What is hydroquinone? Hydroquinone (sometimes referred to as “HQ”) is a chemical with the structure shown below: It occurs naturally in …

In the beauty world, hydrogen peroxide is the bleaching agent par excellence. It whitens hair, nails and teeth as well as having a host of household uses. I’ll expand more on the chemistry behind how it works in a later post, but it’s the practical use of hydrogen peroxide in teeth whitening that will be the focus of this post. … 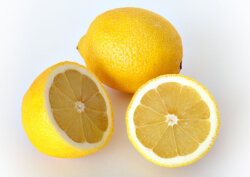 (André Karwath/Aka) There are a lot of things that are supposed to be good for your skin. Today I’m looking at one that is in a lot of anti-ageing products, and has rave reviews on Makeupalley – vitamin C. Vitamin C (aka L-ascorbic acid) is essential in your diet – it has a lot of roles in the functioning …