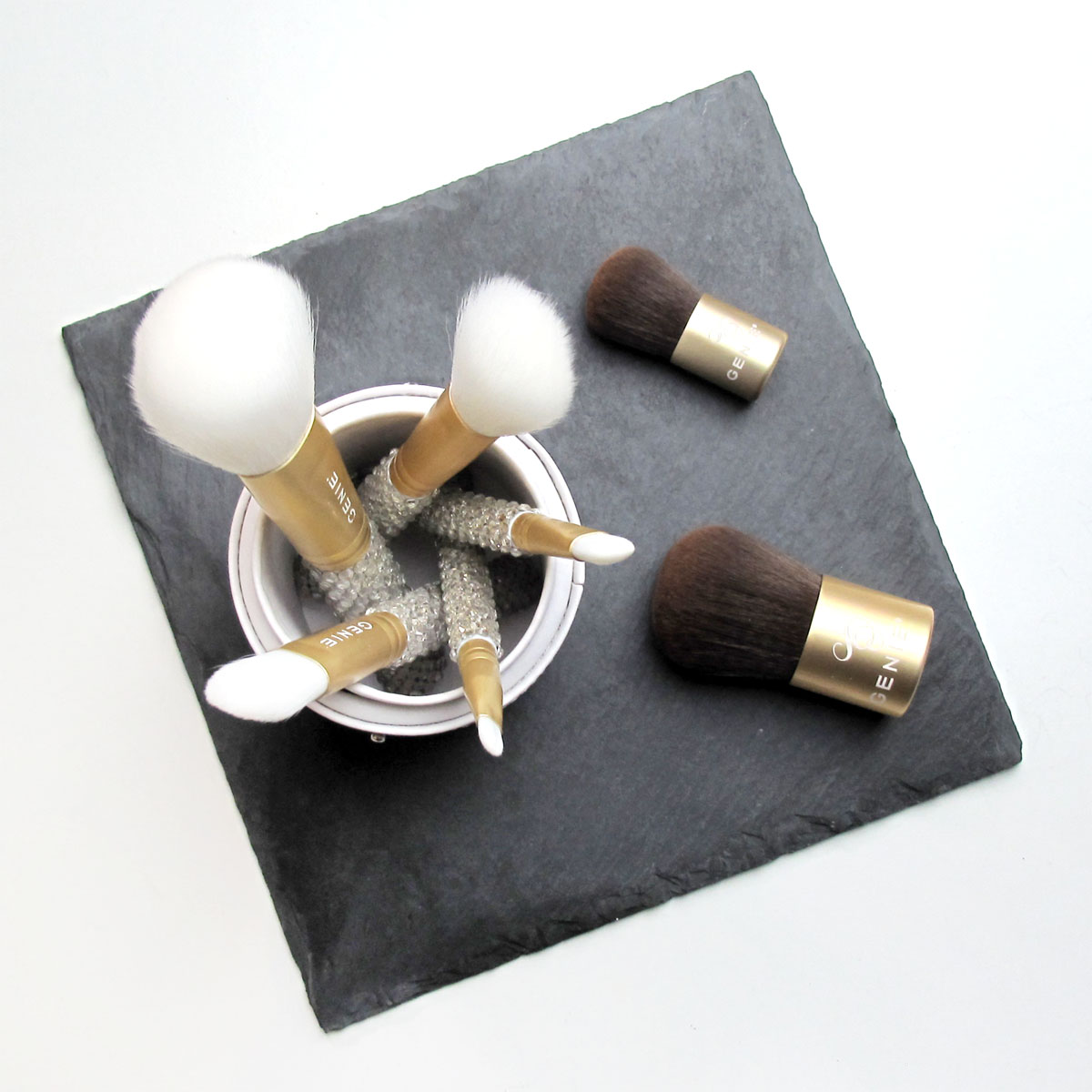 I recently had the chance to meet Lisa Claycomb, the product developer who started the “instant skincare” brand Genie Beauty Products, and learn all about their products. Genie has been a hit on shopping networks QVC and TVSN. What really struck me about Genie were their product innovations, and how much sense they made once Lisa explained them to me. Here are some of their coolest products: 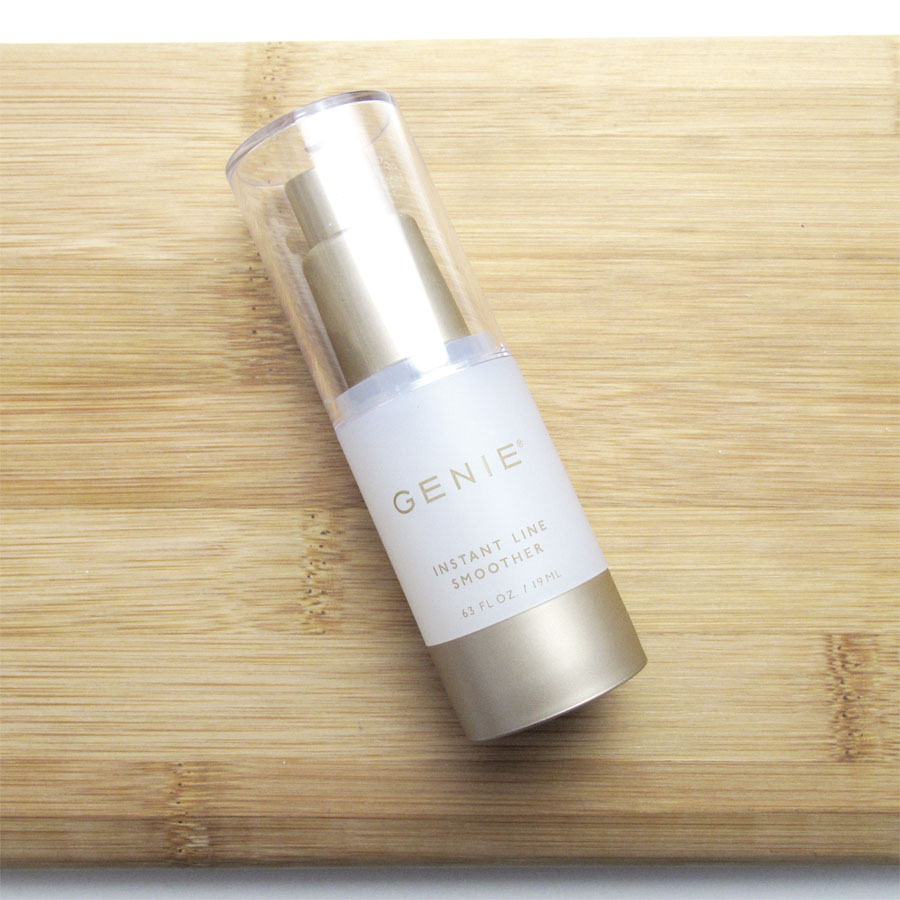 Instant Line Smoother ($59.95 AUD / $38 USD for 19 mL, $99.95 AUD for 30 mL) is the hero product from Genie Beauty. It’s based on film forming ingredients that dry to make a tightening film, filling in lines and flattening out puffiness and sagging skin. This gives your skin an instant pick-me-up in just 2 minutes! You can also mix it into liquid foundation. It dries clear so you don’t need to worry about weird colours, and it contains moisturising collagen, aloe vera and silk proteins to hydrate the skin underneath. I found that it flattened out my undereye area nicely, and as a bonus, my concealer creased less too. There are some stunning before-and-afters on their site showing Instant Line Smoother on people with serious crows feet and sagging – this is definitely worth trying if you’re considering a facelift! 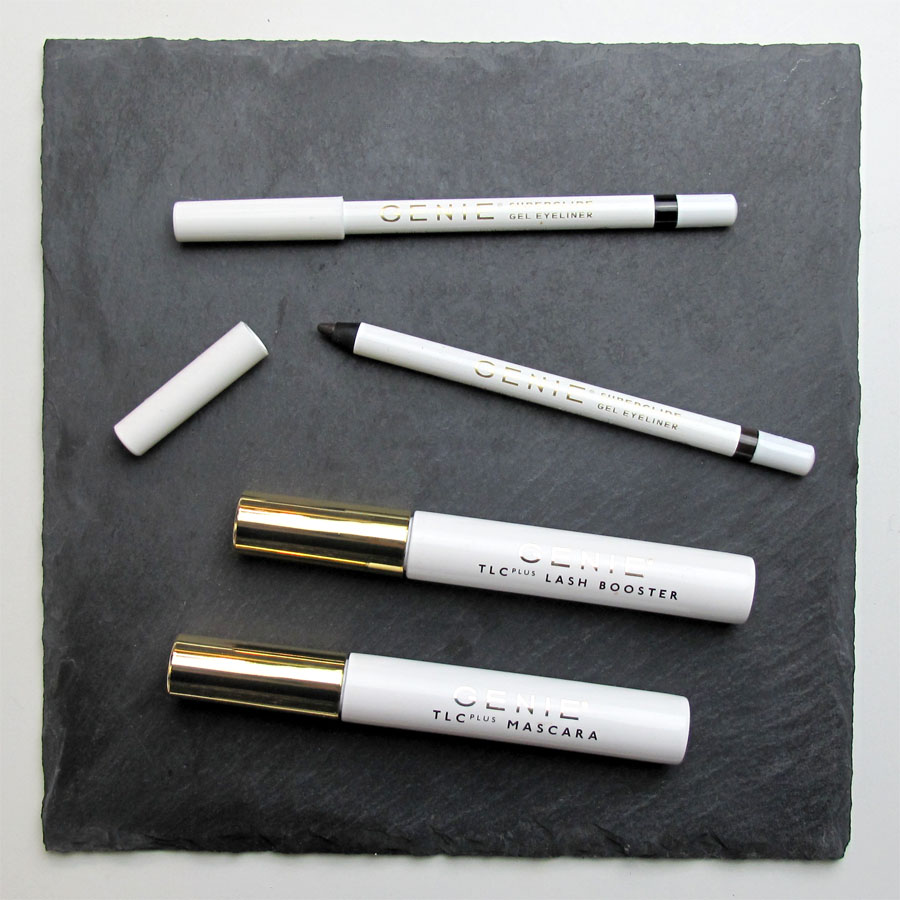 Million Dollar Lash Kit ($29.95 AUD / $15 USD for Lash Booster or Mascara, $39.95 AUD / $25 USD for both, 10.8 mL each) is the best booster/mascara combo I’ve tried so far. The TLC Plus Lash Booster goes on white and has a curved brush for easy application. It extends your lashes quite impressively and is compatible with any mascara. The TLC Plus Lash Mascara has a cool V-shaped applicator that applies 2 coats of mascara with one swipe. Both the lash booster and mascara are loaded with beeswax, carnauba wax and silica and nylon fibres to thicken and lengthen your eyelashes. Here’s the before and after on my lashes: 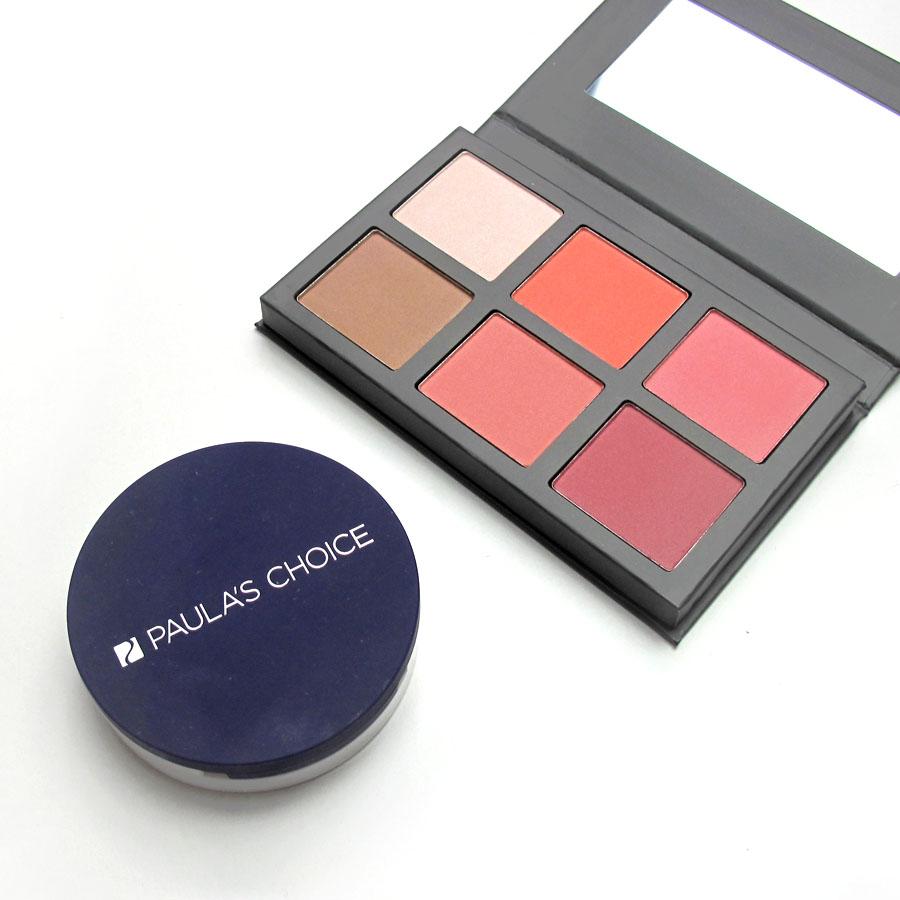 I love Paula’s Choice products, but I hadn’t used any of their makeup products until I tried the Blush It On Contour palette and the Resist Flawless Finish powder recently.

The Blush It On palette ($55 AUD/$36 USD from Paula’s Choice or Amazon) has a set of 4 blushes, a champagne highlighter and a taupe contour powder (all 3 g) in cardboard packaging. It includes a mirror that’s wide enough for both cheeks to be visible which is handy! The shades are (left to right): 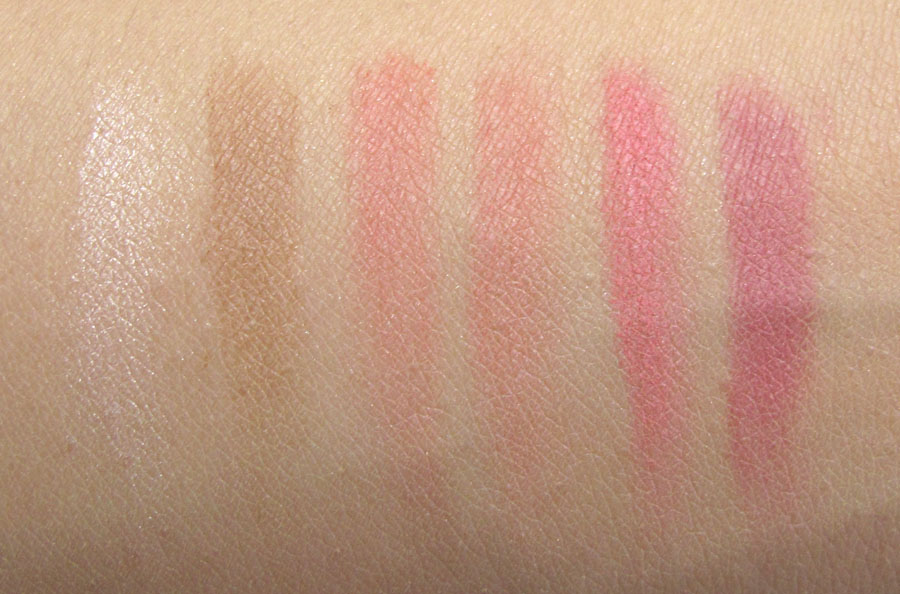 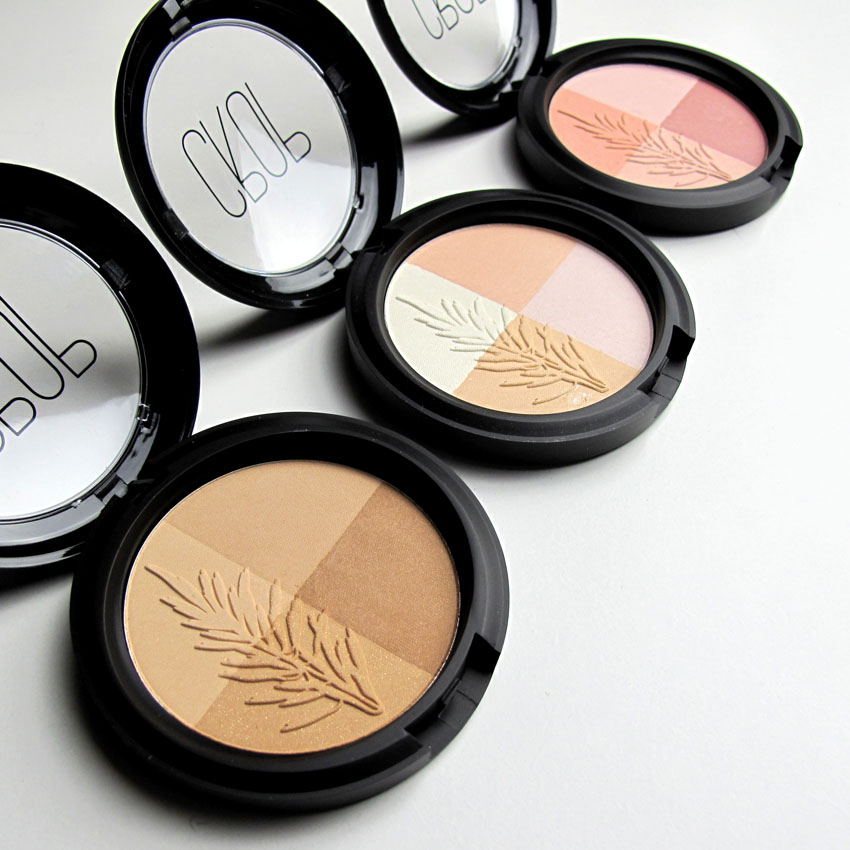 Natural Mineral Pressed Blush ($24 for 10 g) – One quad, Bouquet, in a black compact with a clear window

Natural Mineral Pressed Bronzer ($24 for 10 g) – One quad, Solaire, in the same packaging

Natural Mineral Pressed Highlighter ($24 for 10 g) – One quad, Aura, in the same packaging

2 in 1 Folding Mineral Kabuki Brush ($20) – Slanted synthetic fibre brush that folds together with a magnetic closure, or folds out into a flat fan shape for contouring. 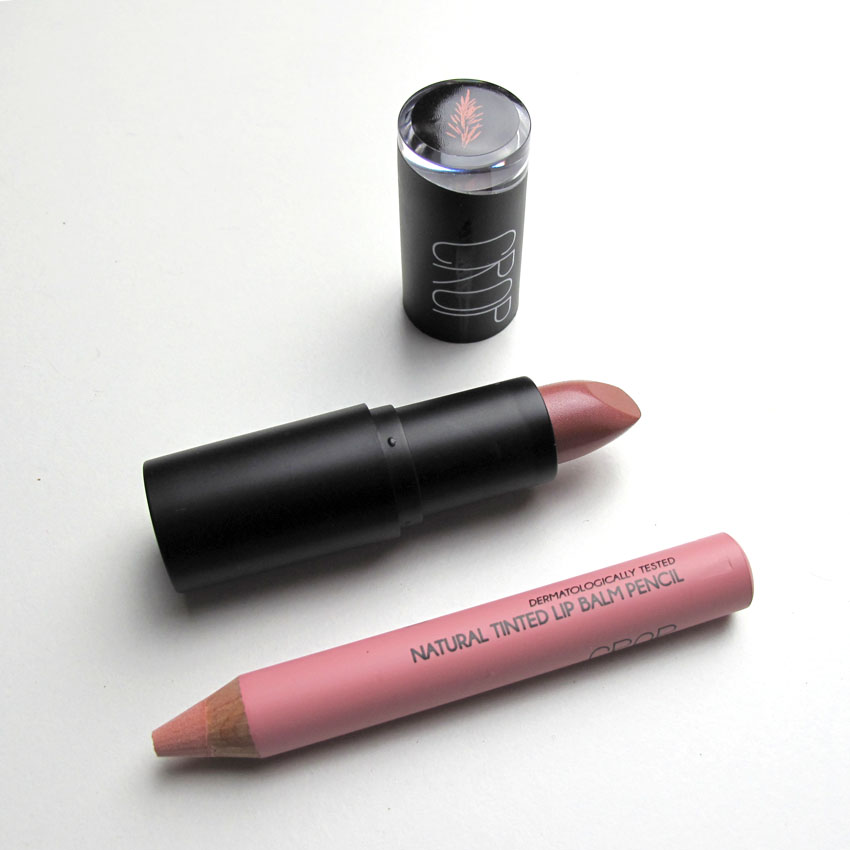 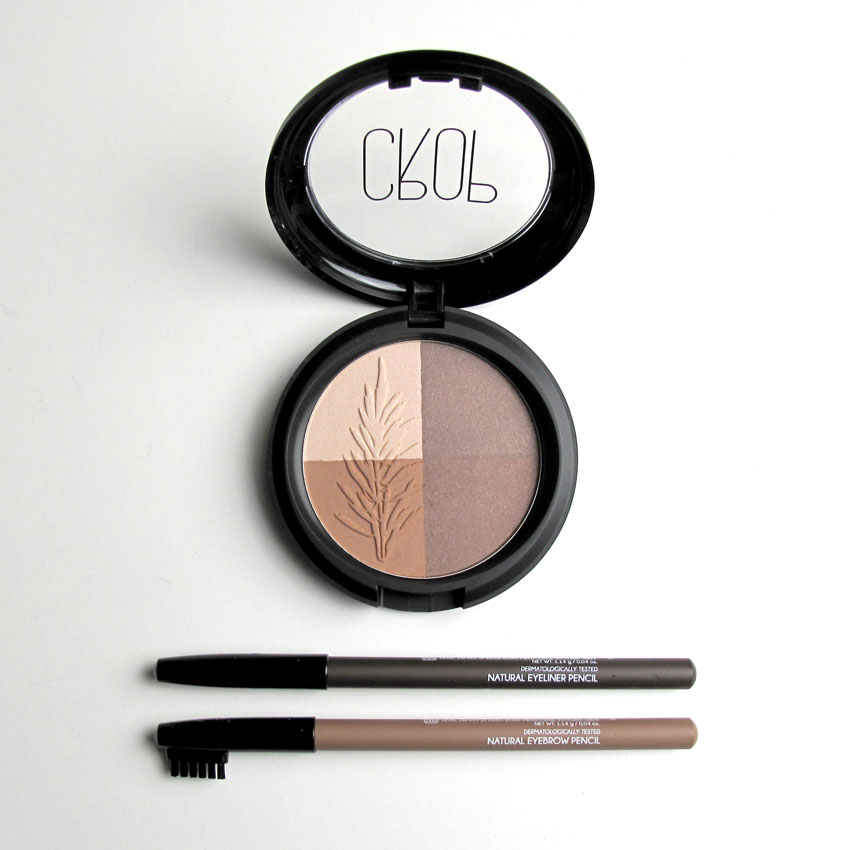 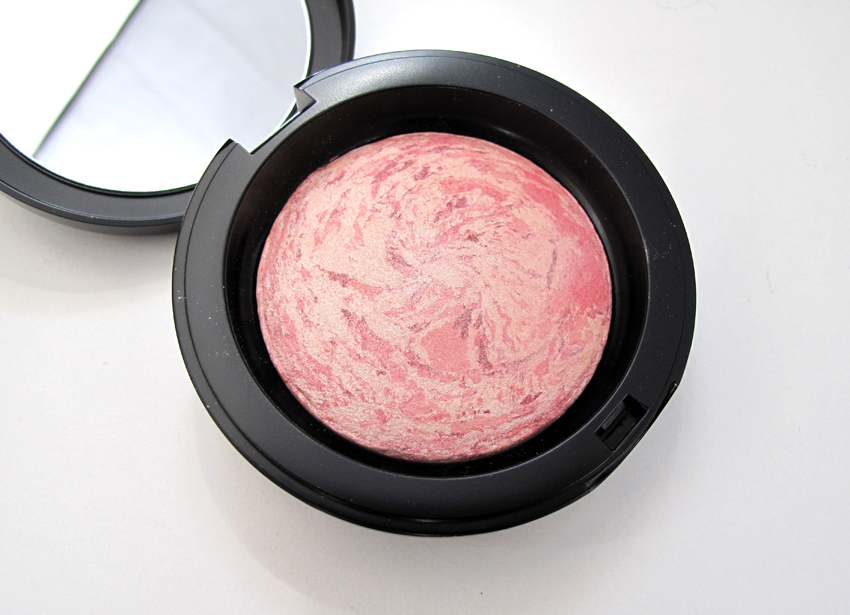 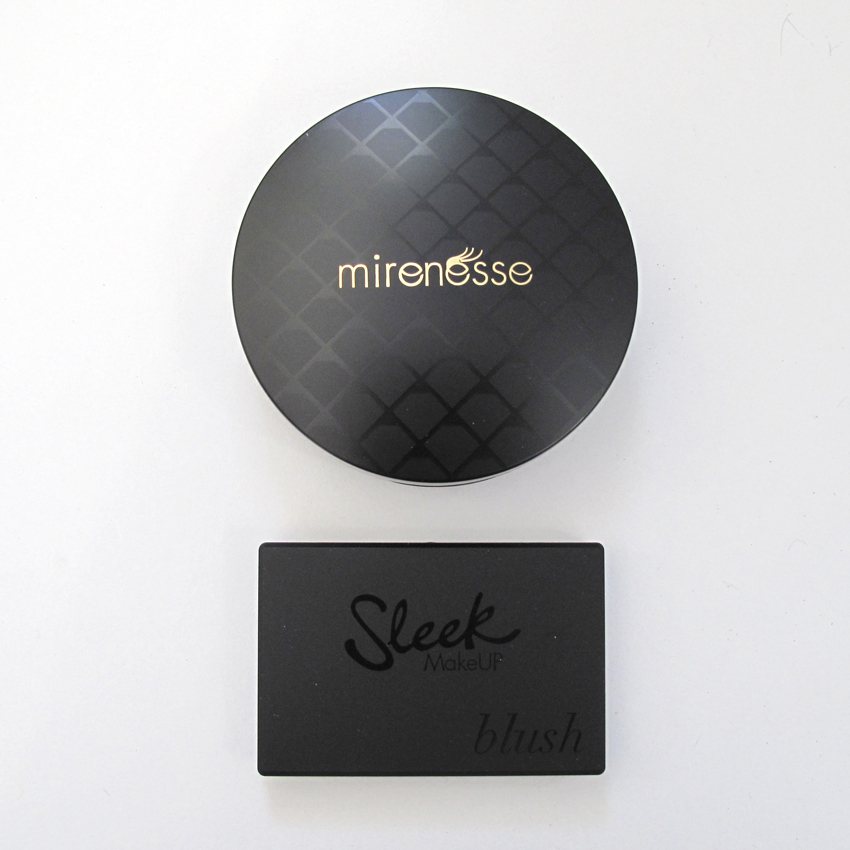 Online shopping is the bomb-diggity. There’s no pressure from pushy sales assistants, you have all the time in the world to do price comparisons and read reviews, plus you don’t have to wear pants! Luxola also stocks brands that don’t have a great presence in brick-and-mortar stores in Australia, like Mirenesse, Sleek and Wet ‘n Wild, so when they asked me if I’d like to try some of their blushes out, I jumped at the chance!

Mirenesse Marble Mineral Blush in Paros Pink ($60.99 for 12 g) – The marbled pattern is gorgeous in the pan, and it smells of rose – it’s easy to see why this has fantastic reviews everywhere! Paros Pink is a little light for me to use alone, but it makes for a lovely cool pink highlight over the blush, with a pretty sheen that isn’t too sparkly. 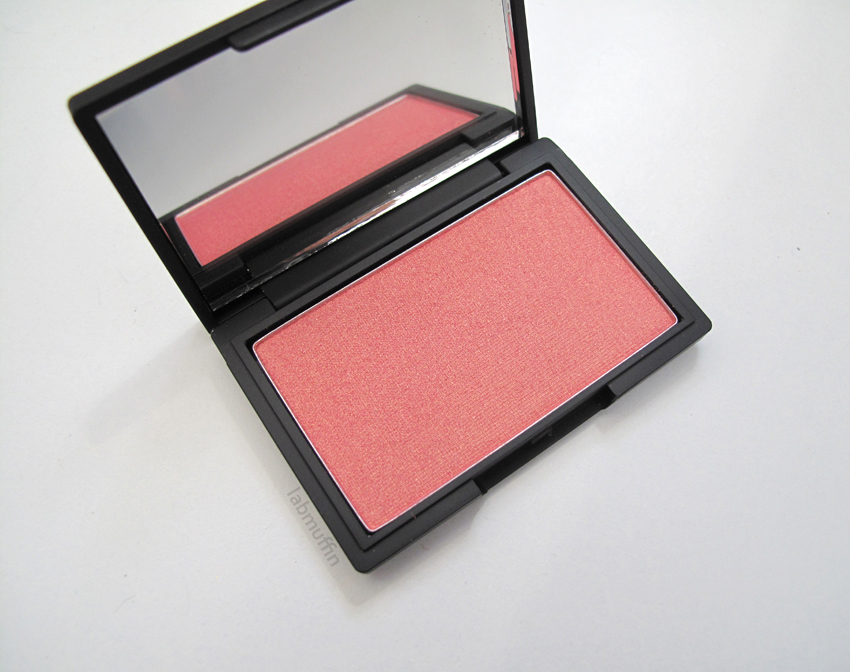 Sleek Blush in Rose Gold ($15.25 for 8 g) – This is a warm peachy pink with gold shimmer. On lighter skin this would be decently pigmented, but just like the Mirenesse blush, I mostly just get golden glow on my face. It’s a really pretty glow though, so I’m not complaining! 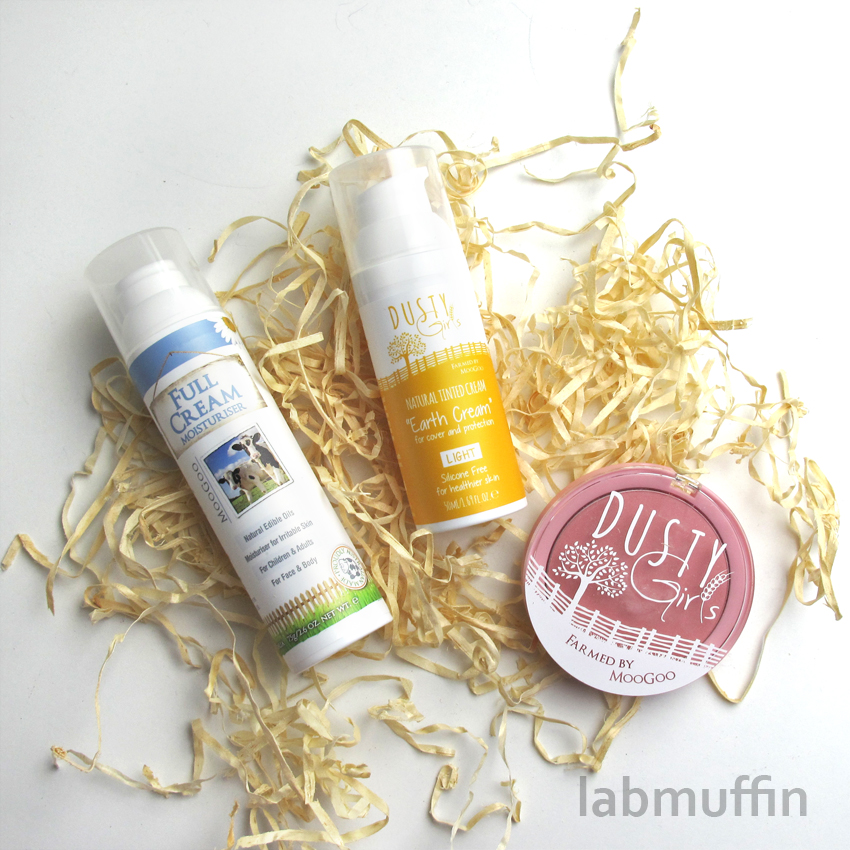 I recently had the opportunity to try out some products from natural Australian brand Moogoo, and their associated cosmetics line Dusty Girls. Moogoo are a cult brand for people with sensitive skin, so I was excited to try it out for myself.

Moogoo and Dusty Girls are on the natural marketing side of things, but they’re relatively sensible – though not always consistent.

For example, they have these encouragingly sensible statements that I wholeheartedly agree with, and address common myths that natural (and non-natural!) brands often exploit for sweet sweet profits:

But they also have statements that are a bit dubious: 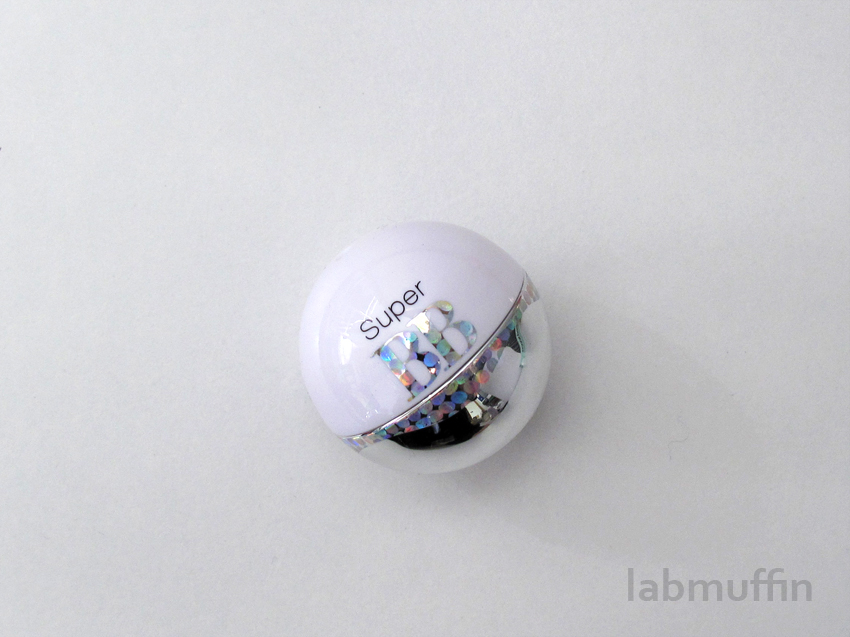 Physicians Formula has a giant range of blushes, and they’ve just launched a bunch more here in Australia. Here are some of the new ones that I’ve been trying out: 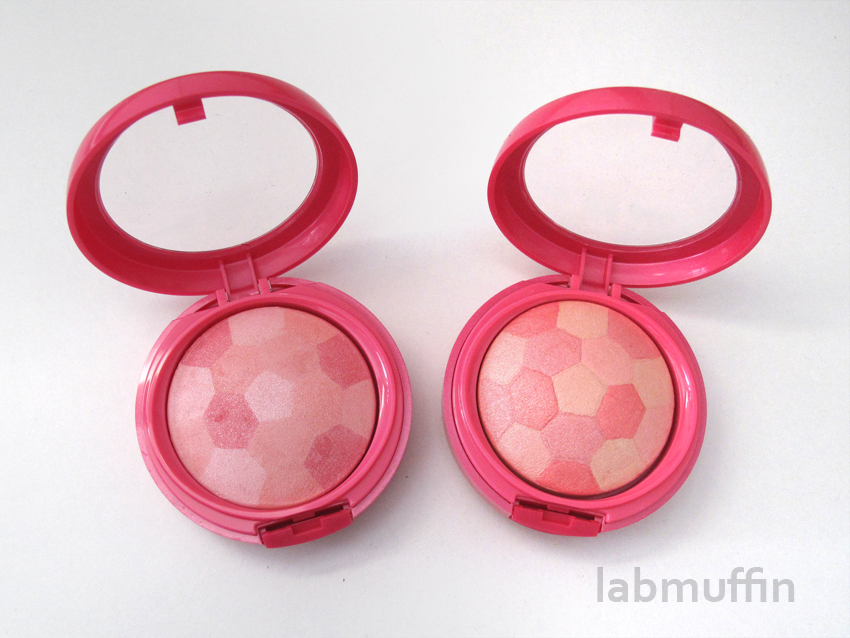 There are two baked blushes in the Powder Palette Bombshell collection – Blondes and Brunettes ($21.95). Blondes is a cool toned pink with silvery luminous particles, while Brunette Bombshell is a warm peachy pink with gold particles. The particles are a little on the chunky side, but they give a pretty glow. They can be used wet for a deeper colour, but I hardly ever do.

The names – ignore them. The marketing spiel claims that it’s the “first ever blush to complement your hair colour” – unless they’ve invented a new pink, this isn’t strictly true. It’s the first blush I’ve seen that’s marketed to complement your hair colour, and there’s a good reason why no one else does this: it’s pretty much universally acknowledged that makeup should complement your skin tone, and that there are plenty of warm blondes and cool brunettes. They actually both look fantastic on me, with Blondes giving me a pretty cold-weather flush and Brunettes giving a summery glow, so I think they’re doing themselves a disservice by discouraging people from trying the other shade based on hair colour. The formula is really easy to use – it’s pigmented just right for buildable colour that doesn’t need much blending work (though it blends well if you need it to).

My favourite thing about Physicians Formula blushes is the packaging. I’m all about portable packaging for midday touchups (#oilylife), and these Powder Palette blushes come with a mirror AND a brush under the blush compartment! I do kind of wish that the blush and the mirror were in the same compartment for ease of application, but this arrangement keeps the mirror cleaner and makes the blush prettier to look at in the clear window, so I guess I’m OK with it. The brush is not the best, but it’s pretty good considering it’s flat as a pancake. I prefer using it downwards across the cheekbone in short strokes rather than in long strokes along the cheekbone. 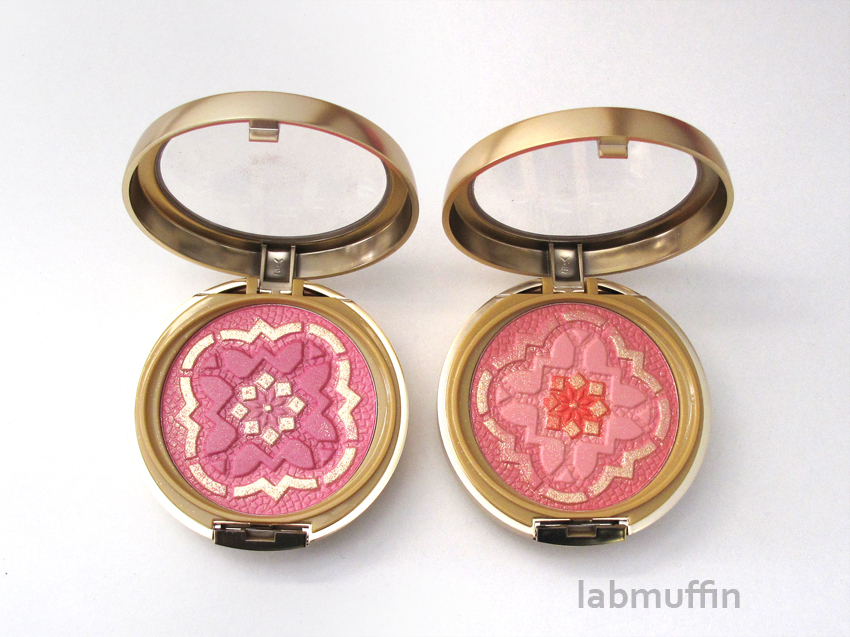 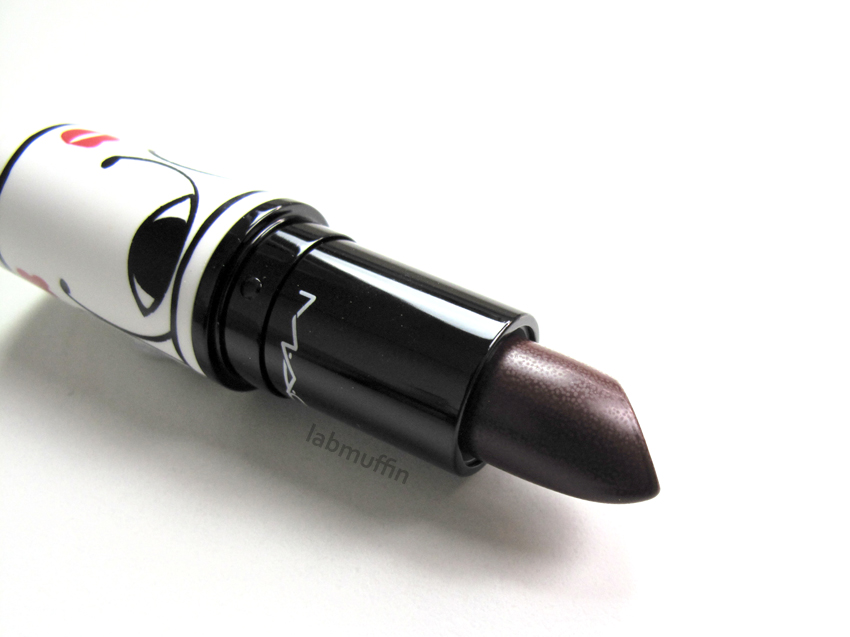 I love limited edition make-up packaging, and MAC do spectacular designs. Their Isabel and Ruben Toledo collection has one of my favourite designs so far! 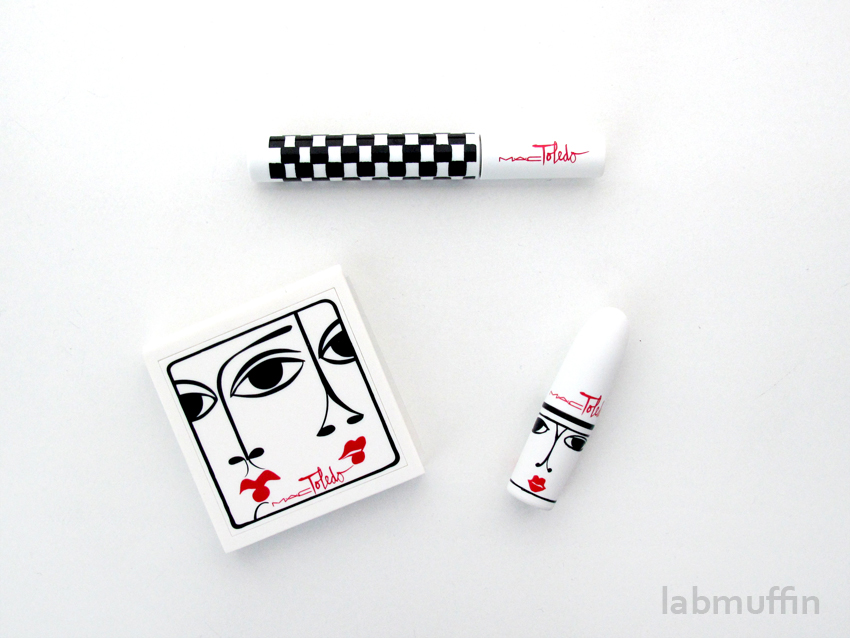 * Ripe Peach ombre blush ($54) is my favourite. It’s a flattering blend of coral-hued pink and apricot, with gold sparkle. The gold sparkle isn’t all that obvious on the skin. The colours in this blush look amazing on warm skin, and it’s buildable and easy to use. 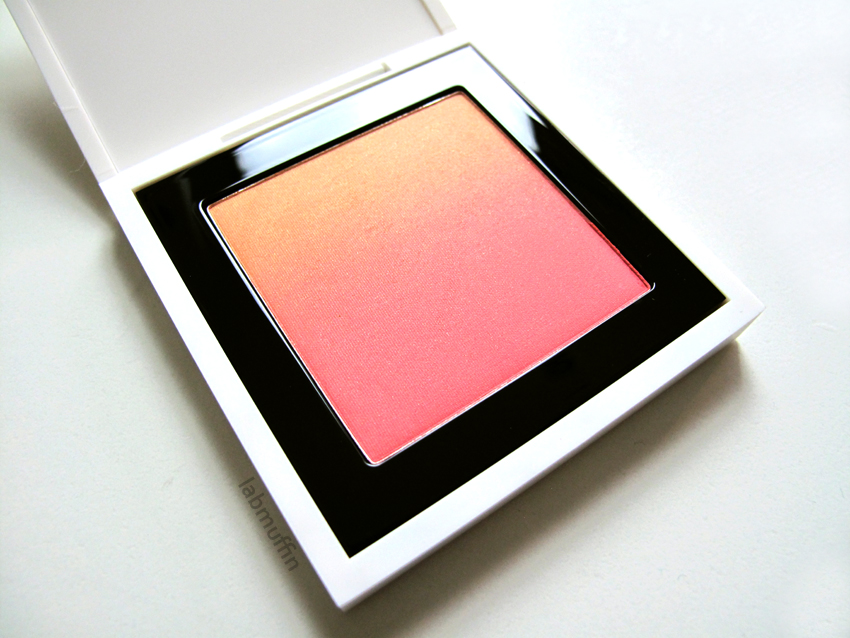 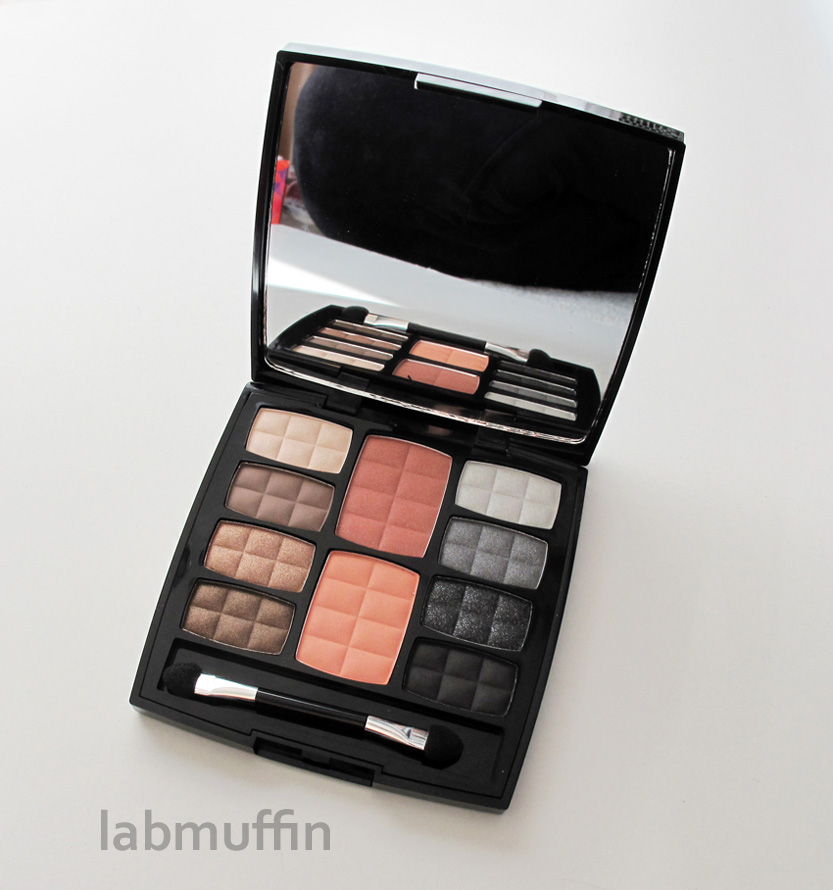 I’ve been really impressed with ulta3’s new products lately – ulta3 Eye and Cheek palette is my new favourite! I’ve been meaning to review this for ages, and only got around to it now.

It’s housed in an elegant-looking, glossy black square palette with a satisfying heaviness, and a deep solid click when it closes. I think packaging is really important for how “cheap” or “expensive” a product feels, and this palette really nails it in the luxe department – it feels like one of the better Australis palettes. 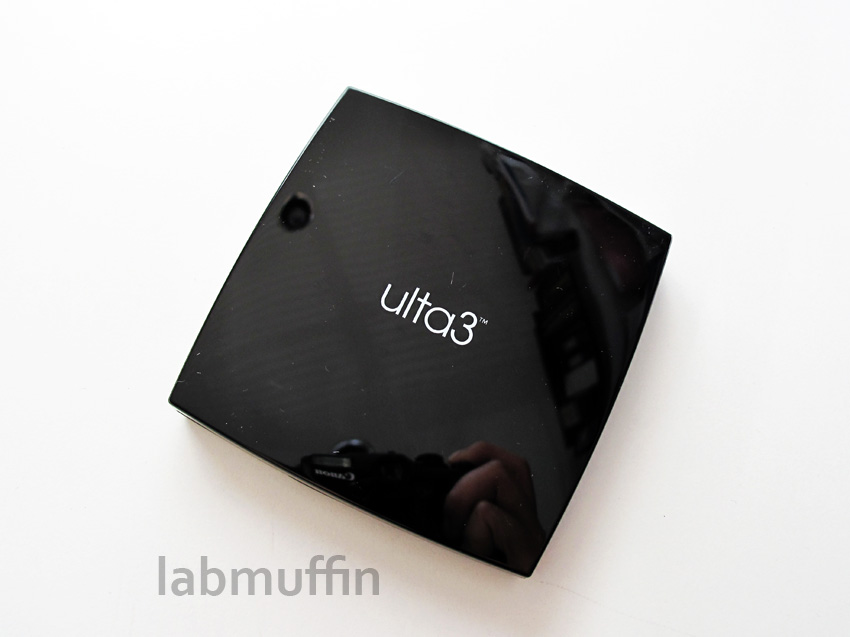 The entire inside lid is covered by a large mirror, which also adds to the upmarket feel of the palette. The powders are pressed into little bumps. The presentation is just so spot on for such a budget-friendly product. Well done ulta3!

Onto the actual products! The palette has two rows of eyeshadows, one brown/nude and one monochrome, separated by two blushes.