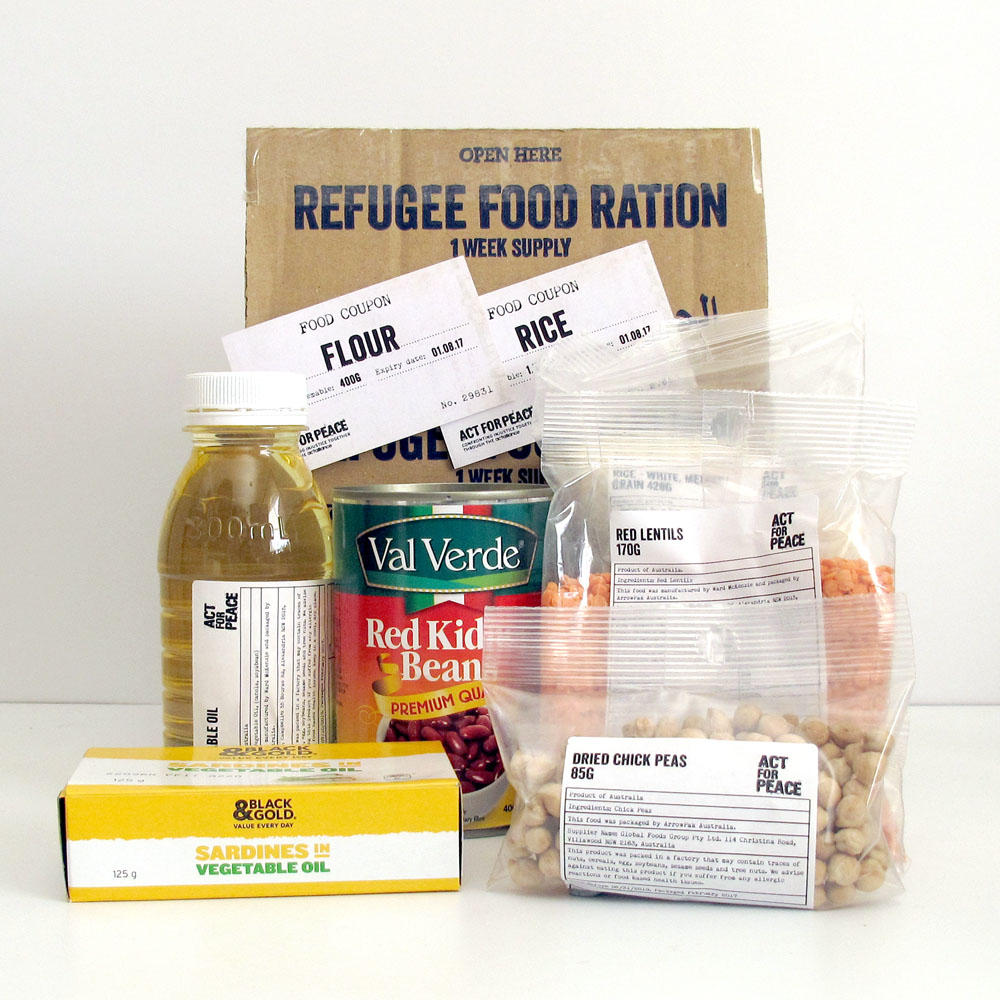 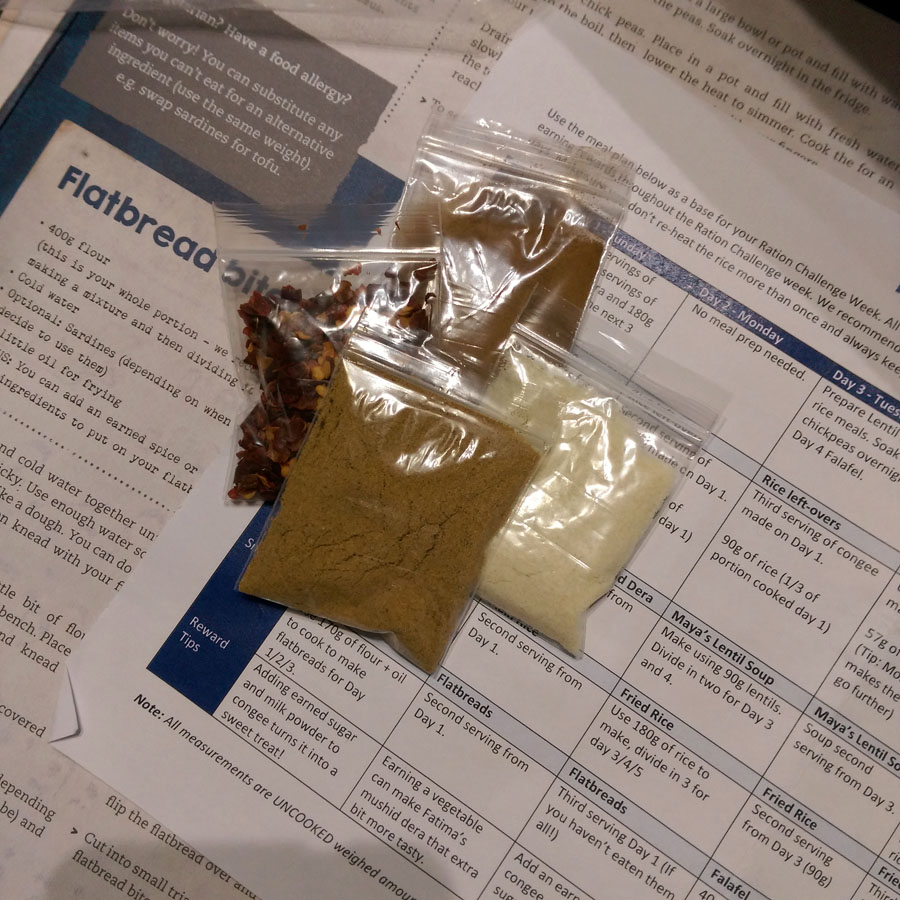 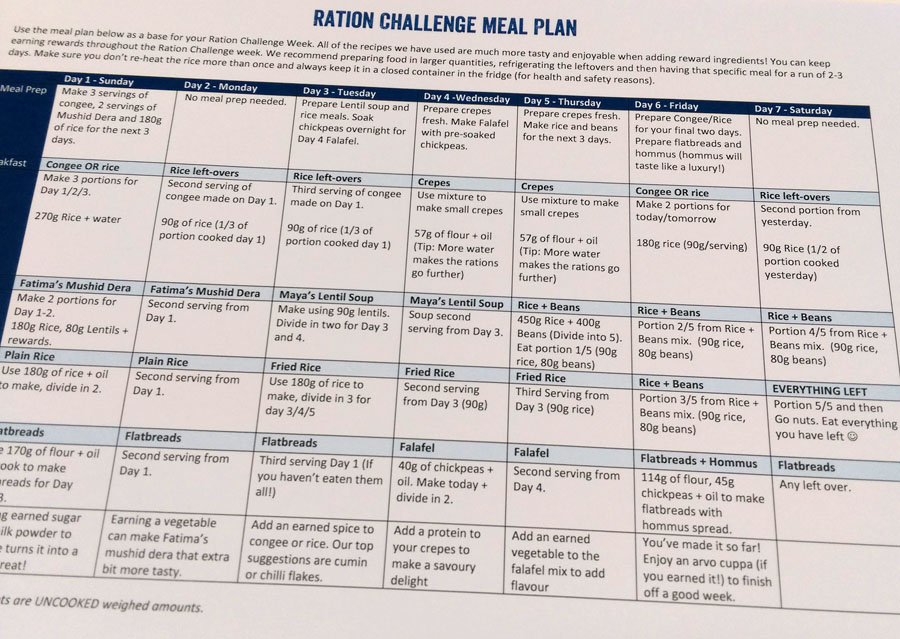 Unfortunately I have to work on Sunday, so on Saturday night I’m rushing around preparing food for the next few meals (can’t grab lunch on the go this week!). I make Mushid Dera (rice and lentils), congee (rice and water) and flatbreads. Because I’m terrible at making dough, I manage to add way too much water, so I scrap it and start again without thinking. The rice also starts sticking to the base of the pan, and I manage to save it without too much damage. It suddenly strikes me that if I were a refugee, that would be a day’s worth of meals gone. Burning food is an annoyance for us, but a disaster for them.

It’s Sunday and I have to go into work, which I think could be a good thing since I won’t be near my kitchen… but it turns out that my coworkers have decided to cook Korean barbecue meats on the sandwich press and it smells amazing. They borrow some of my cumin. Luckily when they were cooking I wasn’t too hungry, but near the end of the day the lingering scent is starting to make my stomach growl. I discover that sprinkling different spices over the Mushid Dera gives it a bit of variety. Luckily I get unlimited water, even though that’s not always the case in refugee camps. 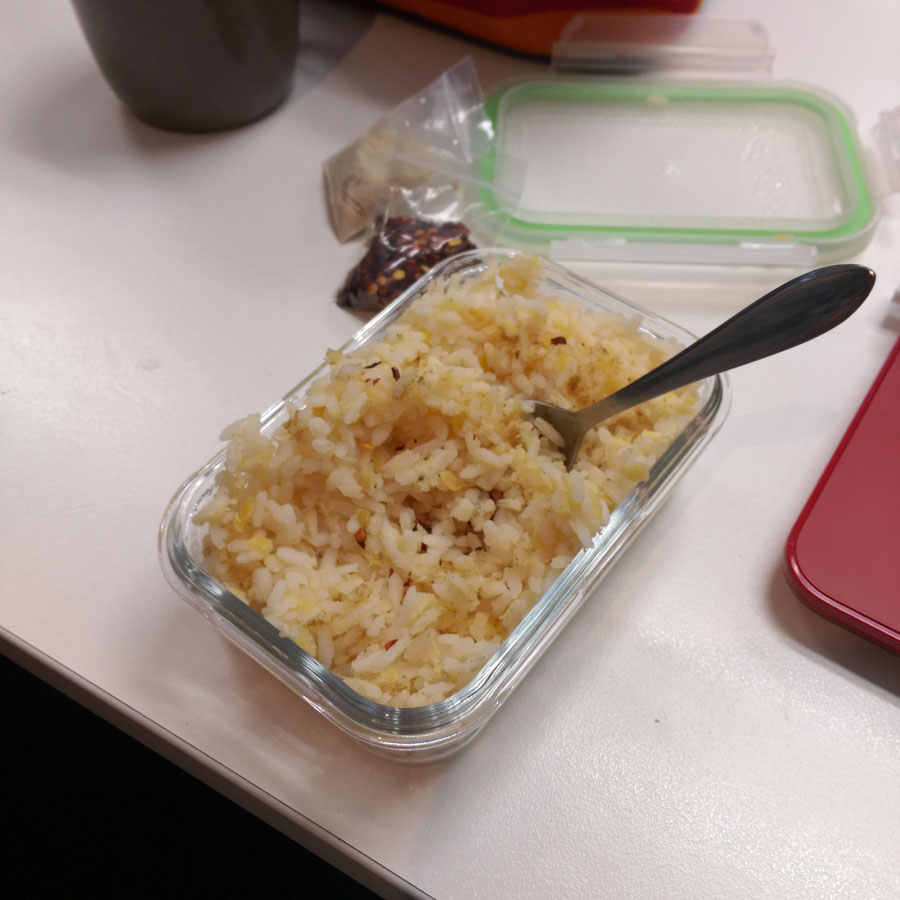 I pick up the remaining supplies on my way home, but can’t resist picking up some Easy Mac and shortbread for next week. I stash them in the back of my cupboard and try to forget about them.

It turns out I’m bad at cooking rice, so the congee didn’t have enough water and it’s turned into mushy rice overnight. Frying it dries it out a bit.

Unexpected discovery – fried rice mixed with a tiny spoonful of mashed up sardines is actually pretty tasty! I fry it so some of it goes brown and crispy, so the change is texture is quite exciting. I resolve to fry all my rice from now on…then remember there’s only 300 mL of oil, plus whatever’s in the sardine can. I save sardine oil fried rice for Friday, when I expect I’ll be struggling the most and will need a pick-me-up (sardine oil as a pick-me-up…sheesh).

I figured that Day 1 would be easiest, so I decided to save most of my bonuses for later. This meant that all I ate were carbs with spices and a miniscule amount of sardines.

I make a rice porridge with milk powder, a teaspoon of sugar and cinnamon for breakfast tomorrow, and taste-test a couple of spoonfuls for dessert. Unfortunately it still tastes like rice. 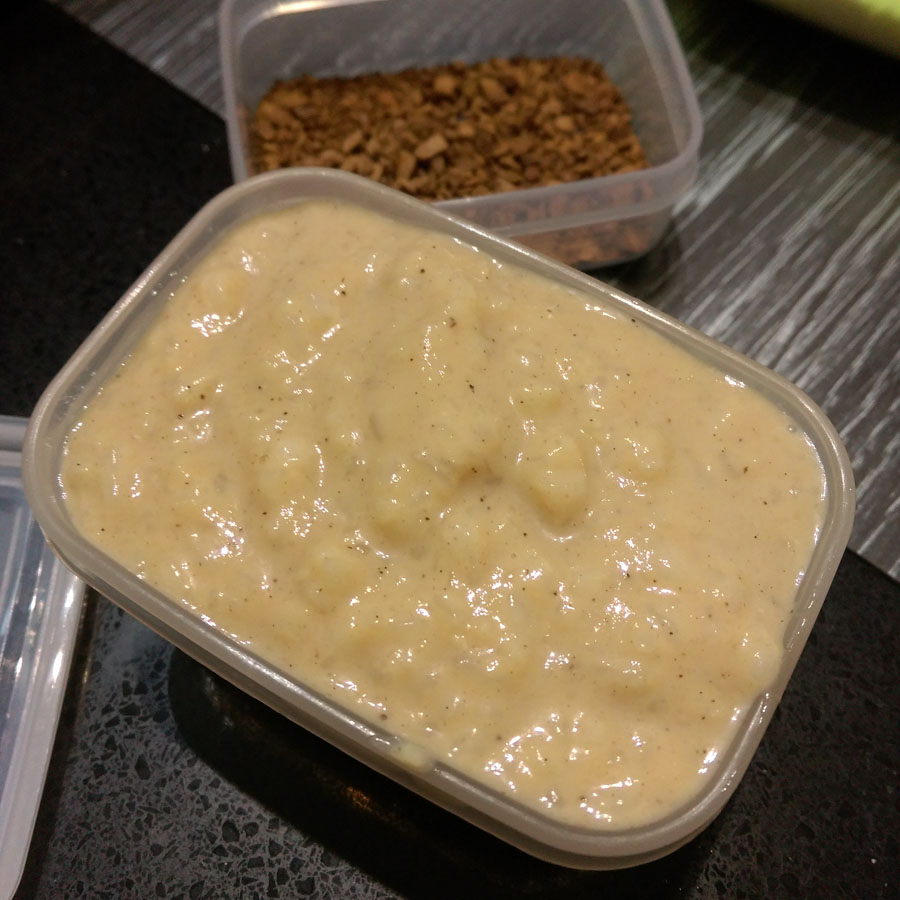 This is my day off work and I usually spend it rushing around trying to get blog stuff sorted for the week ahead. I’ve been planning a video on DIY sunscreen for a while so I work on the slides for that, and try really hard not to think about food. The coffee rice porridge is actually quite nice.

I get a phone call from the Ration Challenge congratulating me for doing so well which is lovely – plus they confirm that our team gets 8 teabags or 4 teaspoons of coffee EACH as our team reward! For lunch, I can’t really deal with rice and lentils again so I fry it up with oil which makes it delicious, but it’s gone much faster than I’d like. I’ve been contemplating starting on the frozen spinach, but realise what I really want is extra flavour, so I switch to onion instead. 170 g of onion turns out to be a whole brown onion which seems like way too much! I give half the onion to my teammates and mince the rest to dole out slowly over the rest of the challenge.

Back to work, and I have a dance performance that night, which sounds bad but it’s actually physically easier than a real class because the performance only lasts 5 minutes. However, I’m terrible at remembering choreography, and the hunger is making my brain feel a little cloudy (“rice brain” as the Ration Challenge info pack calls it). I’ve also been doing more dumb things:

The other big thing I’ve noticed is that while I feel full immediately after eating, I’m hungry again very very quickly. I think it’s the high GI – white rice spikes blood sugar very quickly, but it disappears quickly too. I’ve decided to do small frequent means to counteract that.

My boss sends me a news article about how a starvation diet can potentially starve cancer cells to make me feel better about being hungry.

The dance performance goes well – I’m actually quite weirdly energetic! I forget some choreography, which is pretty standard.

Surprisingly I’m not too sore from the performance last night despite the lack of extra protein, although I wake up with my stomach growling. It’s deadline day at work, and I still have 500 pages of material to proofread before we send it to the printer. I usually stress eat my way through this day but since that’s not an option, I blast through on caffeine from my tea bags alone, and divide up my food into little portions for eating every two hours.

I don’t feel too tired, but a few people at work comment that I’m less perky than usual.

I skip my usual lunchtime dance class and opt for a less intense stretch class instead. But this is enough to flatten me because…I get my period! Good timing, body. I’m suddenly tired and cranky and ready to snap at anyone and anything. I have to teach part of a class today and I’m all over the place.

To add to the list of dumb things I’ve done:

The trains stop due to a police operation and I miss my dance performance, which is probably for the best. I go home and open the fridge, only to discover that I’ve knocked the sardines over and all of the delicious sardine oil has leaked everywhere and I can’t use it for cooking anymore. I clean it up, eat some lentil soup, fry up some rice and feel sorry for myself. On the bright side, I discover that eating milk powder on its own is actually really tasty (I am a disgusting person).

I go a blog event tonight. These usually have delicious canapes and I’m dreading it, but strangely enough, while I mentally want the food, I don’t really crave it. It’s like I’ve forgotten what food tastes like. 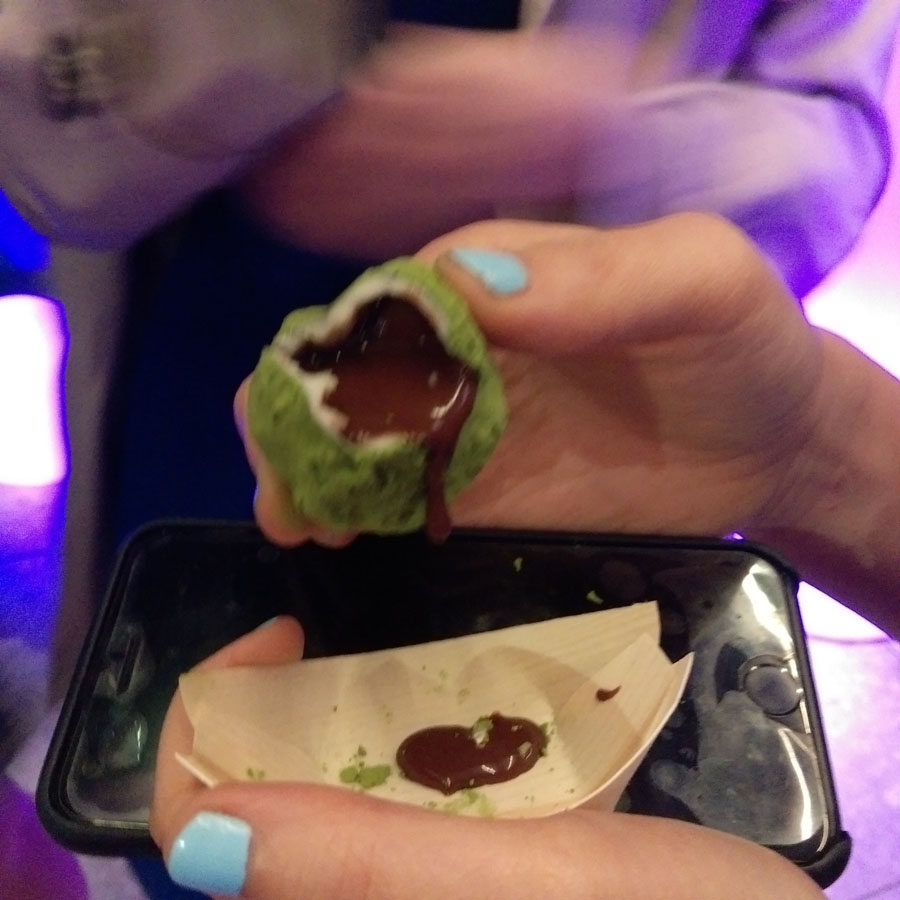 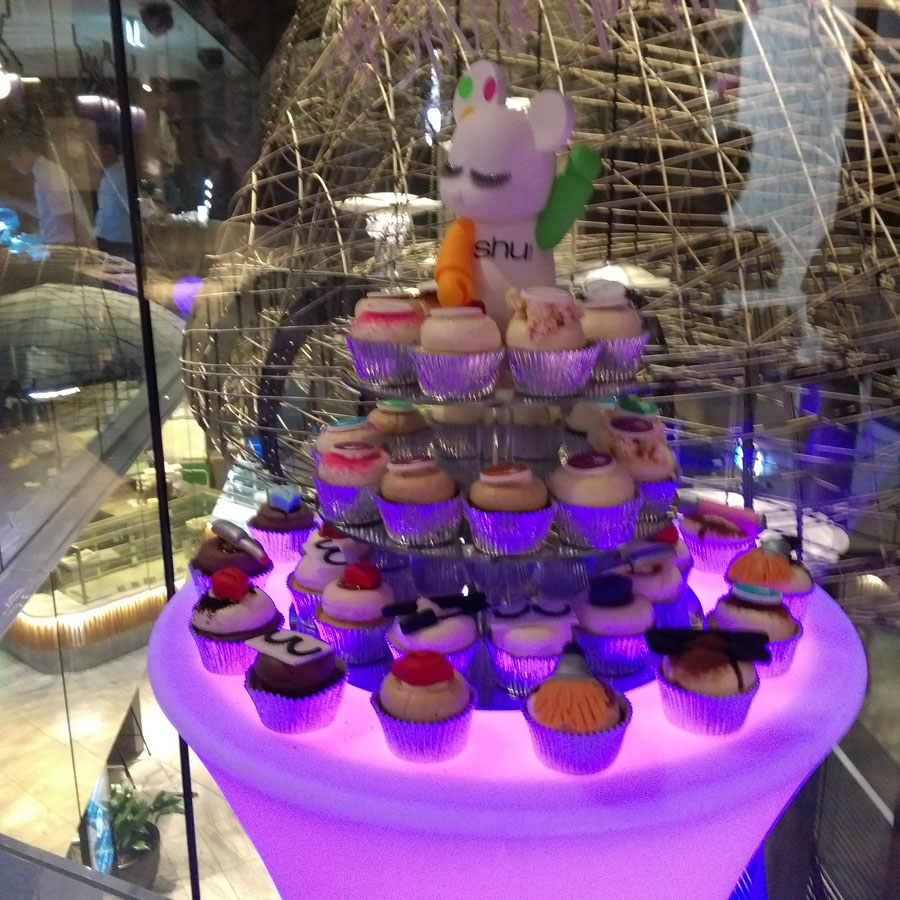 I drink a ton of sparkling water, and take home a cupcake for my Sunday post-ration feast. When I get home I’m tired and cranky enough to I scream at a particularly whiny cat, then feel really really guilty. I open the kidney beans, and to my surprise it tastes amazing. I cook up the kidney beans with rice and mince and onion and sardines, gobble it up, then cry a little as I’m going to sleep.

Friday! I’ve decided to take today off since I didn’t get a full weekend earlier this week. I vow to wake up early and get lots of stuff done, but instead I only manage to drag myself out of bed at 12 and waste a ton of time laying around doing nothing. My food today is rice and beans again, for lunch and dinner. The beans do add a lot to the rice – there’s extra flavour, and a different texture too.

I take my dinner in my lunch bag over to hang out at a friend’s house – I’m surprisingly still not craving food! I feel a lot better compare to yesterday. More milk powder for dessert certainly helps.

Final day! I have work, so afterwards I go to the supermarket and haul hard. I start piling up a tower of food on the kitchen counter to eat the next day: the cupcake, a box of shortbread cookies, a couple of mandarins, a bag of grapes, an avocado…

I must’ve gotten a bit too enthusiastic with my final few rounds of rice frying, because as I bite into a particularly crunchy piece of fried rice, I feel something funny in the back of my jaw…and then a piece of tooth comes out! An actual piece of tooth. I freak out and book an emergency dentist appointment for the next day and pack a cookie in my bag for later. I go to sleep thinking about root canals and how they cost thousands of dollars (luckily it turned out that I only needed a filling, which only cost me $42 thanks to health insurance!)

Thoughts on the Week

I’m really glad I took this challenge. I love a good challenge, and it was for a great cause – I’m so happy that I could shed some light on the refugee experience, and raise some much-needed money for them. It was very heartwarming to hear so much positive feedback from people when I told them I was doing the challenge. It was also really eye-opening to actually eat the same food as a refugee, and brought their experiences a bit closer to home! I’d highly recommend joining the challenge next year if you’re toying with the idea!

I hope you’ve been entertained by my struggles during the challenge! If you’d like to donate and haven’t already, there are still a few days left – my page is here.