My boyfriend isn’t usually interested in trying out beauty products… except this. He is an utter FIEND for massages and tickles (I think it’s mainly the undivided attention). I prefer the “dig your elbow into my back and leave it” school of massage, but he’s all about the touchy-feely. (I’ve been trying in vain to get him out of the habit of just turning his back on me when he wants a massage by responding with a firm ass grope. He’s learning.)

We’ve been using pure virgin coconut oil for a while, which smells like a delicious tropical holiday – but coconut oil is generally a solid at room temperature, and it’s a bit of a task scooping it out. Here’s where Lush’s massage bars come in handy – they’re like a block of soap and melt slowly when rubbed on skin, but not when being gently handled. 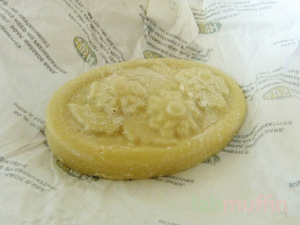 Lush has a range of different massage bars, including Wiccy Magic Muscles, which comes with a base of hard azuki beans (aka red beans) for a harder massage, and Hottie, which contains “warming” oils. The one I have, Friends With Benefits, smells like choc-orange.

How to use it: Rub it on the massagee’s skin until enough has melted for your liking. I broke it into quarters for easier handling, and I think I’ll be able to get 15 half-hour back massages on a 6 foot tall boy out of one bar.

Pros
– Handy, no greasy bottle caps to untwist, no leakage
– No wastage, “dispenses” exactly as much as you want, no dregs at the bottom of the bottle
– No excess packaging!
– Lovely moisturising emollients which sink into skin – cocoa and shea butters

Cons
– Takes longer to oil up than liquids
– Absorbs into hands/skin quickly, you have to keep adding more to keep it slippery
– Cocoa butter is comedogenic, and is the first ingredient – while it makes the bar nice and hard, it can also get nice and hard in your pores
– The scent doesn’t really do it for me

Overall, I’m quite impressed – it’s very handy for a short massage, but adding a splash of grapeseed oil would make it better for a hardcore knot-banishing session. It’s very good as a general body moisturiser, an a sneaky way to get the boyfriend to moisturise!

I’d love to try out some of the other massage bar offerings, such as Strawberry Feels Forever, which is supposed to smell like marshmallows – yum! (Or perhaps formulate my own bar… hmm.)

What are your favourite massage products?

Friends With Benefits retails for $13.95/65 g. A sample was given to me when I bought another item. 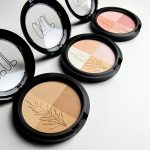 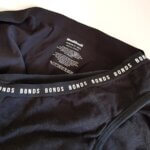 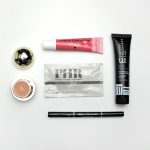 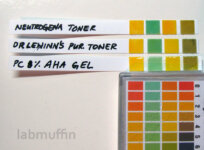