The nerdy nail girls out there have probably already bagged themselves a few thermal polishes, which are super popular with indie polish makers at the moment. These cool polishes change colour in response to heat and cold. I’ve swatched a few in the past and occupied myself for a few too many hours with bits of ice and hairdryers – but what’s the magic behind how they work? Well, it’s surprisingly complex for something as simple as nail polish and t-shirts that show how warm your armpits are. Hopefully I can break it down for you!

Thermal polishes are technically known as thermochromic, which means they change colour (“chromic”) when they experience changes in temperature (“thermo”). As you may have guessed, the same technology is used in hypercolour shirts, and in drink cans which change colour when they’re cool. (A slightly different, more precise technology is used in thermal temperature strips, where the colour change range is more important, and a greater range of colours is possible.)

These temperature-controlled products use pigments known as leuco dyes. These clever systems consist of tiny little spheres called microcapsules, which are about 1 to 10 microns across (that’s between one thousandth and one hundredth of a millimetre).

Inside the spheres, there’s a carefully controlled ratio of three types of chemicals:

1. Dye – This is a coloured chemical which can undergo a reversible reaction, combining with a H+ ion to become colourless.

2. Weak acid – This is a colourless chemical, which can also undergo a reversible reaction, combining with the H+ ion.

So there are these two components fighting over who gets the H+ (there aren’t enough for both of them!). 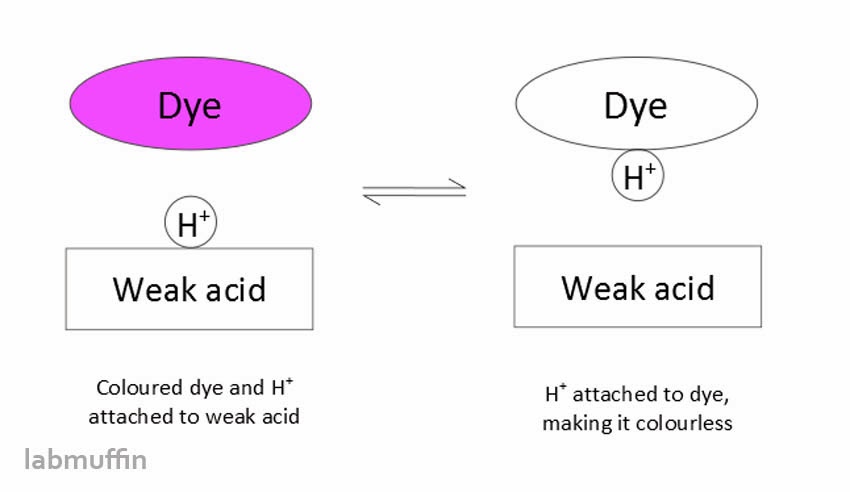 Under some conditions, the H+ is attached to the weak acid, which means the dye is coloured, and the whole situation looks coloured (the situation on the left hand side of the diagram).

Under other conditions, the H+ is attached to the dye, making it colourless, and since the dye’s the only component which has colour, then the whole situation looks colourless and see-through (the situation on the right hand side).

3. Solvent – As you might’ve guessed, it’s the third component which controls which situation occurs! The third component is a solvent which has a melting point (when it changes from solid to liquid, like ice melting into water) around the temperature at which you want the colour to change.

If you’re interested in learning more, here are some handy links: