I’ve always wanted to do controlled comparisons of the eye makeup longevity, but there are lots of issues with actually conducting them on the eyes from a scientific perspective.

First off, notice how one eye is usually harder to do than the other? That’s because most people only use their dominant hand, and therefore applying makeup differently from one eye to the other. Even if you angle your brush similarly on the bad side to how you’d do it on the good, the amount and direction of pressure will be completely different. One way to get around this problem is to do a crossover experiment – first put product A on your left eye and product B on your right, then the next day, test product A on your right eye and B on your left, and see if you get the same result for both days.

But then you run into the problem of whether you treated your eyes the same on both days – was the weather completely different? Did you sweat more on one day? Did you wipe some product off one eye when you sneezed? Did you stretch out one eye when you propped your head on your hand? In that case, the more times you repeat the experiment, the less of an impact those chance influences will have.

And if you want to test out more products, then it’s even more complicated – if you had 4 products, you can’t really test them all at the same time, since different areas of your eye have different moisture and oil levels, and some parts are wrinklier than others. So you’d have to compare two products at once with crossovers – if you compare A with B, B with C and C with D, that’s 6 days you’ll have to find with similar weather and routine, and you’d have to take care to treat your eyes the same. If you wanted to repeat the experiment to check if your conclusion wasn’t based on a random factor, you’d need 12, 18, 24 days…

What scientists do when testing something directly is too difficult is to test it out on a model. You want a model that’s as close to the real thing as possible so your results are valid.

So here’s my experimental model for testing 4 different concealers for creasing resistance on my oily skin. I’ve complained before about this (often on Twitter) – everything creases under my eyes! I used my fingers to simulate the under eye area. I picked them because:

– my fingers are full of creases, which would exaggerate results and give me an answer in a shorter amount of time
– there’s lots of surface area, meaning it should be easier to tell between natural wearing off and an accidental scratch
– it’s pretty easy to make sure all four fingers experience a similar amount of movement, the same environment, etc. 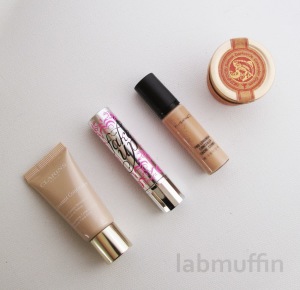 – Clarins Instant Concealer in Light* – this liquid concealer applies beautifully to give a natural finish, but I’ve noticed it creasing in my undereye area.

– Benefit Fake Up in Light* – this is a very handy stick with the pigment in the centre, surrounded by a ring of moisturising balm. Again, I’ve noticed it creasing a lot on me.

– MAC Pro Longwear Concealer in NC20 – this is my sister’s favourite concealer, a liquid in a pump bottle. I’ve tested it on my eyes before and it doesn’t seem to settle much in the fine lines under my eyes.

– Skinfood Salmon Dark Circle Concealer in Normal – this is a smooth cream in a jar. I used to use this on a daily basis, but I’ve been distracted by all the other concealers I wanted to try! It creases a bit too.

To make the skin on my fingers a bit more like the skin in my under eye area, I rubbed my clean hand on my face to pick up some of the oils. I then took a bit of each concealer and dabbed it along each finger, like I would under my eyes.

Next, I set the concealer in the area around the bottom knuckle with Mary Kay Translucent Loose Powder. I waited 15 minutes for the concealer to equilibrate on my skin (integrate with all the oils and sink in), then took the “Before” photos. 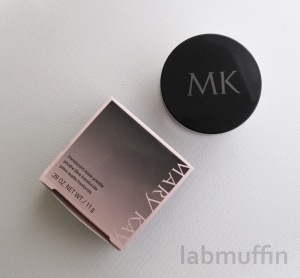 Then I waited around for another 1 hr 15 min with concealer fingers. I gently curled and uncurled my fingers uniformally every once in a while, making sure each finger bent to a similar extent. At the end of the total time of 1.5 hrs, I took the “After” photos.

I washed my hand thoroughly, then repeated the whole thing again, but changing up which finger got which concealer.

The results of the second experiment looked the same as the first, so I’ve only put the first set here. All the results line up with my past experiences using the concealers under my eyes. The top unpowdered knuckles all fared worse than the bottom powdered knuckles. 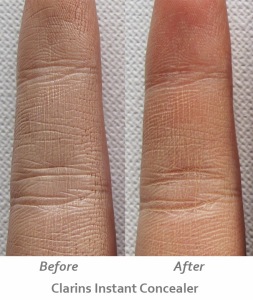 Clarins Instant Concealer is pretty creasy in the photo of my finger, but on my undereye it’s actually not so obvious – there are lots of shimmery particles in the concealer that make the lines less distinct. 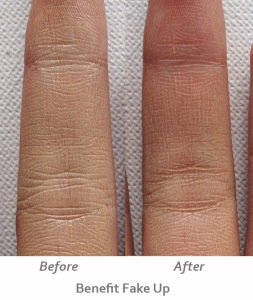 Benefit Fake Up is crease central! I’ve heard that this is amazing for not creasing on dry skinned gals, but nope, not for me. I think the moisturising balm makes the pigment more mobile on my skin, helping it to run into the cracks. 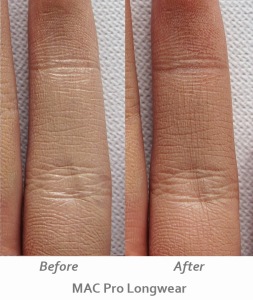 Mac Pro Longwear is the least creasy of the concealers I trialled. Almost no creases visible. 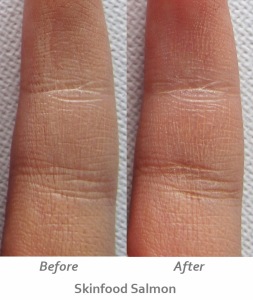 Lastly, here’s a comparison of the coverage of all the concealers I tried using my black paper test. They’re all quite buildable, so coverage isn’t that big a deal, but they’re all on the high end of the scale.

I think my fingers were quite successful in simulating the creasing of the concealers in my undereye area, since the results shown here were similar to what happened when I used them on my undereye. On an oily undereye area, out of the 4, MAC Pro Longwear concealer wins – I need to go out and buy me some!

Products marked * provided for editorial consideration, which did not affect my opinion. For more information, see Disclosure Policy.