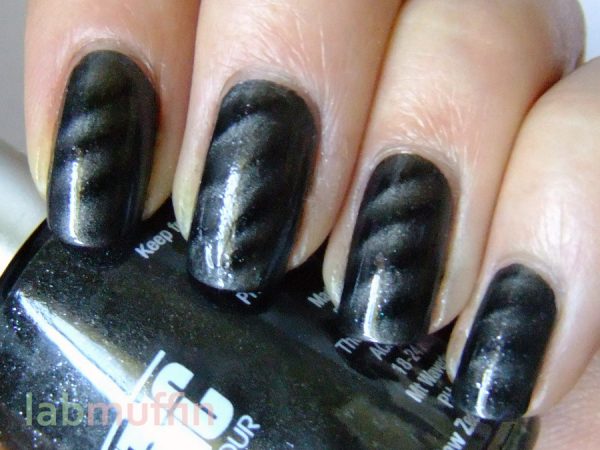 Cheap-but-awesome Australian brand ulta3 have just released a range of magnetic polishes! There are 6 polishes – 3 are neutrals, and three are in the pink/red/purple family. Alanna found them in the city on Thursday, so I picked 3 up that evening. They’re $5 each, and each bottle comes with a diagonal magnet. 4 additional magnets are available – star, narrow vertical stripes, chevron and another diagonal one that looks very similar to the first one to me. The extra magnets are $3 each. I was super excited since they’re the cheapest magnetics I’ve found either in stores or online – if you assume the magnet costs $3, that makes each polish only $2! But as the same magnet comes with each polish, you end up with a bunch of exactly the same magnet, which isn’t very useful.

I’ve only had time to try one on so far – Spellbound, which is charcoal grey in the bottle, but turns black and silver after you stick a magnet over it. This is what it looks like on the nail, using a magnet from eBay: 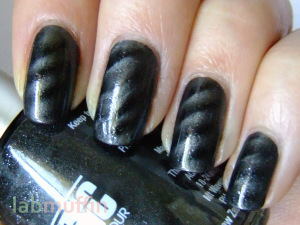 Here are some nail wheel swatches using a bunch of different magnets: 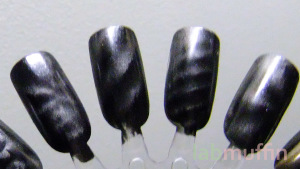 L to R: ulta3 star, ulta3 diagonal (comes with polish), eBay diagonal, eBay star but accidentally off-centre (looks like this, although I bought it from another seller)

Unfortunately the ulta3 star magnet looks kind of squashed together, like someone chopped out the middle portion.

The main complaint I have is that even the slightest topcoat drag messes up the pattern, which I think is probably an issue with all magnetics. It tends to thicken too quickly on the brush, which makes it difficult to apply thinly and evenly. Also, the colour range is pretty limited – the pink/purple/red all are pretty similar, and there isn’t a blue/green option.

Hopefully I’ll have the swatches of the other two I bought soon!

What do you think? Are magnetics over? Or are they still awesome? 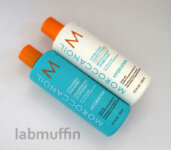 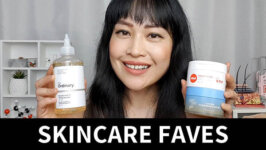 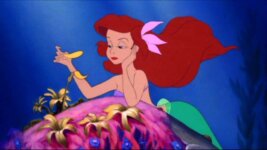 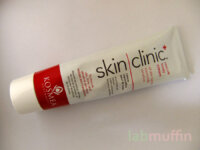