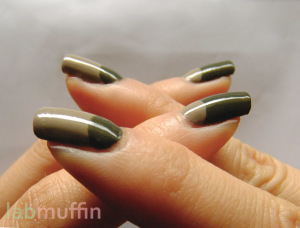 I was feeling uninspired with my Autumn manis (but with a million ideas for Spring manis… argh reverse seasons) so I was really excited when I came across this look: 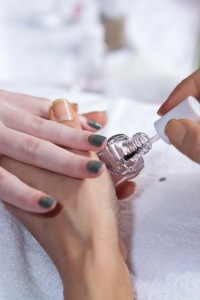 It’s the mani the models rocked for the Michael Lo Sordo SS 12/13 show, done using essie Sew Psyched and Case Study. Instant love! Gorgeously sophisticated and so, so chic, much more interesting than all the other nail looks I’ve seen so far from Mercedes-Benz Fashion Week Australia (one colour cremes, meh). And such perfect Autumn colours! (Strange, considering it’s a SS collection…) SWOON. So of course I had to recreate it on my nails!

I don’t own Sew Psyched, so I used a franken I made using China Glaze Wagon Wheel and ulta3 Lily White. I wanted something last winter that had the creme-with-subtle-shimmer look that so many Chanel polishes have. Unfortunately, the shimmer sinks pretty badly in my franken and largely disappears on the nail (except in full midday sun), I probably would’ve been better off buying Sew Psyched, if only it had been on my radar back then! 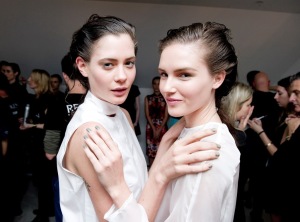 In the Michael Lo Sordo show, half the models had green nails with beige half-moons, and the other models had the reverse colours. So I did reversed colours on my hands – Case Study half moons over franken on the left, franken half moons on the right. 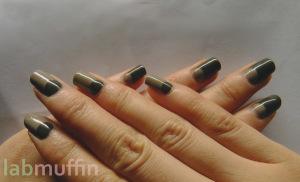 These double-hand photos took considerable 733+ 5k177z – I set up the timer then held the camera between my knees, like a super polish-photographer ninja. 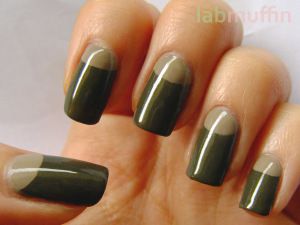 Right hand (apologies for bad clean-up and angle, this hand isn’t used to being in the limelight!): 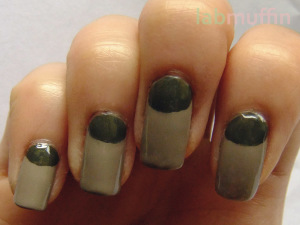 I like the left hand better with my skin!

What do you think? Is this a SS or AW/FW look?

« Review: Kosmea Daily Exfoliant
How Can I Get Rid of Stretch Marks? »