Do these sorts of images look familiar?

The general gist of the message is this:

Natural = safe, healthy, normal and the way things are supposed to be

This logic really appeals on a gut level, doesn’t it? But in reality, it’s untrue and misleading. Here’s why:

“Chemical-free” is not a thing

The word “chemical” might make you think of scientists in white lab coats making potent concoctions in test tubes. But that’s not entirely correct. Yes, those things are chemicals… but so are most other things. Almost everything is made of chemicals! That includes the water you drink, the oxygen you breathe, everything you eat, supplements you take, the cat you cuddle, and yes, YOU. Humans are made of millions of chemicals. The purest water collected from a Himalayan glacier is 100% chemicals (specifically, dihydrogen monoxide).

Here are the ingredients of all-natural blueberries: 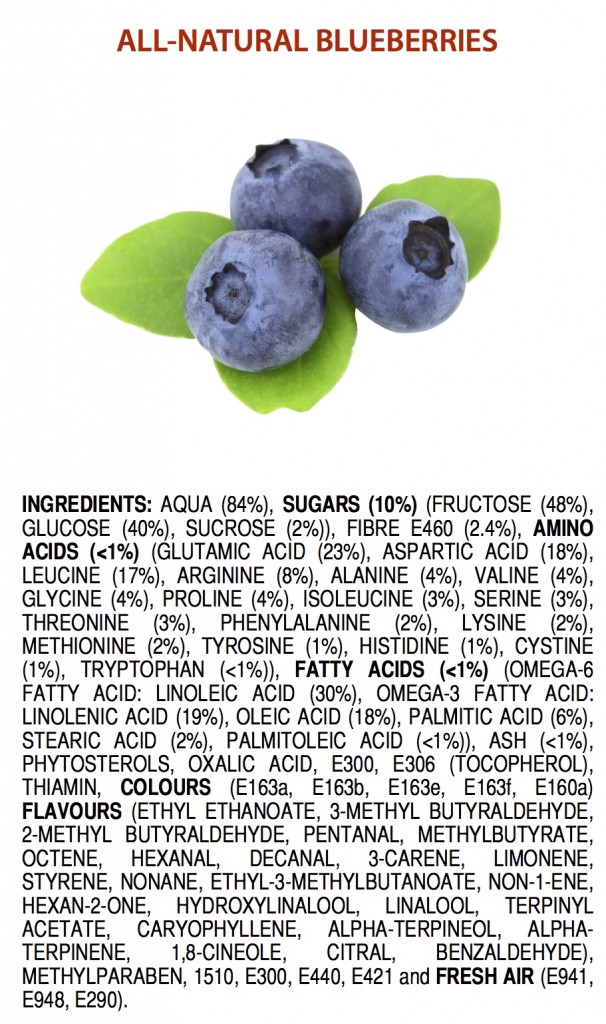 Scroll back up and look at that blueberry ingredient list again. When was the last time you saw a non-natural product with that long an ingredients list? Check out the ingredients list for Vaseline, a petroleum derivative: 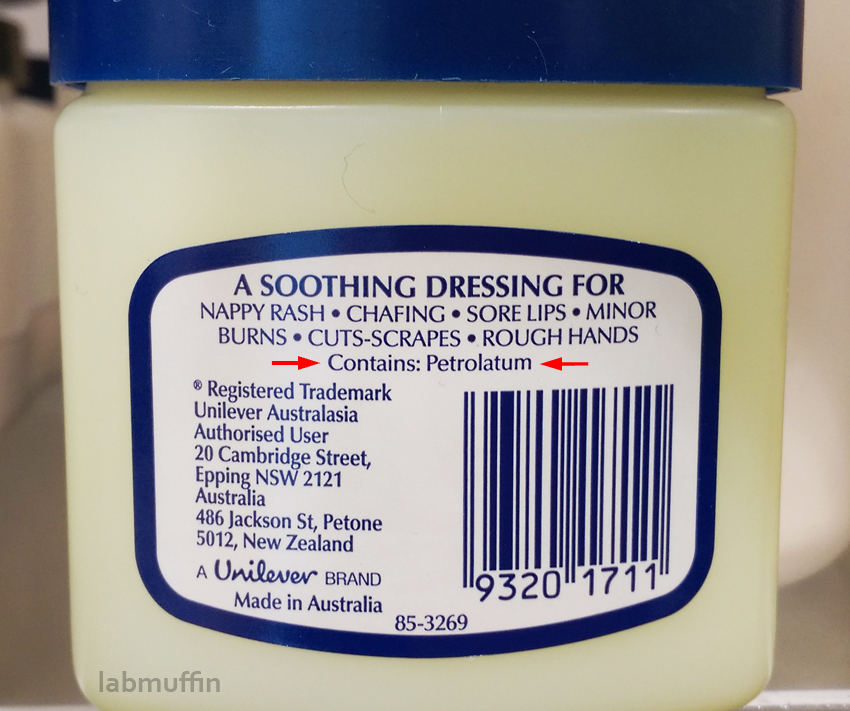 Surprisingly short! (OK, white petrolatum is actually a mixture of a bunch of chemicals, but they’re really similar chemicals, much more similar than the cocktail in an apple.) The thing you mightn’t expect about natural and synthetic things is that almost everything in nature exists as a mixture of chemicals, but synthetic chemicals tend to be purer. It might make you feel better to see “blueberry” on a label rather than “3-methyl butyraldehyde”, but the truth is that a sample of the latter would only contain one of the many chemicals found in a blueberry. It’s just scarier because it isn’t hidden in a nice familiar word like “blueberry”. Yep – a lot of the whole anti-chemical feeling is just misapplied “stranger danger”!

Where something comes from doesn’t tell you much

Let’s think about Vaseline again. It’s petroleum jelly, which is a byproduct of petroleum. Doesn’t that freak you out? It’s like rubbing crude oil on your face!

Luckily, it really isn’t. Humans have gotten really good at separating the mixtures found in nature, so good that we can take all of the petrol chemicals out of petroleum jelly, making it entirely safe. It’s just like castor oil – while the castor bean is poisonous and contains ricin (one of the most toxic chemicals on earth) the oil is fine – though if you drink a lot of it, you’ll poop hard.

Another tempting myth is that natural chemicals are safer than synthetic chemicals. The truth? It’s a lot less black-and-white. Nature makes some nasty stuff. As well as ricin, other toxins like botulinum toxin, snake venom, arsenic and asbestos are all-natural. Botulinum toxin (produced by naturally occurring bacteria) is actually about a hundred thousand times more toxic than the most poisonous synthetic chemical, dioxin.

What about plants then? They’re more commonly found in skincare – surely they’re a bit nicer?

Again, no! Plants are stuck where they are – they can’t run away from hungry animals. That’s why many plants have actually developed sophisticated toxins to ward off any uninvited encroachers. Chemicals in plants like monkshood, hemlock, belladonna, giant hogweed and poison ivy will give you nasty blistering skin reactions on contact. 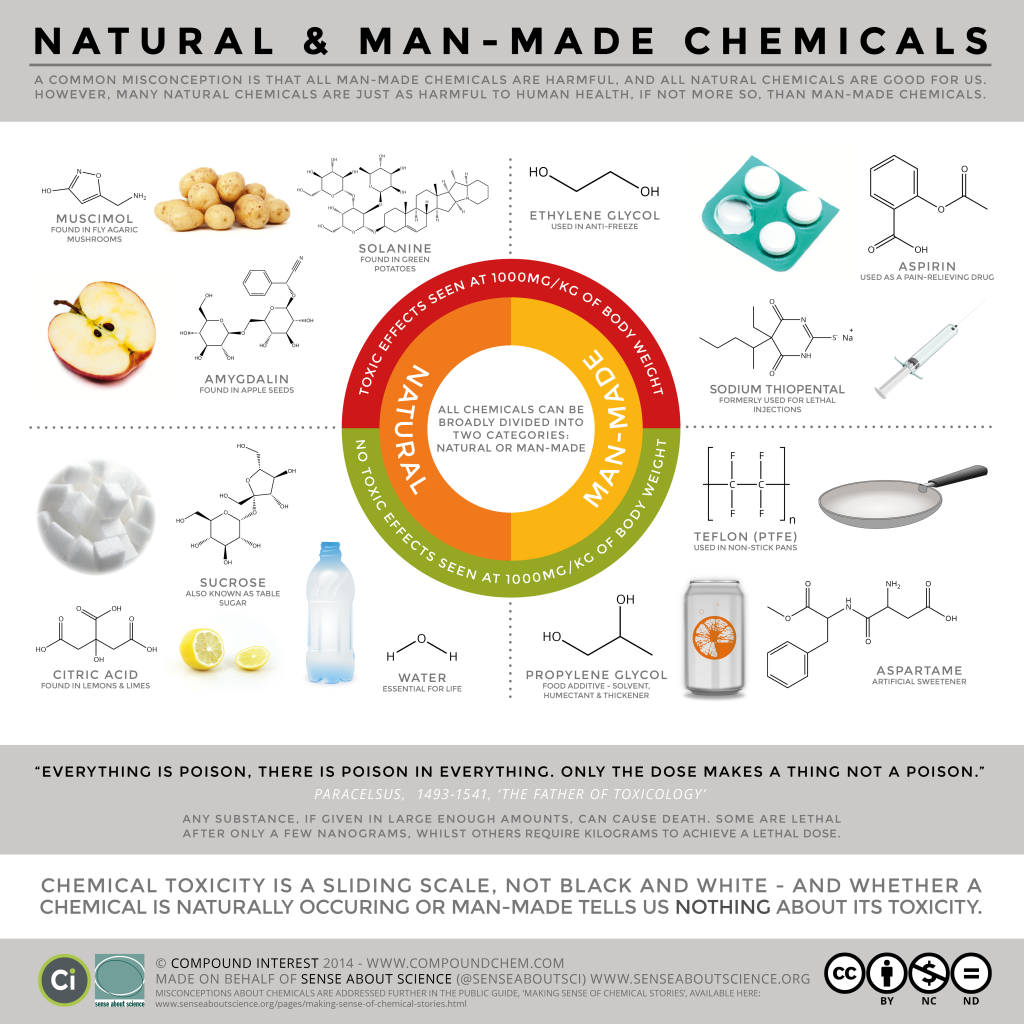 Nature does not “know best” when it comes to skincare

Nature is pretty awesome. The way ecosystems work is pretty damn cool – we have over 1000 bacterial species in our gut which help us digest food, and make essential nutrients like vitamins B and K.

But it doesn’t quite work that way when it comes to treating human diseases and conditions. Mother Nature does not care if we live healthy lives and have nice skin. Unlike how we and our gut flora evolved to develop a win-win relationship, there’s no reason why a random plant would evolve to benefit human skin. Out of literally trillions of chemicals that exist in nature, only a handful have been found to be useful in medicine.

Natural extracts also have another disadvantage: there is a lot of variation. Different apple varieties, for example, taste different – even two apples of the same variety can taste different. This is because they contain different chemicals – this means no two “apple extracts” will be identical, and can contain unpredictable impurities. Synthetic chemicals, on the other hand, are easier to control, which means more reliable effects on your skin.

Even though going “all-natural” might be tempting on a gut level, the reality is way more complicated than that! Natural and synthetic things both have their advantage and disadvantages, and there are no blanket rules for which chemicals are safe. As with all things skincare, your mileage may vary – use whatever works best for your skin, regardless of whether it’s natural or not.

This post originally appeared on the Skincare Addiction blog.