Alpha and beta hydroxy acids are chemical exfoliants which are in many of our cosmetic products… what’s the difference between them, and which one should you use for what?

Here are the structures of some AHAs, with the bit that makes them an AHA coloured purple: 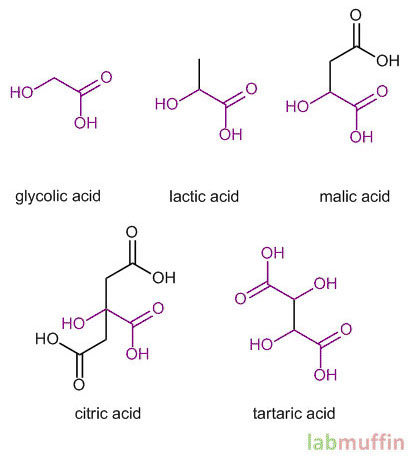 And here are some BHAs, with the BHA part purple1:

You may have noticed that some of the AHAs have a BHA portion in them too, such as citric acid and malic acid – the reason they’re still considered AHAs is that they act more like AHAs, but sometimes (rarely) they’re listed as BHAs. Salicylic acid is the only BHA that’s found commonly in skincare and cosmetic products, and when most articles are discussing BHAs, they specifically mean salicylic acid.

The stratum corneum is the protective layer on the surface of the skin, made mainly of dead skin cells and keratin – although it’s necessary because it protects the skin, if it’s too thick, it can look dull and uneven. Both AHAs and BHAs can penetrate the skin surface and detach more dead skin cells from the stratum corneum than physical exfoliants such as scrubbing beads. They can improve the appearance of skin that’s dull or hyperpigmented due to sun damage or other skin build-up, resurface dry skin, and even reduce the appearance of wrinkles and smooth the skin. AHAs and BHAs can also stimulate cell renewal, but it’s currently unclear why. This can lead to plumper skin with better texture.

The best AHAs for penetration are glycolic and lactic acid – because they’re small, they are better at penetrating the skin surface. Because of all the Os on the structures, AHAs are also humectants and can help moisturise the skin (see this moisturiser blog post for more about humectants and other moisturising goodness!). However, because it’s oil soluble, salicylic acid can also penetrate into pores which are clogged with oily cells and sebum.

So if your skin is on the dry side, AHAs might be more appropriate, but if you have problems with clogged pores, BHA would be your best bet!

Despite all their benefits, AHAs and BHAs can have unpleasant side effects too, such as making skin more sensitive to light after treatment, irritation and burning.

D Saint-Léger, J-L Lévêque and M Verschoore, The use of hydroxy acids on the skin: characteristics of C8-lipohydroxy acid. J Cosmet Dermatol 2007, 6, 59.