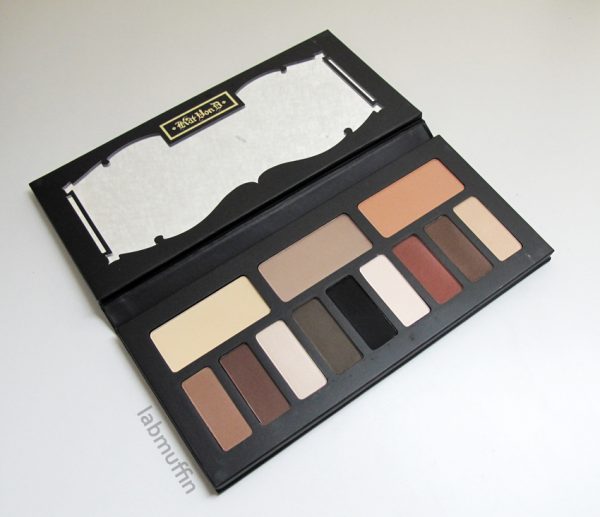 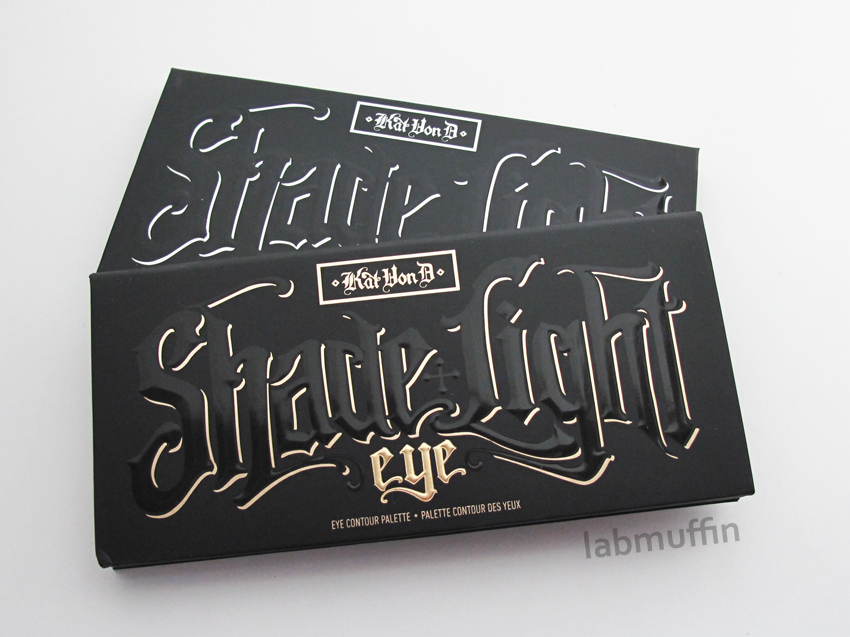 Since Sephora opened in Australia, I’ve finally been able to see so many fabled products in person, including the Kat Von D range. I’m reviewing the new Shade + Light Eye Palette today – it’s $46 USD in the US and $65 AUD here, which isn’t much of a mark-up at all ($46 USD = $58.8 AUD at the moment). Well done Sephora!

The concept of the palette is that you can use the colours to create highlights and shadows to contour your eyes – like face contouring gone hardcore. There’s a handy step-by-step guide included with the palette which shows you how to define and lift your eyes for natural and smoky looks, as well as narrow and widen your eyes. In theory this sounds great, but in practice I found it tricky to keep my eyes looking natural, and when I did get them kind of right it just looked weird at the wrong angles (much like normal contouring!) so I’ve just been using them as regular eyeshadows. 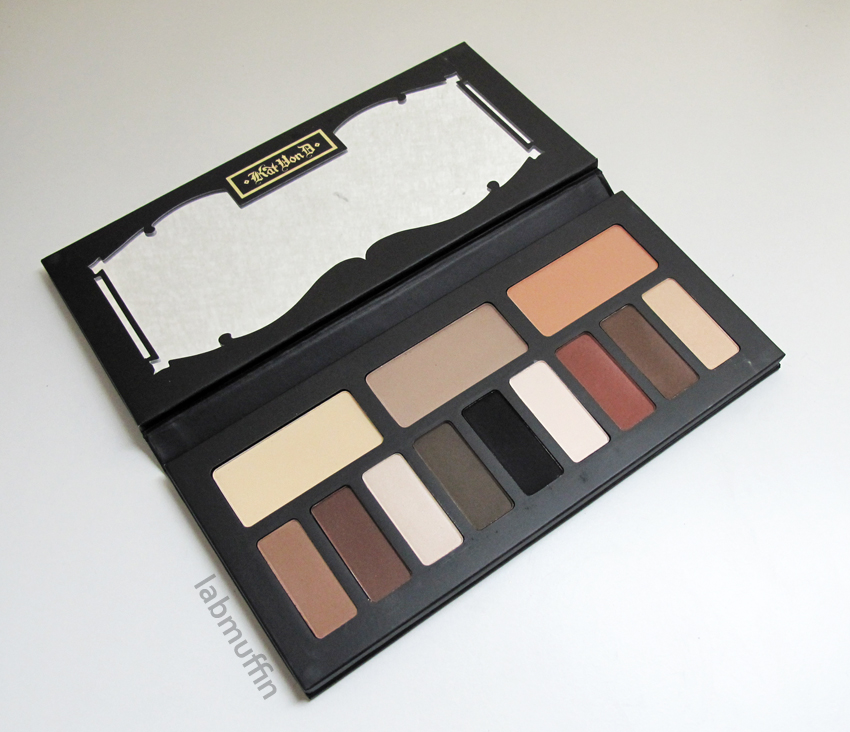 The Shade + Light Eye palette consists of three quads: a neutral, a cool and a warm quad. Each quad has two light shades (with names that start with “L”) and two dark shades (with names that start with “S”). One light shade in each palette is designed to be used as a base, so it’s twice the size of the others (0.08 oz vs 0.04 oz) – which is a fantastic idea, because there are way too many palettes in my hoard where I’ve plowed through the medium colour while barely touching the dark and light shades. Under the base shade in each quad, there’s a contouring, defining and highlighting shades. The arrangement is handy, although most of the shades are versatile enough that they can be used on cool and warm toned people.

In general, the shades are all very pigmented, and blend out pretty well – there aren’t any flops in this palette formula-wise, though the darker shades tend to have more fallout and are unsurprisingly harder to blend. They’re long-wearing over primer, and don’t fade during the day. 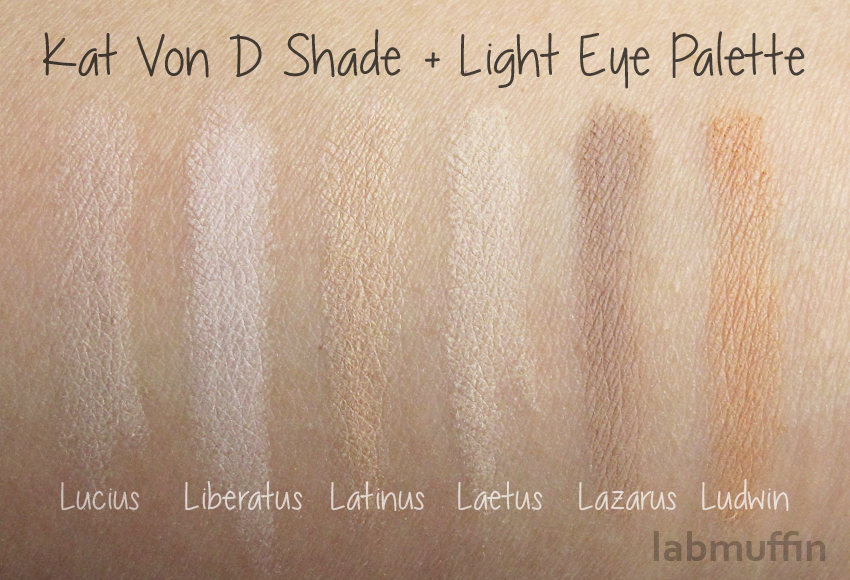 Lucius (neutral highlight) – described as soft beige. It’s a pale beige with a gorgeously creamy, blendable texture and a slight sheen. On my NC25 skin, it’s a nice bright highlight.

Liberatus (cool highlight) – describee as pinkish ivory. It’s a very pale white with a slight pink tinge – too pale for me to use for everyday neutral eye make-up. I found it quite powdery, and took a bit of work to blend out.

Latinus (warm highlight) – described as golden bisque. This is a warm yellow beige with the same creamy texture and sheen as Lucius. On my skin it blends out beautifully as a subtle glowy highlight. I’ve been using it in my undereye area as well.

Laetus (neutral base) – described as creamy nude. Laetus is like a slightly cooler, matter version of Latinus. It’s a little more powdery but still blends well. On my skin it’s a bit too light as a base shade.

Lazarus (cool base) – described as cool taupe. It’s a matte mushroomy grey taupe, and my favourite base shade although I’m pretty warm. It blends well and has fantastic colour payoff.

Ludwin (warm base) – described as peachy bronze. This is a pale orangey brown with a slight sheen which blends out prettily, but this colour looks super blah on me – it kind of makes my skin look kind of irritated and unnatural. 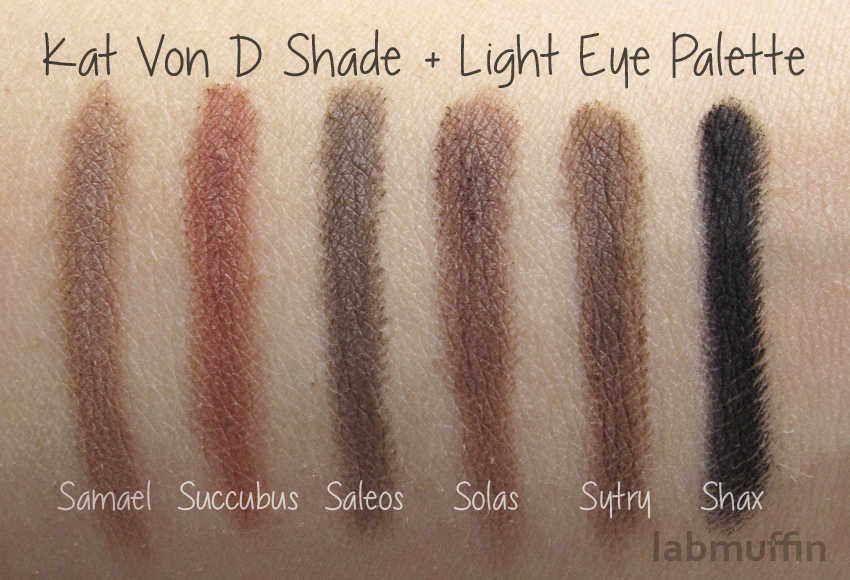 Samael (neutral contour) – described as dusty fawn. It’s a medium grey-tinged brown with a tiny bit of satiny sheen. I really like this shade, but unfortunately it pills up a bit and doesn’t blend as smoothly as some of the other shades in this palette.

Succubus (warm contour) – described as rich rust. It’s a deep terracotta colour with a super subtle sheen, and blends well but the colour doesn’t suit me much.

Saleos (cool contour) – described as smoky brown. This is a matte dark grey-brown, which took a bit of work to blend.

Solas (neutral define) – espresso brown. This is a matte coffee-bean brown shade. Like the other deep neutral shade, there’s a bit of pilly fallout and take a little work to blend.

Shax (cool define) – described as jet black. It’s matte black, and not super opaque, and a bit tricky to blend.

Sytry (warm define) – described as chocolate brown. I think this is actually a bit cooler than Solas from the neutral quad – I love this shade! It’s also more blendable and less powdery.

So far, I’ve been using the heck out of Lucius, Lazarus and Sytry with my everyday eye looks… which are from three different quads, so don’t take the classifications too seriously!

The palette comes housed in a cardboard-covered-in-satin-wrapping-paper affair held closed by hidden magnets, like many other mid-range palettes these days – I’m not a huge fan, as I’ve found that the corners get dented easily and the palette starts looking sad pretty quickly, but I’ve accepted that it’s what’s happening and there ain’t anything I can do about it. The logo on the front is Gothic calligraphy hand-designed by Miss Von D herself, which looks fantastically cool. I really like the mirror on the inside – it’s a nice wide mirror which lets you see both your eyes very easily, with pretty swirly cutouts.

This palette is one of the few fully matte nude/neutral palettes out there, and comes with a wide range of shades that will suit most people. The price is really reasonable, especially for the Australian market – a single mono 0.05 oz Revlon eyeshadow is $9.95, for instance, which would make the same weight of Revlon shadow $119.50. I’m a believer!

This palette was provided for review, which did not affect my opinion. For more information, see Disclosure Policy. 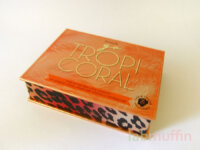 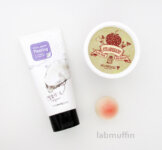 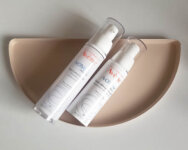