I’ve had some people ask me how the Panasonic Nanoe Hairdryer prevents frizz while adding water to the hair. I tried to explain it in an Instagram post, but then I realised that I needed more diagrams and space to explain it properly, so here it is!

What holds hair in shape?

Hair is mostly made up of a tough, fibrous protein called keratin. As well as making hair strong, it’s also important in giving hair its macroscopic structure: that is, the shape of a hair strand that you can see, whether it’s straight, wavy, curly, kinky.

By default, a protein is made of a long, straight chain of many amino acids joined together, called a peptide (or polypeptide): 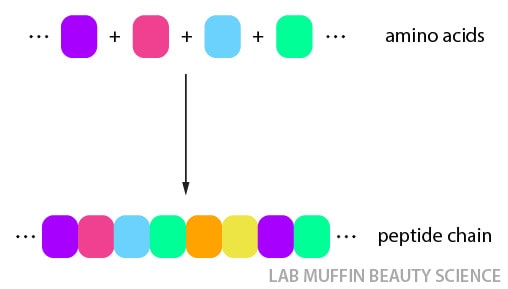 But interactions between different areas on a protein strand will fold a protein into a particular shape, much like gluing two sections of a single piece of string together.

These interactions can also occur between two different strands of protein next to each other.

There are four major types of bonding interactions that occur in hair proteins. Very briefly, in rough order of decreasing strength:

Disulfide bonds: These are permanent covalent bonds between sulfur atoms. In hair, the only amino acid that has sulfur is cysteine. (Side note: the sulfur also causes the pungent smell when hair burns.) 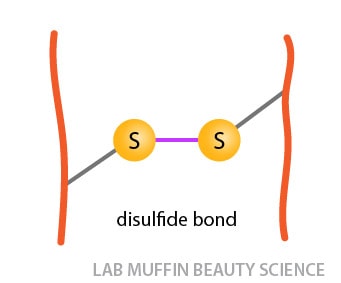 Ionic bonds (also called salt linkages): These are attractions between permanent positive and negative charges between the side chains of certain amino acids. 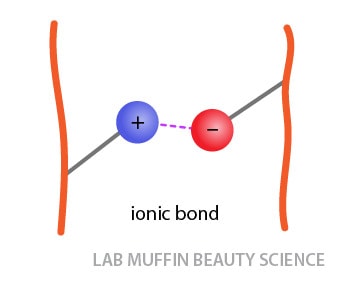 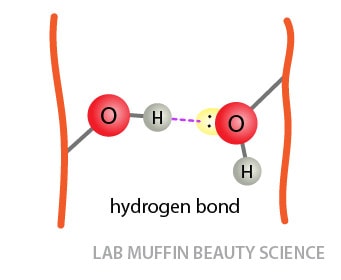 The first two types of bonds (disulfide and ionic bonds) don’t really change except when chemical treatments are involved, like in perming, relaxers, keratin treatments and acid rinses. It’s the hydrogen bonds that we’ll be focusing on.

While hydrogen bonds are generally weaker than the first two types of bonds, there are a lot more of them, so they can have a huge impact on the shape of hair.

When your hair dries in a weird shape from sleeping on it: that’s hydrogen bonds.

When you flat iron your hair: that’s hydrogen bonds.

And of course, when your hair loses its shape and goes frizzy when it gets wet: that’s hydrogen bonds.

Here’s the structure of water: 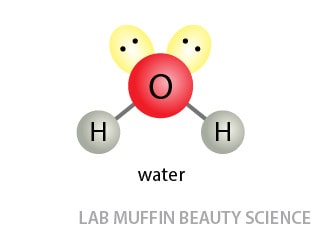 (Side note: Water’s incredible ability to hydrogen bond is pretty much responsible for every cool thing about water – why ice floats, why sweat cools us down, why coastal regions have less temperature fluctuations, why water can travel up to the top of trees…)

Water is also relatively small. That means that it can get into places easily – especially when that place likes water (is hydrophilic). That means that if you add water to a place where it can form hydrogen bonds – it probably will.

As well as water, the other main thing that breaks hydrogen bonds is heat. At a microscopic level, heating something increases its kinetic energy – that is, you’re shaking it, and the hotter you heat it, the more violently you’re shaking it.

Imagine a bunch of magnets stuck together. If you shake it hard enough, the magnets fly apart. Then if you move the magnets into a different arrangement and stop shaking it, the magnets will stick together into the new arrangement. Same deal with hydrogen bonds and heat.

Here’s what happens when you style your hair with water or heat:

Then along comes water, here to ruin your day. Here are some of the situations where water can break the hydrogen bonds in your hair and ruin your hairstyle:

One sure-fire way to ruin your hairstyle is by wetting your hair, like when you wash it. The added water breaks the hydrogen bonds, your hair goes back to its natural shape (which is influenced by other factors like disulfide bonds and ionic bonds). If your hair was originally frizzy, it’ll go back to frizzy.

This loss of hair shape can also happen when there’s high humidity, since that just means there’s lots of water in the air – the water keeps breaking the hydrogen bonds and your hair can’t retain its styled shape.

Interestingly, it’s not just high humidity that kills your hairstyle. Going from high to low humidity will do it as well!

If you’ve styled your hair at high humidity, it’s actually better to stay at that same humidity than to go to a less humid location. And if you style your hair at low humidity, an increase in humidity will also mess up your hair.

It’s because of something called equilibrium. Basically, things like to be distributed in a certain ratio.

A smell in a room, for example, will spread out until it’s evenly distributed. It’s practically impossible to keep a section of the room free of the smell, unless it’s perfectly airtight. 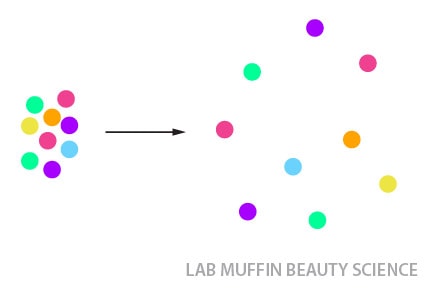 It’s similar with water in your hair vs water in the air.

There’s more water in your hair than in the air, but if the air around the hair gets drier, water will start seeping out of hair into the air. 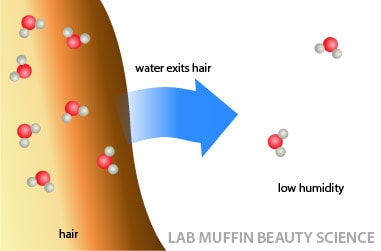 It happens in the other direction too – if the air around your hair gets more humid, water will start to enter your hair and stay there. Water will move until the ratio of water in the air and water in your hair is at an equilibrium. 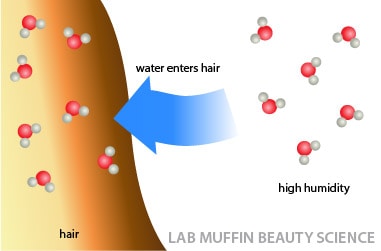 Examples of situations where water will move:

A similar thing can happen when you heat style your hair. Blow-drying with a regular hairdryer actually reduces the moisture in your hair, compared to when you let it dry without heat. For example, in this study, blow-dried hair had about 5% less water than air-drying at room temperature.

So blowdrying can have a similar effect to moving from lower to higher humidity – water will want to go back into your hair to reach equilibrium, which can wreck your style. A hair dryer that adds some water back into your hair – not as much as a properly humid environment – can actually help your hair retain a style better.

(Side note: This is a bit of an oversimplification, since heat drying of hair has a hysteresis.)

Other aspects of frizz

If hair acquires a static charge, then individual strands will repel each other and you get flyaways. A lot of hair products can decrease the build-up of charge. Interestingly, hair with higher moisture content is also less prone to flyaways – higher water content makes hair more conductive, so the charge can spread out more easily instead of building up.

Hair with a rough cuticle can also be frizzy. This can happen if the hair is damaged, or if the wrong products have been used, like a poorly formulated shampoo, or lack of conditioner.

« Video: Interview: Deciem’s Nicola Kilner and Minh Lawton
More Huge Skincare Myths, and What to Do Instead (Video) »