I’ve had a sneaking suspicion that you could oil cleanse without using a regular cleanser afterwards, if you repeatedly wiped off the old oil and added more oil to dilute the dirt (not quite what I said in this early post – but that was assuming that you only wipe oil on your face once). So naturally I had to test it out on my favourite guinea pig – me!

I was pretty hesitant to experiment on my face, considering all the effort I’ve gone to over the years to get it to a stage where I can leave the house without make-up some days without wanting the earth to open up and swallow me. My reasoning to convince myself went like this: 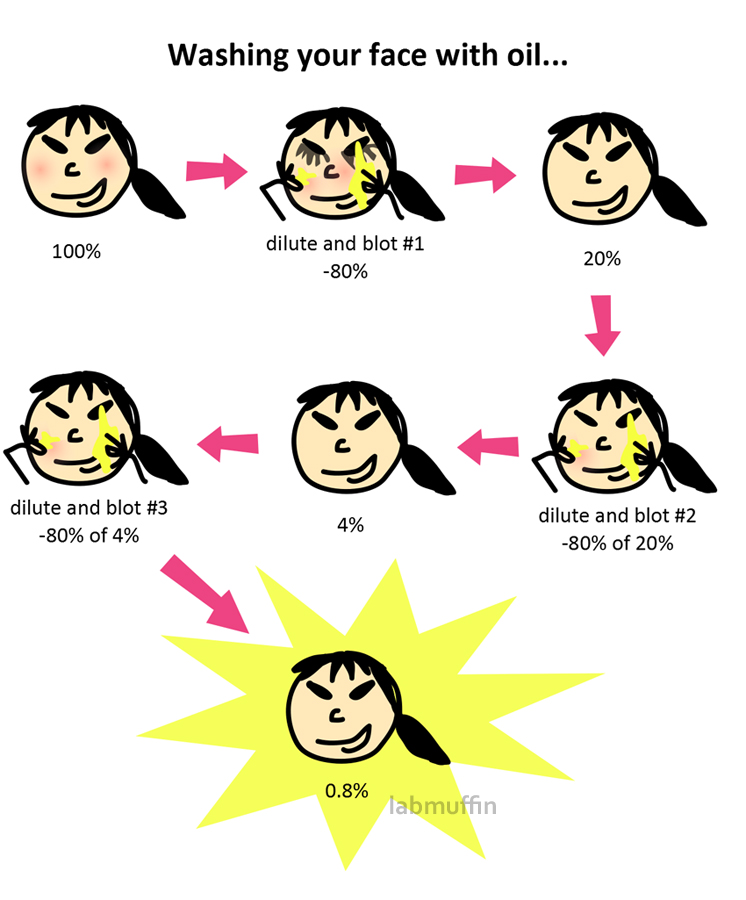 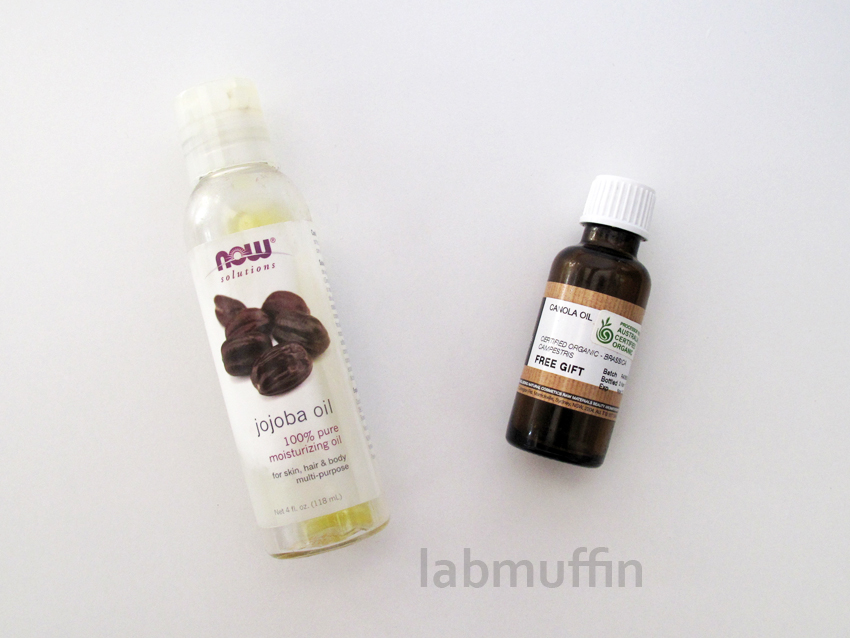 So I tried it out for a month straight…

– I used canola oil at first then switched to jojoba when I ran out (I’m sure any of the oils typically used for OCM would work just as well).

– I didn’t use any other cleansers on my face other than oil and Lush Angels on Bare Skin once a week (it’s oil-based and contains ground almond scrubbing grains, no surfactants)

– I didn’t massage the first three “oil rinses” too much as I didn’t want to push make-up into my skin. I splashed the oil on, spread it around for a couple of seconds, then wiped it off with a tissue.

– For the final oil rinse, I massaged the oil around my face for about a minute. I then stepped into the shower with a greasy face, and at the end I blotted my face with a towel. Surprisingly, after this routine, my face didn’t feel greasier than normal – just pleasantly soft and supple, not even oily.
– I’ve only ever washed my face at night – I only splash water on it in the morning and blot off with a towel, so I only went through this regimen in the evenings.

– I kept the rest of my routine the same (if you’re wondering why I haven’t reviewed many skincare and face make-up products lately, that’s why!). I kept using my retinol, AHA, BHA and vitamin C products, and kept to the same tried-and-tested moisturisers.

How did it go?

Excuse my bare face with the giant forehead that’s usually hiding behind a strategic fringe: 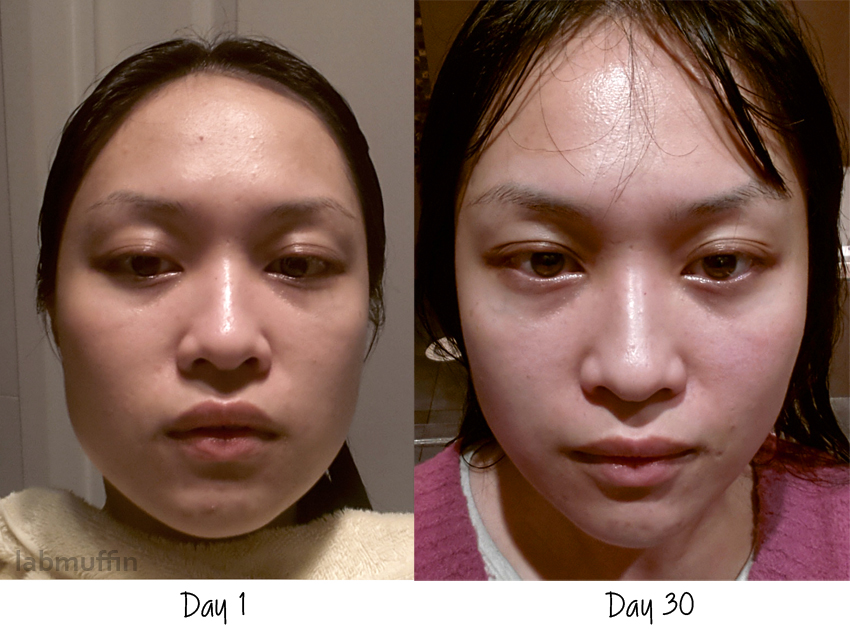 – Breakout free!!! To my surprise, I didn’t break out significantly more than usual, even though I wore more make-up (I’ve been working 6 days a week and sometimes went out on my day off too). So naturally I’m putting that down to my flawless logic above.

– Goodbye dry – I had a couple of dry patches under my eyes before I started, and winter usually results in some dry patches on my face every few days. None at all during this month – pretty impressive!

– No irritation. It’s winter here in Sydney, and usually my face will be a bit itchy after a warm shower and face wash – no more of that.

– Tap not needed – My bathroom was being renovated for most of this time, so there was one bathroom between four people who all shower at night, so having a tap-free washing routine was pretty handy.

– Oil control – Another surprise: my face was less oily than usual during this experiment. I’m usually oily a few hours after applying make-up, but with oil cleansing I lasted til late afternoon.

– Clogged pores begone – I’ve always had some issues with clogged pores (not-quite-blackhead bits) in that region under the eye, next to the nose. After a couple weeks of oil cleansing, there weren’t any left. My forehead usually has a few bumps too – I don’t think it’s ever been so clear!

– Time consuming – This was the biggest downside. After a full day of work and sometimes dance class as well afterwards, the last thing I wanted to do was rub oil on my face for five minutes before jumping into the shower!

– Less potent actives – I found that pimple marks took longer to fade, and the impact of my actives seemed less dramatic. I think this was because of the oily film that the actives had to pass through to get to my skin.

Overall, I don’t think continuously oil cleansing and avoiding surfactants for this long is a good idea for everyone – surfactants are quick and there are many well-formulated cleansers out there that aren’t very harsh. But if you’re prone to dry patches, cutting down your surfactant use to a couple times a week and replacing with oil cleansing is worth a try.

For me at least, successive cleanses with oil is thorough enough to remove make-up, without needing to follow up with a cleanser. Of course, your mileage may vary, depending on how sensitive your skin is, and how comedogenic your make-up is. This winter, I’ll be using this oil cleansing method a couple times a week, and using my actives on days when I’m washing with surfactant-containing cleanser. 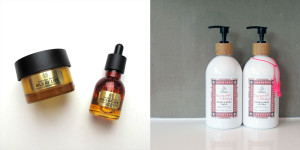 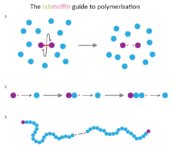 8 thoughts on “A Month Without Facewash”